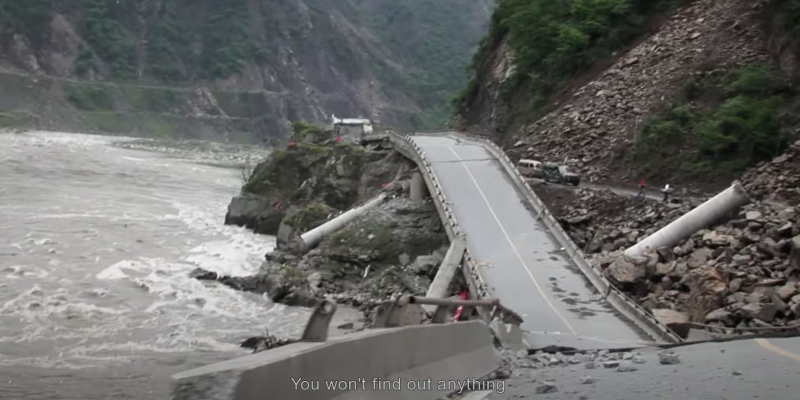 Screenshot from  Ai Weiwei's YouTube video channel from his documentary “深表遗憾” [So sorry] about the May 12, 2008 Sichuan earthquake.

Thirteen years after China was hit by a major earthquake in Sichuan, China, exiled Chinese artist of international acclaim Ai Weiwei is using his creativity and influence to keep the memory of the disaster alive through his most recent project on the social media platform Clubhouse. By reciting the names of the victims of the earthquake, most notably young school children, in the virtual discussion rooms, he hopes to push back against the Chinese government's censorship of the events.

Meanwhile, the Chinese government continues to censor the role of corrupt local authorities who skirted laws on school construction safety, leading to the deaths of 5,000 school children.

Sichuan is one of the most populated provinces of China, prone to earthquakes because of its location on the Longmenshan Fault line. The 1976 Tangshan earthquake that caused the death of between 250 to 700,000 victims, depending on estimates, lives in the collective memory of locals. When a 7.9 magnitude earthquake hit the Chinese southwestern province of Sichuan on May 12, 2008, the whole country froze. The initial sense of alarm was rapidly confirmed: an estimated 70,000 people died, mostly in Wenchuan, the epicenter of the earthquake in the center of Sichuan.

For the Chinese government, the disaster hit at a particularly sensitive time: three months before the 2008 Beijing Olympic Games. The international event was cause for unprecedented national pride, as it was the first time China had ever been awarded the games. The country was in a festive mood, and under increased international media coverage.

So the government wanted to act swiftly to show nothing could deter it from hosting the games, and that it could cope with the security of large crowds. The authorities concentrated their efforts in providing rescue and humanitarian aid.

One fact emerged rapidly: an unusually high number of victims were students, in a country that still applied at the time a strict one-child policy. Given the local time of the earthquake around 2:30 p.m., many children were in school and died crushed under collapsing roofs. The phenomenon even got its own name,  豆腐渣校舍, or tofu schools, in reference to their rapid collapse in comparison to other nearby buildings. Chinese officials admitted “substandard building materials” played a role in the devastation.

The authorities, hoping to avoid a scandal just before the Olympics, were quick to cover up that particular aspect of the disaster, despite efforts by investigative journalists and family members of the victims to demand explanations. The government only started to admit possible failures in safety standards after the 2008 Olympics were over. Yet, the families demanding a full investigation on the case were still harassed by the police five years after the fact and the government refuses to this day to admit full responsibility.

Digging the truth about the real number of school victims

Back in May 2008, Chinese artist Ai Weiwei immediately joined the group of daring voices requesting full transparency, as he recalls in this interview with Global Voices:

I went to Wenchuan shortly after the earthquake. My goal was to experience an earthquake of such proportions, because I was left speechless, and couldn’t find the words to describe my inner emotions, thus I needed to go. Of course I went to many school sites and saw the ruins.

The Wenchuan earthquake is very important for me: it was the first time in my life that I encountered such a big disaster. I became involved because I felt somehow desperate at that time. I had to go to Sichuan to investigate the number of dead school students, because we all know that the government has always been vague, when it said it wanted to investigate the situation. Wen Jiabao [China’s head of government from 2003 to 2013] has repeatedly said that we want to investigate corruption projects in schools, but it was never done.

In the face of the government's censorship, Ai launched a project called Citizen Survey that sent over 40 groups of people to Wenchuan. Despite being arrested by the police dozens of times, and being forcefully sent back to Beijing, the groups compiled a list of 5,197 names. All of this research, as well as three documentary movies, and interviews with family of victims, are available on a website 5122018.com that is blocked inside China.

The list of all the children who died while inside schools, which was compiled by this team, was completed thanks to painstaking interviews with families and under a ban from the government to establish any independent investigation. A full list of names was printed and glued to the walls of Ai's Beijing studio in 2013, with a recording of the names read, as can be seen and heard in this video:

In 2013, Ai Weiwei also created an audio art project, called 喊 [To shout or to cry] in which he shouts more than 2,000 names of that list until he became hoarse and had to stop, as can be heard in this recording:

A voice memorial on Club House

Due to permanent attacks and harassment by the Chinese authorities, and a 81-day long detention in a secret prison in 2011, Ai Weiwei left China in 2015, but continues to rise as a global artist and activist highlighting sensitive issues around China's human rights record, the failure of the West in the face of migrants, the COVID-19 pandemic.

One of his new platforms is the audio-only social media platform Clubhouse that gained huge popularity in February 2021 after Elon Musk used it for a press conference. The platform allows users to host discussions on any topic for up to 5,000 people, so the Chinese authorities censored it in February after it was used to discuss issues around Tibet, Xinjiang, and Hong Kong. Yet technology-savvy residents of mainland China still manage to access it via VPN (Virtual Private Networks).

As Ai Weiwei explains, this means Chinese-speaking rooms on Clubhouse are a unique and uncensored space where Chinese people from Taiwan, China, Singapore, the U.S., Australia, Japan, and Hong Kong can meet and talk. This gave him the idea to give a new life to his project 念 [to read aloud, or to miss someone] of reading the names of the child victims, but in a new format. As he told Global Voices:

I was thinking on how to use this platform for an artistic project, since I am an artist. So with a few friends, we decided to do one, and simply to call it “read aloud”. The project overseas Chinese from three regions: Europe, Beijing and Australia, and the East coast of the US. With those three regions, we can have a 24h coverage. But this is quite difficult in fact, because as a room moderator, if you lose contact [in case of an external phone call, for example], there is a risk and the room shuts down, so you need two people as moderators.

In fact, the nature of this project is to be large-scale, participatory form of behavioral art. Its mission is to commemorate the students who died in the May 12 earthquake. The idea of commemoration looks simple, but the only way to put that into practice is to act it out. And that is not so simple. In fact, speaking and acting are two different things, from a philosophical perspective. The Chinese have a proverb: 听其言，观其行, which means “Do listen to words, but watch the deeds.” Well, I think Chinese people do align their words with their deeds, similar to the English expression: “Talk the talk. Walk the walk.” So we decided to give it a try.

As Ai remarks, in the beginning of this room, which started soon after Sweeping-Tomb day, a traditional Chinese festival held on the 15th day of the spring equinox when Chinese people pay visits to cemeteries, the virtual Clubhouse room had about 500 people. Yet recently, the number of participants has dwindled to as little as 12 people. Yet according to Ai, the numbers do not matter, what really counts is this:

I believe that the time we spend in the room is very important, because through this act, we are acting out of the belief present in our hearts and minds about what should be done. Besides, thanks to this large social movement that spreads over time, 39 days all in all, we can witness the world's attitude towards this issue and whether it is ready to take part in the commemoration or not.

Beyond the May 12 commemoration, Ai Weiwei is determined to challenge the political culture of secrecy of the Chinese Communist Party (CCP) by continuing his fight against the erasure and twisting of historical memory, whether it is about the June 1989 Tiananmen Massacre, the initial cover-up of the COVID-19 pandemic in Wuhan in 2020, the situation of Uyghurs and Tibetans in China. As he concludes:

Before the PRC [People's Republic of China] was established [in 1949], the CCP was an underground party. All the work it conducted was secretive. This party has been in power for 100 years, but its practices remain those of an underground party. This extends to the oath to become a party member, valid for its current 90 million members, which includes this sentence: ‘protect the party's secrets’. I mean, you have been in charge of this country for almost 80 years, your party is 100 years old, what kind of party secrets can there be left to protect? Why do you have to keep the party's secrets? This secrecy is very useful and effective because it is there to guarantee its rule.