After a series of abuses, citizens demand reforms 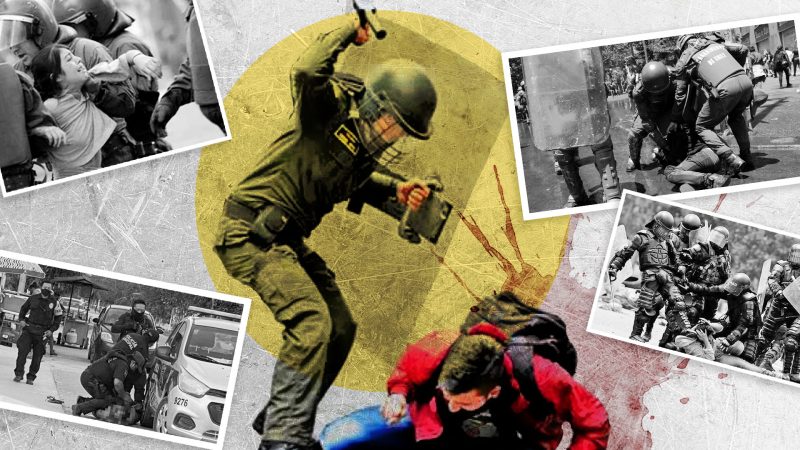 Written by Suhelis Tejero for Connectas, edited and updated by Global Voices.

In broad daylight and in full view of everyone, a woman lay down on the ground with a police officer's knee on the back of her neck on a street in the tourist resort of Tulum, Mexico. Victoria Salazar Arriaza, a Salvadoran migrant, cried out in distress and her body went limp. Her death, which sparked international outrage, was caught on video and showed once again that police brutality is rampant in Latin America.

Just a few days later, in Villa Altagracia, Dominican Republic, a couple who are evangelical pastors were returning from preaching with some followers when the police “mistook” the vehicle they were traveling in for that of alleged criminals. The survivors do not remember hearing an order from the police patrol to stop. Only the twelve gunshots that killed the newlywed couple.

Since late April, videos showing protesters in Colombia killed by police bullets have been shared thousands of times on social media. As of early May, at least 19 people died and hundreds were injured in the 2021 Colombian protests that began against a tax reform and then turned into demonstrations against rising inequality and state repression. More videos revealing a large repressive security apparatus continue to flood social media.

These episodes are the latest results of more repressive approaches which have become more present in police forces around the world, as witnessed by the people of Minneapolis in the United States in April. The phenomenon in Latin America is compounded by its historical problems of violence, impunity, and weak institutions.

Acts of police violence in Mexico are becoming more and more common, but the case of Victoria Esperanza Salazar was among those that most shocked Mexico…

“Police violence in Latin America is often the result of widespread impunity, a lack of oversight, and an institutional culture of opacity that tolerates and sometimes encourages abuse,” said César Muñoz, senior Americas researcher at Human Rights Watch, in an article published by The New York Times last November.

In general, people across the region do not have much confidence in the police. At least, that is what is shown in the surveys conducted by Barómetro de las Américas in recent years. The 2019 regional report showed that, at best, 53 percent of the population trusted the police, as was the case in Brazil that year. However, in other countries such as Mexico, Paraguay, Guatemala, and Peru, barely a third, or even less, of the population said they had faith in the police forces.

An important factor behind this mistrust has persisted through the years: military-style training which prevails over the idea of the civilian service that police officers are supposed to provide. In some countries, this has clearly identifiable origins: some security forces were created during the years of the region's many dictatorships, such as in Chile, Brazil, and the Dominican Republic. In others, such as Colombia, the police were involved in the fighting during the worst moments of the war against armed groups.

In fact, in Colombia's case, Barómetro surveys show that the public to some extent regained confidence in the police after 2016 when the Colombian government and the Revolutionary Armed Forces of Colombia (FARC) signed a peace agreement. From 34.9 percent confidence in 2016, it rose to 42.4 percent two years later, although recent events suggest that this percentage may have dropped substantially.

The militaristic influence is still there. In Colombia, Brazil, and Peru, for example, the legal system does not treat police officers as civilians, at least not judicially. When a police officer commits an abuse or uses excessive force in the exercise of their duties, they are tried by military courts, even though in a strict sense they are not part of the armed forces.

The World Organisation Against Torture, an umbrella organisation of more than 200 non-governmental institutions around the world, recently expressed its alarm at the “disturbing trend towards militarisation” of civilian police forces internationally.

The Inter-American Dialogue (IAD), a U.S. think tank, wrote in their report that uniformed police forces have been transformed into “hyper-hierarchical structures with high levels of concentration of power and decision-making,” with divisions similar to those of the military.

The organization also stressed an issue that characterizes the functioning of the region’s police forces: the control of protests. IAD highlighted the case of Nicaragua, whose police force for years focused on preventing crime and had a close relationship with the public, but since 2018 has taken part in the repression of protesters and critics of Daniel Ortega's government. A similar picture of police brutality against protests has been seen in Venezuela in 2014, and in Chile since the end of 2019.

It was in Chile that Gustavo Gatica suffered his worst moment. “I saw little stars everywhere, like in cartoons, and then everything went black,” he told the BBC. Gatica was blinded after Chilean police known as carabineros fired small bullets at his face in 2019, and became the symbol of the victims of police repression there. Using non-lethal weapons against demonstrators, police officers severely injured hundreds of participants during the first months of the nation's social unrest in 2019.

Acts of police violence, such as the repression of demonstrators in Chile or the death of the evangelical couple in Dominican Republic, have caused enough outrage for these governments to hasten to announce police reforms, something that for years had been absent from the political debate, despite calls from human rights organisations.

The task is more difficult than it seems. One of the police officers arrested for the death of the evangelical couple admitted under questioning that he and his colleagues fired “on instinct,” almost mechanically, at the couple's vehicle. In Mexico, Victoria Salazar’s death was not an isolated incident, as the police force in Quintana Roo has a long history of abuses against the public.

It remains to be seen then, as the months pass and the furor fades, if governments’ promises will become reality and begin to leave behind a militaristic culture that has been ingrained for many years.