'Any limitation on freedom of religion must be non-discriminatory' 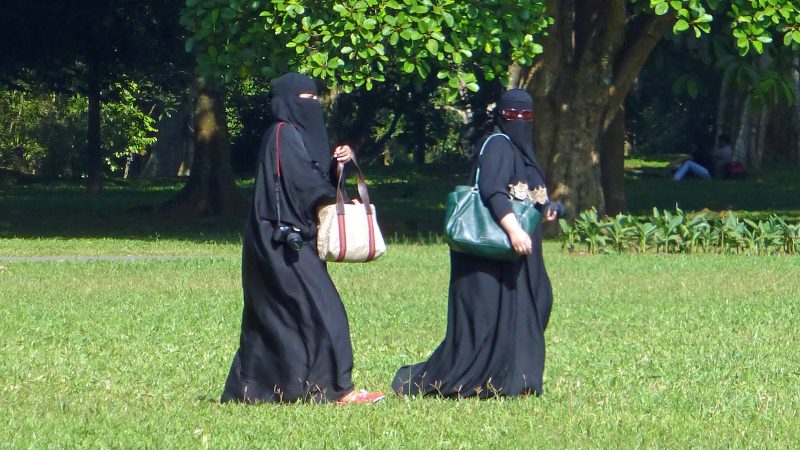 Women wearing the niqab at the botanical garden in Kandy, Sri Lanka. Image via Flickr by Ji-Elle. CC BY-SA 3.0.

This post by Savitri Hensman originally appeared in Groundviews, an award-winning citizen media website in Sri Lanka. An edited version is published here as part of a content-sharing agreement with Global Voices.

On April 27, the Sri Lankan Cabinet approved a proposed ban on wearing burqas and other full-face coverings in public. The proposal is expected to be passed by parliament where the ruling Sri Lanka People's Freedom Alliance coalition has an almost two-thirds majority. This follows other measures by the Sri Lanka government, including a ban on cow slaughter, shutting down religious schools and a new Prevention of Terrorism regulation that targets Muslims and other minorities.

Many in Sri Lanka, and internationally, have condemned this impending ban as a breach of human rights. The United Nations Special Rapporteur on Freedom of Religion or Belief, Ahmed Shaheed, commented that such a ban goes against international law:

Burka bans are incompatible with int’l law guarantees of the right to manifest one’s religion or belief & of freedom of expression!

Minister of Public Security Sarath Weerasekara had earlier claimed that the burqa affects “national security” and was a “sign of religious extremism.” Yet, the ban is likely to damage, rather than improve, national security and is considered a dangerous distraction from attempts to tackle the coronavirus pandemic. It undermines the building of trust which would help the nation to unite to counter the rise in infection.

The background to the ban includes a gradually worsening situation for Muslims and other minorities, as well as dissidents in Sri Lanka which, as in the past, has paved the way for a wider erosion of human rights and democracy. This has included harassment and attacks by hate groups misusing Buddhism to gain power, shielded by the regime. There have also been attempts to blame the entire Muslim community for the Easter Sunday bombings on April 21, 2019, despite the fact that many Muslims had previously pleaded with the authorities to act against the ringleaders, added to which Indian intelligence had provided specific warnings not long before the attacks.

After the 2019 bombings, there was a temporary ban on wearing face coverings in public that can conceal someone's identity, supposedly on national security grounds. However, that ban—while added to the stigma Muslims faced—offered little actual advantage since female security officers could have conducted checks on any woman while offering them enough privacy to unveil themselves.

Victimisation and harassment continued after the ban was lifted five months later, while repression generally got worse and human rights and democracy eroded. This took a fresh turn during the pandemic.

Cruelly, grieving relatives of Muslims who had died of COVID-19 were—for 11 months—denied the opportunity to bury the dead as is required by their faith, with the government insisting instead on cremation on the spurious grounds of public health. Elsewhere in the world, burials continued as normal, since these presented no threat to the public. In early 2021, the government finally gave way but initially chose, as a site on a remote northern island that would have been highly unsuitable. After protests, the location was shifted, although burying loved ones still involved long journeys for many.

Furthermore, on March 9, a regulation was passed allowing for people to be detained for two years without trial if accused of causing “religious, racial, or communal disharmony.” This was an expansion of the already harsh Prevention of Terrorism Act (PTA), allowing the state to hold people in “reintegration centres” without proof of wrongdoing. This drew international condemnation.

As the International Commission of Jurists (ICJ) pointed out, freedom of religion and belief is guaranteed under Article 18 of the International Covenant on Civil and Political Rights (ICCPR), of which Sri Lanka is a signatory. Any limitation on freedom of religion must be non-discriminatory and must be necessary and proportionate to protect public safety, order, health, morals or the fundamental rights and freedoms of others.

According to the UN Human Rights Committee, under the ICCPR “the observance and practice of religion or belief may include not only ceremonial acts, but also such customs as … the wearing of distinctive clothing or head coverings.” As the ICJ's Legal and Policy Director Ian Seiderman pointed out:

The Sri Lankan Government’s justification for banning face coverings rings hollow during a time when it has quite sensibly made the wearing of face masks in public mandatory to address the COVID-19 pandemic.

Freedom to have or adopt a religion or belief of one’s choice is also guaranteed by Article 10 of the Constitution of Sri Lanka. Under Article 12, all persons are equal before the law and no citizen should be discriminated against on the grounds of race, religion, language, caste, sex, political opinion or place of birth. Article 14 (1) (e) ensures the freedom to manifest one’s religion or belief in worship, observance, practice and teaching.

In some parts of the world, there has been support for banning the burqa because of the belief that it is oppressive to women. Yet even if people reject those strands within major religions which have more restrictive attitudes on gender, giving male politicians or police officers the power to dictate how women should dress, and to use force against those who fail to obey, is far from liberating.

Far from increasing national security, a burqa ban alienates Muslims further and promotes an approach to politics based on division and abuse of power. Such a move would result in constant flashpoints on the streets, deeper isolation of women, and a sense of humiliation even among those who would not dream of wearing burqas. This would weaken yet more the position of Muslims seeking a peaceful, multicultural Sri Lanka.

Researchers studying countries in Europe that had put restrictions on wearing veils in public spaces found, in 2019, that far from reducing extremism, these restrictions correlated with an increase in terrorist activity. The research team, Stuti Manchanda and Nilay Saiya from Nanyang Technological University in Singapore noted that “states that enforce veil bans are indeed statistically much more likely to experience more and more lethal Islamist terrorist attacks than countries where such laws do not exist.”

The burqa ban is a dangerous game to play, especially amidst a pandemic, when trust and mutual care may be vital in reining in the destructive spread of the virus. Acts of concern and solidarity which build bridges across communities may make a major difference in the long term, however grim the current situation may be.