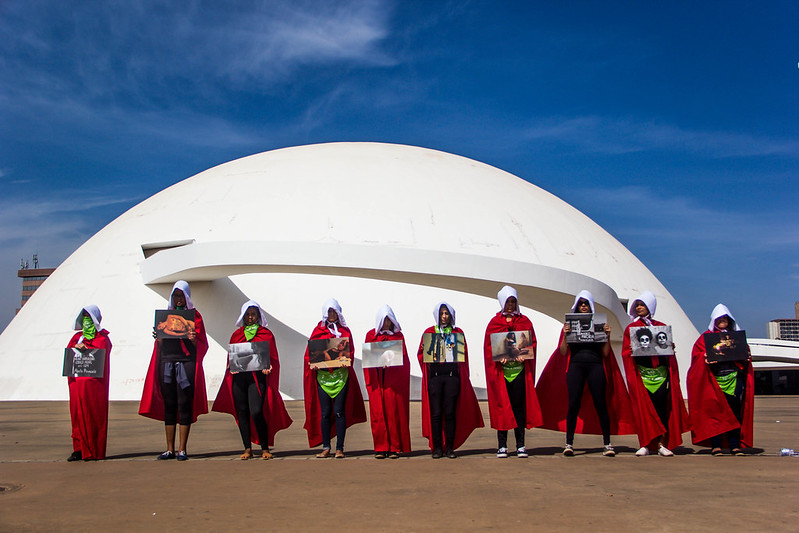 Women protest in Brazil's capital Brasília for safe and legal abortion in the country, in 2018, wearing The Handmaid's Tale's costumes | Image: Mídia Ninja/CC 2.0

A bill pending in the Brazilian Senate seeks to make access to legal and safe abortion more difficult even in cases when it's guaranteed by law.

The initial proposal says it will “safeguard the unborn child's life since conception” and proposes the creation of a social financial aid fund for rape victims’ children if the woman carries the pregnancy to term. In addition, the bill states that the woman must provide information to the father about the child, even if he is a sexual abuser.

Outside of these contexts, the practice is considered a crime, with a prison sentence of one to three years for the woman, and one to four years for those who perform the procedure. 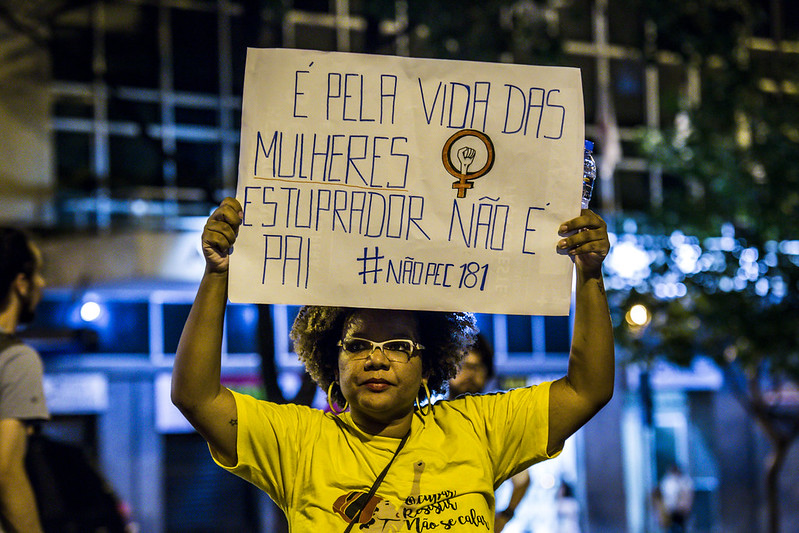 The pending bill is not exactly a new idea — a few years back, a similar proposal was presented in the National Congress, known as the Unborn Statute, which would have forbidden abortion in all cases in the country. Another one was a theme in protests in 2017. An online petition against a rape subsidy has garnered more than 192,000 signatures since 2018 when it was launched in protest of the Unborn Statute.

For critics, the new bill is an imitation of this old proposal.

The bill was presented by senator Eduardo Girão of the center-right “We Can” Party (Podemos in Portuguese) last December. Girão proposed what he named as the “Pregnant Woman's Statute” that he said would be an advance in the “humanitarian point view” by protecting pregnant women and holding men accountable.

Feminist movements, on the other hand, see the financial aid as an excuse to avoid the right to safe abortion and called the idea a “rape subsidy.“

Since the proposal is set to be voted in the National Senate soon, reproductive rights activists started to use hashtags such as #GravidezForcadaÉTortura (Forced Pregnancy Is Torture) and #BolsaEstupro (Rape Subsidy) on Twitter to protest against it.

After the criticism, the project's rapporteur, senator Simone Tebet of the center-right Brazilian Democratic Movement (known by its acronym MDB) declared she would be working on changes to the original text. Senator Girão himself said in March he would withdraw the aid proposal from the project, according to Crescer magazine.

Global Voices reached out to Tebet's office, but didn't have a reply until the publication of this article.

An international network of doctors who defend access to comprehensive reproductive health care, Global Doctors for Choice, released a public statement calling the proposal a “true setback to fundamental human rights in country.”

“It doesn't solve it just to decide to remove articles from the statute. We, the women's movement, are fighting for it to be shelved,” physician Maria José de Oliveira Araújo, a member of the group, told newspaper Brasil de Fato back in April.

Jolúzia Batista, who works at the Feminist Center for Studies and Advisory (CFEMEA for the Portuguese initials), a feminist and antiracist NGO, also told to the same newspaper, that the project is a conservative trap to take away women's autonomy over their own bodies.

“The statute removes the possibility for a woman to decide over her body, her life and life projects she wants for herself. We understand that, in order for us to achieve a true democracy, one of the key points is that women should be able to decide over their own bodies,” she said.

“As if the woman has no rights at all”

Despite being called “Pregnant Woman's Statute,” the bill doesn't actually include public policies or elements directed at pregnant women's rights, according to activists.

For instance, Article 8, an excerpt that has been strongly repudiated by women's rights organizations, prohibits any kind of harm to an “unborn child” due to “the act or decision of any of their parents,” which could penalize doctors who perform legal abortion.

Women's rights organizations also criticize Article 10 since it forbids pregnant women “to deny or omit” information about paternity to biological fathers. This means that she would be required to provide information to the father  — in some cases, a rapist — about the child under a “liability penalty.”

“This obligation to inform the father about the child — a rapist — under a ‘liability penalty,’ is too violent. It is as if the woman has no rights at all, but the unborn child, and the man, have them all,” Luciana Boiteux, professor of law at the Federal University of Rio de Janeiro and author of motions at the Brazilian Supreme Court for the decriminalization of abortion in the country, told the site Congresso em Foco.

Abortion is considered a crime under some or all circumstances in most countries in Latin America, according to a study by the Center for Reproductive Rights. In Brazil, there are 40 projects at the Lower Chamber proposing some kind of restriction to the current legislation, according to UOL news outlet.

Even where it is allowed, terminating a pregnancy is not always easily available due to social criminalization and stigma, the lack of facilities and qualified professionals, and the absence of family planning and sex education policies.

There is also the concept of “conscientious objection” — when physicians recuse themselves of performing abortions claiming personal reasons. To Brazilian anthropologist and researcher, Debora Diniz, this has been used as an instrument of power and abuse, as she pointed out during the GV panel “Breaking the taboo on abortion,” on April 7.

“When we ask if someone is pro or against abortion, what we get is not what people do, we get lies. What dominates is morality based on public opinions, which do not represent the needs, rights or tastes of women. They represent the patriarchy and hegemony of how to answer this question correctly,” she said during the panel.

Latin America and the Caribbean have some of the highest abortion rates in the world and the strictest laws, which can put women in prison for suspected abortions, according to Diniz.

The Guttmacher Institute points out that the rates of unwanted pregnancies are higher in countries that restrict access to abortion and lower in countries where the procedure is legal.

“In some part of life, Brazilian women will cross the line between legality and clandestinity, because one in five women commit abortions up to the age of 40,” said Diniz.

On Dec. 30, 2020, Argentina became one of the few Latin American countries where abortion is legal no matter the reason, if performed in the first weeks of pregnancy and according to the guidelines established by law, along with Uruguay, Cuba, Guyana, French Guiana and Puerto Rico.

Abortion is also legal in Mexico City and the Mexican state of Oaxaca. Some Mexican states, however, still consider the termination of pregnancy punishable by up to 30 years in prison.

Abortion is illegal under all circumstances in El Salvador, Honduras, Nicaragua, Dominican Republic and Haiti. Other countries in the region allow abortion under certain circumstances.

Hours after Argentina approved abortion legalization, Brazilian President Jair Bolsonaro tweeted saying he was deeply sorry for the decision and stating: “As far as it depends on me and my government, abortion will never be approved. We will always fight to protect the lives of the innocent.”

“Criminal laws are not the best way to protect health needs, and abortion is a health need,” said Diniz.