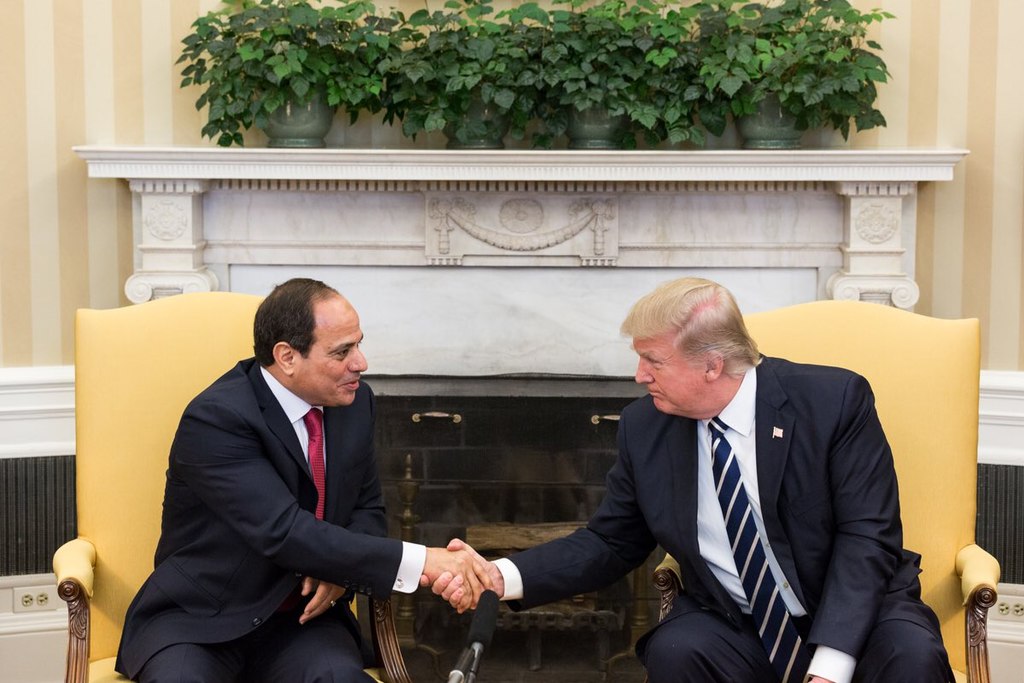 Former U.S. President Donald Trump had described Egyptian President Abdel Fattah el-Sisi as his “favorite dictator.” Above, Trump welcomes the Egyptian president to the White House in April 2017. Photo: Office of the President of the United States. Public domain.

On May 8, Human Rights Watch endorsed a list of seven measures put forward days earlier by several leading Egyptian human rights groups, which the groups said was meant to test recent claims by the government of its intention to rectify its poor record of human rights violations.

The #First7Steps put forward by the Egyptian Initiative for Personal Rights, Association for Freedom of Thought and Expression, El-Nadeem Center against Violence and Torture, Arabic Network for Human Rights Information and the Egyptian Commission for Rights and Freedoms are, according to the groups:

the minimum to gauge meaningful improvement in the dismal human rights situation, and only include immediate measures that can implemented tomorrow morning if a political decision is made to that effect.

The proposed steps, which were also supported by Amnesty International and PEN, included freeing the thousands of political prisoners detained or imprisoned for their peaceful actions—regardless of their backgrounds or political beliefs. Egypt has come under increasing and repeated international criticism for having jailed thousands of people since the 2013 military takeover, with human rights groups saying the crackdown on dissent which ensued has led to around 41,000 people being arrested or prosecuted. An Interior Ministry official said in July 2014 that 22,000 people had been detained since July 2013.

The groups also called on the government to terminate the “endless” detentions that have been systematically used as a “tactic to keep critics in indefinite pretrial custody by launching multiple cases against them.” According to a report published by the Tahrir Institute for Middle East Policy in February:

In recent years, Egyptian authorities have increasingly turned pretrial detention from an exceptional legal measure to a punitive tool used regularly against human rights defenders, journalists, and individuals perceived to be critical of the government. They have done so both using the law and working outside of it—most recently in reliance on two practices: “rotation” (tadweer) and detention pending multiple cases.

The #First7Steps were circulated as Egyptian authorities took a number of decisions in recent months that were welcomed, amid a restrained and unsafe political and civic space. On April 14, authorities released two local journalists, Solafa Magdy and her husband Hossam el-Sayyad, after they had spent about a year and a half in pre-trial detention.

A picture worth a thousand emotions.

Egyptian journalists, Solafa Magdy and Hossam alSayyad released & reunited with their family. Their son, Khaled, now has both of his parents back.

Both had been arrested since Nov 2019. #Egypt pic.twitter.com/b1Sinwnp3u

Khaled Dawood, an opposition leader and former head of the liberal Dostour political party who had spent more than a year and a half in pre-trial detention, was released the day before.

Also, earlier in April, an Egyptian court dropped a case against 20 non-governmental organizations (NGOs) for what had been dubbed the “foreign funding” case. This was the latest development in a drawn-out trial that began in 2011, and in which dozens of local and international NGOs had been charged with receiving foreign funds illicitly and using them to conduct banned activities. While a verdict was pending, many local human rights organisations were harassed, and dozens of activists had their assets frozen and were barred from traveling abroad.

The court's ruling and a similar one in December regarding several organisations were seen as signs of goodwill offered by the Egyptian government towards U.S. President Joe Biden, who had pledged in his presidential campaign that there were to be “no more blank checks” for his predecessor's “favourite dictator,” using Donald Trump reference to Egypt's President Abdel-Fattah el-Sisi:

Mohamed Amashah is finally home after 486 days in Egyptian prison for holding a protest sign. Arresting, torturing, and exiling activists like Sarah Hegazy and Mohamed Soltan or threatening their families is unacceptable. No more blank checks for Trump’s “favorite dictator.” https://t.co/RtZkbGh6ik

While charges have been dropped in several of these cases, other NGOs and activists are still facing trial. This led the #7FirstSteps demand for an end to “criminal prosecutions of human rights activists and [to] close the infamous Case 173 of 2011 (“Foreign-Funding” Case) targeting civil society organisations.”

The human rights groups’ seven steps also included lifting the state of emergency which was imposed in 2017 “in violation of the Constitution that authorities have exploited to suspend all due process rights.”

Suspending all executions in political and criminal cases until they are reviewed by a specialized presidential pardon board, was also among the groups’ demands. In recent years, Egypt has seen numbers of executions soar. A December statement by Amnesty International noted:

The Egyptian authorities have embarked on a horrifying execution spree in recent months, putting scores of people to death, in some cases following grossly unfair mass trials

The human rights groups also demanded the withdrawal of the draft personal status law which women say is worse in terms of legal rights than a current law that is already restrictive. Among many issues, the law would prevent women from signing their own marriage certificates, registering their child’s birth or traveling abroad without a man’s consent. The law stoked outrage in March, with women's rights groups deeming it discriminatory. Taking to social media after the draft bill was leaked by the press, and using the hashtag #Guardianship_is_my_right, women and men shared personal stories of how the current law has caused them hardships by denying mothers and wives full legal guardianship over themselves and their children.

Finally, the #7FirstSteps also urged Egyptian authorities to reverse the blocking of websites “imposed illegally in the absence of court orders to censor critical media and content.” According to Freedom House, 546 websites were reported blocked by the authorities at the end of the first quarter of 2020.

The five groups called on all civil society organizations, political parties, unions, individuals, and Egyptian communities abroad and regional and international bodies to endorse these seven steps as minimum requirements to begin restoring the dignity and rights of all Egyptians.

The Egyptian government, which has previously denied holding any political prisoners or any violations of human rights, has not yet commented publicly on these calls.