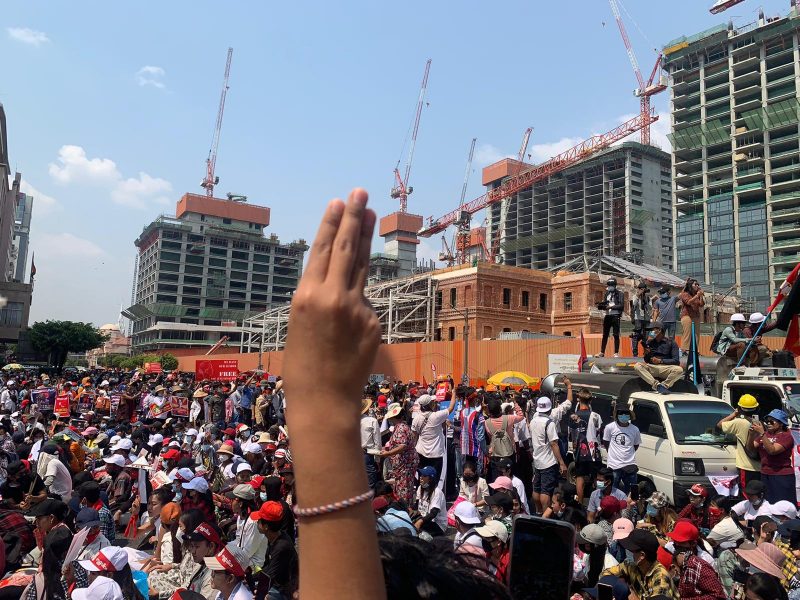 An anti-coup rally in Myanmar. Photo shared by a citizen journalist, used with permission

Three months after grabbing power, the Myanmar military government continues [2] to face questions about its legitimacy to rule the country. Despite ousting elected parliament members and detaining key leaders of the former ruling party, the junta has failed to convince large segments of the population to accept its authority in establishing a transitional government.

On April 22, Global Voices organized a webinar that tackled the situation [3] in Myanmar and the prospects of the resistance movement. The webinar [4] featured several testimonies from Myanmar residents who shared the impact of the coup in their communities and how people are resisting the junta. For obvious security reasons, we decided not to invite them during the webinar or publish their names in this article.

The resistance movement emerged since the first day of the coup and it continues to gather support across the country despite the terror tactics unleashed by the military against protesters, residents, journalists, and other suspected sympathizers of the opposition. One resident told us about the significance of the Civil Disobedience Movement or CDM in giving hope to those who wanted to restore civilian rule:

Since the coup, the civil disobedience movement—which most people call the CDM—has gathered support from people from a wide range of professions, led by medical and healthcare workers and later by Myanmar train workers. Bankers, lawyers, teachers and engineers across the nation have also demanded the military return the elected government to power, and are refusing to return to work. Many civilians are supporting the CDM by donating and fundraising to support CDM participants financially.

As a citizen of Myanmar, I would like to emphasize that we the people of Myanmar support the CDM and believe that it is important to resist the junta in every possible way, and the CDM is the sign of that resistance.

Another testimony told of the dangerous situation in Yangon, the country’s main urban center.

Yangon, the commercial capital where I live, has been taken over by the military junta. All you see is small undernourished boys carrying guns that weigh more than them cordoning off roads, harassing and intimidating innocent civilians at checkpoints. I leave my smartphone home when I go to my local wet market. Most of us have switched to keypad phones to stay safe, plus there is no point in taking a smartphone because there is no cellular data or internet available. On top of that, there is a night curfew and night raids that have increased. If you have a house guest you need to register them. If you don’t, the ‘informers’ will do the job for you.

A visitor to Myanmar who got stranded during the coup described the experience of seeing several massive protests after the coup:

I witnessed thousands of people marching on the street. Everytime they passed by, the bystanders, people at the side of the street, in their cars, in their motorcycles, in their shops, in their houses, would give them a round of applause and all will flash a three-finger salute which has now become the symbol of the protest. After the march, they will hold a program where speakers will speak about the legitimacy of their cause and their demands. They will also sing revolutionary songs the most popular of which is “Kabar Ma Kyae Buu” which is sang to the tune of the “Dust in the Wind” and contained the lyrics, “we will never forgive and forget the dictators”.

The visitor asked activists to compare the anti-coup movement today and the struggle against the junta in 1988 and 2007:

I then asked them the difference between the current protest and the 8888 protest in 1988 and the Saffron Revolution in 2007. They told me the big difference is, now they have the technology and communication to coordinate their actions and to tell the world what is happening in Myanmar.

Finally, a citizen spoke of believing that the junta will not succeed in defeating the pro-democracy forces in Myanmar:

Pandemic has a vaccine to protect and patients could be recovered but there is no vaccine to protect unarmed civilians from random shootings, tortures, sending back death bodies to their families next morning after being arrested and brutal oppressions by the military butchers.

The military junta could only terrorize our country but they can't rule. They could shoot, kill and arrest our young heroes called “Spring flowers” but they can't avoid Burma's Spring.