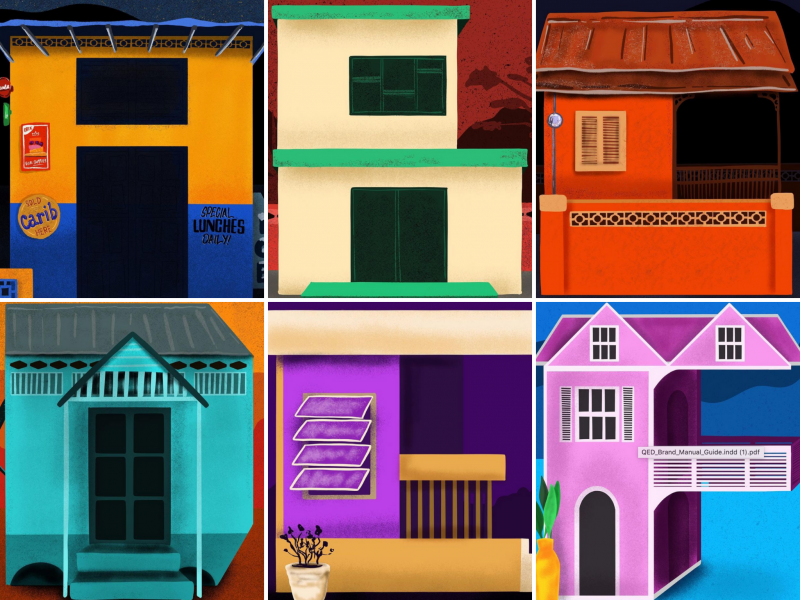 The ABCDEs of the Caribbean architectural alphabet, by artist Nicholas Huggins. Instagram images used with permission.

Trinidadian artist and graphic designer Nicholas Huggins recently completed an interesting experiment. There's an annual online project called 36 Days of Type, which “invites designers, illustrators and graphic artists to express their particular interpretation of the letters and numbers of the Latin alphabet” for 36 consecutive days. Having observed the submissions over the past few years, Huggins decided to take up the challenge by doing something different—creating an architectural alphabet of the Caribbean.

In an email interview, Huggins admitted that because it was “a bit daunting to create something new every single day for 36 days,” he wanted to set additional parameters to his interpretation of the letters: “That's how I came up with the idea of trying to make [them] in the shapes of local architectural forms.”

The result is a series that captures the vernacular of Caribbean architecture, as well as its vibrant spirit and history, a process that began with observation. “I have a collection of photographs on my phone that I take when stopped at red lights, or when I go on walks,” Huggins says, “and these form the basis of where I pull certain elements from. Sometimes I may be driving or I'll be without my phone so if I see something I make a mental note of what I've seen and I use different techniques to help me remember, and once I'm at home I make a sketch of whatever it was.” 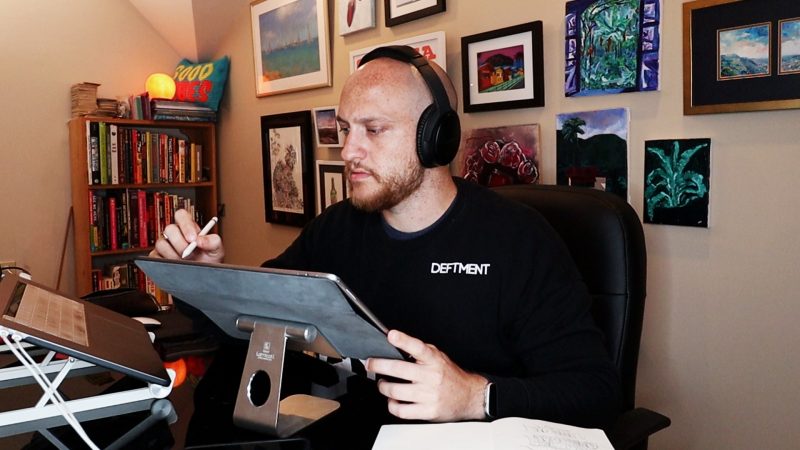 For this project, he drew all the letters in his sketchbook, and once he was satisfied, used the Procreate app to illustrate the final pieces. Stylistically, he was going for a modern aesthetic, even though some of the images pay homage to local heritage buildings, the architectural styles of which tend to lean towards Baronial, as in the case of Stollmeyer's Castle, or Indian Empire, as with the Roman Catholic Archbishop's residence.

Huggins purposefully interspersed such landmarks located around the Queen's Park Savannah, and which are part of  Trinidad's famous Magnificent Seven, with more generic buildings that speak to a regional design aesthetic. “That way,” he says, “people can imagine their own experiences and connect the illustrations to their own memories of Trinidad and Tobago and the wider Caribbean.”

While some letters organically lent themselves to being converted to an architectural shape, Huggins had to push his creative boundaries to get more difficult letters to appear credible, such as his depiction of Trinidad and Tobago's Eric Williams Financial Complex, home to the country's Central Bank and affectionately referred to as the Twin Towers, to represent the letter X.

Interestingly, the drawing can also be interpreted as a suspension bridge or even a Bailey bridge, quite common sights throughout the region.

Another challenging letter was Z. “I had no clue what to do,” Huggins explains, “until that morning I was driving and passed by a recreational ground and the shape of the pavilion stood out to me immediately as a Z … by that time in the project, every drive had me looking at buildings as potential letter forms.”

The sketch also looks very much like a detail of the Hasely Crawford Stadium in Port of Spain.

Huggins says the most difficult letter to come up with an idea for was V, although “most of those letters at the end of the alphabet all posed unique challenges.”

While Huggins’ interpretation of the staircases typically seen on the exterior of homes in central and south Trinidad, many of which are built on stilts, immediately conjures up a Caribbean aesthetic, his favourite is a toss-up among A, J, or N.

The letter A was obviously the first one Huggins did for the 36-day challenge, and he says the concept popped into his brain as “a really pure idea” that required no time trying to figure out.

J is meaningful to him because it reminds him of his neighbourhood fruit stand, and he spent a lot of time on N—maybe because it's the initial of his first name, he admits—trying to get the details to look on point, especially because the adapted Art Nouveau Boissiere House, which it represents, is considered an iconic piece of heritage architecture.

As a cohesive series, the Caribbean architectural alphabet comes across as a melding of regional architecture and language. “In my work,” Huggins explains, “I'm constantly trying to define, or to figure out a Caribbean aesthetic. I try to do it through my illustration as well as through my graphic design practice:

Caribbean architecture is something that is so unique and maybe something that is taken for granted by the average person. Even if you just look at the colours we see on a daily basis, which are all choices made by each individual homeowner, it creates a mishmash of bright colours that dot our cities and towns; and of course we are fortunate that this is against a backdrop of blues and greens.