Among thousands of participants, the police singles out 26 activists for arrest and prosecution 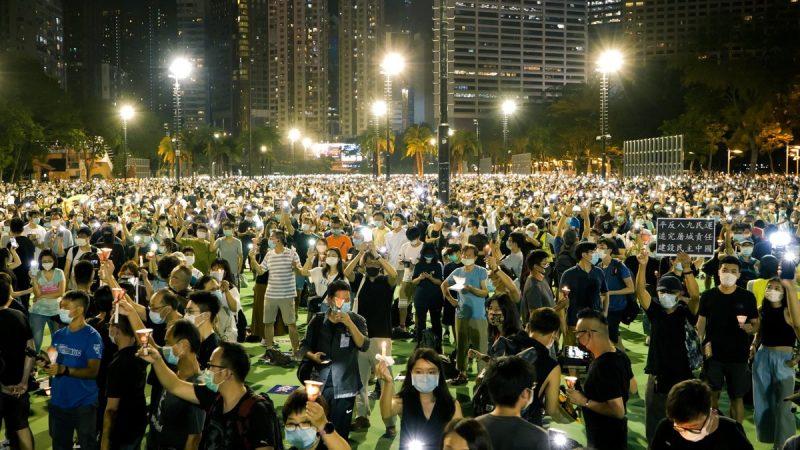 Despite a police ban, thousands of Hongkongers assembled spontaneously in Victoria Park on June 4, 2020, to commemorate the Tiananmen Square massacre. Image from the Stand News. Used with permission.

The district court magistrate Stanley Chan added an extra 10 months’ jail time to the sentence of prominent pro-democracy activist Joshua Wong, who is currently serving a 13.5-month jail term after being charged with organizing and inciting an unauthorised assembly in 2019.

The other three who received sentences are district councillors: Lester Shum was sentenced to six months in prison, while Tiffany Yuen and Jannelle Leung each received a four-month jail sentence. All three will lose their district council seats, and Wong and Shum are also facing a subversion charge under the National Security Law for participating last year in the pro-democracy primaries for the Legislative Council elections.

Hongkongers have been gathering in Victoria Park in downtown Hong Kong to commemorate the June 4 Tiananmen Massacre since 1990. The sentences handed down on May 6 mark the first time that anyone has been sentenced to prison for this act of peaceful commemoration.

Last year, the Hong Kong police refused to issue public assembly permits to the organizer of the vigil, citing pandemic concerns. As a result, anyone who attended the vigil risked being charged with participating in an unauthorized assembly.

Out of the more than 20,000 Hongkongers who lit candles in Victoria Park, the police singled out 26 activists for arrest and prosecution. Two of the activists, Nathan Law and Sunny Cheung, have left Hong Kong for exile abroad.

The magistrate said in his ruling:

With the 2019 unrest still lingering, the gathering of some 20,000 participants on a special night like June 4 meant emotions could run high, and unruly elements could take advantage of the situation and incite violence.

The jailing of Joshua Wong, Lester Shum, and two district councillors for their participation in a peaceful vigil marking the Tiananmen Square Massacre is a new low in the dismantling of the city’s freedom. It appears that it is now a crime in Hong Kong to remember the 1989 massacre, where the Chinese Communist Party killed thousands of student activists.

This year, the June 4 vigil in Victoria Park has again been effectively banned, as the Leisure and Cultural Services Department has suspended leasing of venues and facilities, citing health concerns.

While Hongkongers could still go to Victoria Park spontaneously on June 4 like they did last year, the court’s ruling signaled that this could lead to arrest and imprisonment. As @limlouisa noted:

Make no mistake: public remembering of June 4 in hk is being criminalized using the pretext of covid safety https://t.co/0XEjllk0Be

Despite the threats, HK Alliance has continued with their annual June 4 commemoration activities. On May 2, the vice-chairs of HK Alliance, Albert Ho and Chow Hang-tung—who are also facing two charges for inciting and participation in last year’s vigil— conducted the annual commemoration ritual in front of the Pillar of Shame at the Hong Kong University campus. AFP Hong Kong correspondent Xinqi Su recorded the event:

“Even if the regime wants to criminalise our candlelight (to commemorate June 4), we will persist,” said HK Alliance leader Chow Hang-tung. “We also hope everyone can remember the day, remember the massacre.” pic.twitter.com/cL1mbFVOyS

After the court's ruling, Chow stressed:

June 4 is coming again – we have been lighting candles in Victoria Park for 31 years and we will continue.