With shrinking wetlands, population of Nepal's elusive fishing cats is poised to decline

A fishing cat is indicator of a healthy wetlands ecosystem. 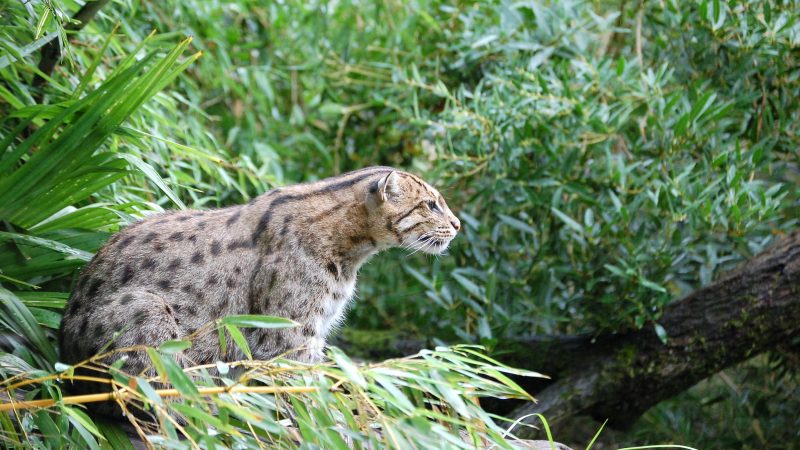 In the southern plains of Nepal, a person who is frightened of something is told ‘you’re a wet cat’. But in that region, there are cats that aren’t afraid of water. In fact, it lives near wetlands and mostly feeds on fishes, earning its name as the fishing cat. However, under threats of habitat loss and degradation, the animal’s population is declining in Nepal.

Today, experts estimate there are approximately 150-200 fishing cats in Nepal, with less than 2,500 fishing cats in the wild, distributed discontinuously in South Asia and South-East Asia, where they've been recorded in Pakistan, India, Nepal, Bangladesh, Thailand, Myanmar, Cambodia, Sri Lanka and Indonesia.

Skilful at fishing, the cat's technique is simple: it taps the water surface, and when fishes are drawn to the created ripples, it dives in to catch them. Its partially webbed feet, rudder-like tail and water-resistant coat assist it while swimming. Aside from fishing, for which it was given its name, the cat equally devours rats, reptiles, small mammals, and birds.

It's #FishingCatFebruary so let's learn a bit about the species! Fishing cats are expert hunters in aquatic habitats. Not only do they have some unique morphological features, they also have tricks up their sleeve! #fishingcats #fishingcat #fishingcatfebruary #worldfishingcatday pic.twitter.com/tEzcMsf951

First recorded in Nepal in 1836 by Brian Houghton Hodgson, the middle-sized cat that weighs around 5-16 kilos and is often confused for a leopard cat, has been classified as Vulnerable in the IUCN Red List.

“Among the 40 wild cat species in the world, the globally-vulnerable fishing cat is the only species spending most of its time in wetland habitat,” Rama Mishra, a PhD candidate at the University of Antwerp in Belgium who founded Terai Fishing Cat Project, Nepal, told Global Voices. “Unlike other cats which don’t prefer going underwater, it preys on several species of fishes and other aquatic creatures. So, we call this cat the indicator of a healthy wetlands ecosystem.”

I love big cats, but I love small cats too! Follow my friend & colleague Rama Mishra as she collects Fishing Cat scats in southwest Nepal.@iRamaMishra was the first publish a thesis on Fishing cats in Nepal & is the founder of the Terai Fishing Cat Project @fishingcatorg pic.twitter.com/EkXkDklm8D

A camera trap image of a fishing cat. Image by Department of National Parks and Wildlife Conservation (DNPWC)/ National Trust for Nature Conservation (NTNC) through Rama Mishra. Used with permission.

But threats like habitat loss and degradation have affected the fishing cat population of Nepal. Speaking to Global Voices, Bhupendra Prasad Yadav, Assistant Conservation Officer with the Nepalese Department of National Parks and Wildlife Conservation, said that “many wetland habitats are being drained and converted to agricultural land and infrastructure development in Nepal”. He added that, in some areas, pollution and excessive fishing are also damaging wetlands. “In some places, fishing cats have been killed for their pelts or for their meat,” he said.

A fishing cat lives in and around wetlands. Image by Rama Mishra. Used with permission.

Yadav, who has intensively collected fishing cat data from the camera trapping data used for a survey in Shuklaphanta National Park that monitored tigers and their preys, also said:

Unfortunately, when their usual habitat has been destroyed or has become unusable, some fishing cats have increased their predation on livestock. So, farmers have killed them to protect their animals. Wetland destruction is by far the biggest threat to the animals, however.

In addition, converting agricultural land into ponds adds to the woes of these cats. Though farmers don’t harm them while they are roaming around agricultural land looking for their prey, they assume that these cats lurk around ponds to steal fish. In retaliation, they trap and poison these cats to stop their fishing. Some have been killed in road accidents as well.

But on the other hand, Mishra noted that these cats are good friends of farmers, since they prey on rats, mice and farmland birds that harm the crops. But in order to protect these unique friends of farmers from extinction, conserving and restoring wetlands is a first and crucial step, let alone raising awareness among the communities to conserve them. “Stop taking it as a bad omen when any cat crosses your way,” Mishra said. “This will obviously control the road kills of cats.”