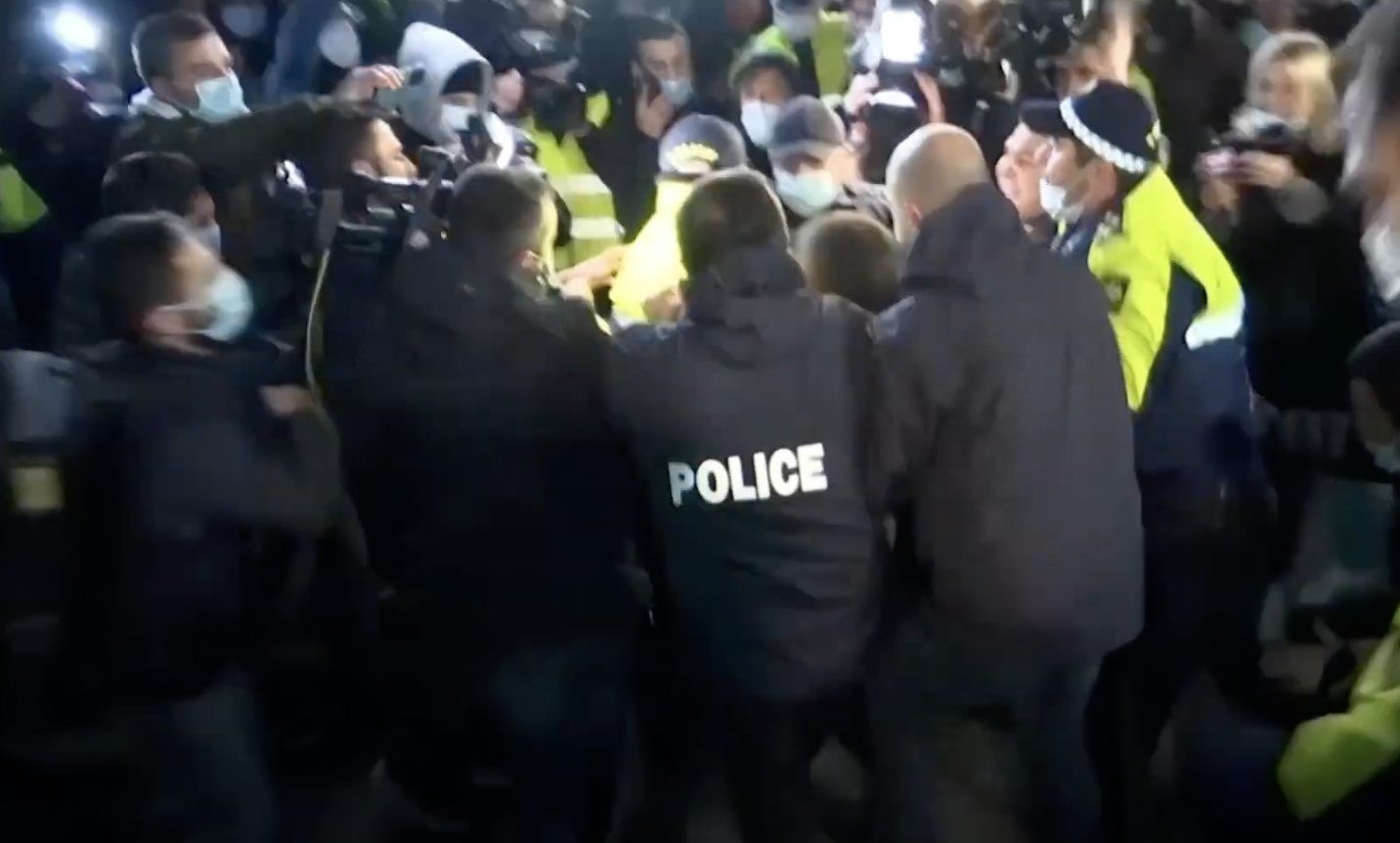 Screenshot of video by Voice of America.

This story was originally published on OC Media's website. A lightly edited version is republished here under a content-sharing agreement.

Georgian lawmakers approved last week a series of tougher penalties for administrative offenses that human rights groups say could have a chilling effect on freedom of expression and the right to peaceful assembly.

On April 29, the parliament dominated by Georgian Dream approved, in a series of expedited hearings, amendments to the Code of Administrative Offences that introduce harsher penalties for petty hooliganism (Article 166) and disobeying the police (Article 173).

The package law triples the minimum fine for repeated hooliganism to ₾1,500 (440 USD) and doubles the maximum fine to ₾2,000 (580 USD). In lieu of the fine, offenders may also be placed into administrative (pre-trial) arrest for a minimum of five days, while the maximum period is set to remain at 15 days.

Additionally, the Parliament extended the maximum period of administrative detention for any reason (Article 247) from 24 to 48 hours.

Watchdog groups, including Transparency International — Georgia, the Georgian Young Lawyers’ Association (GYLA), and the Democracy Research Institute (DRI), have expressed concern over the amendments’ negative effect on the freedom of peaceful assembly, as the legal provisions targeted by the amendments are routinely used by police to detain participants of anti-government street protests.

The US Embassy: ‘Deeply disappointed’

Critics have underlined that reviewing the draft law in an expedited fashion complicated the public oversight of the process, as well as endangered what has appeared to be a rapprochement between the ruling Georgian Dream party and the country’s opposition.

Georgia has been engulfed in a political crisis since October 2020, when opposition groups contested the results of parliamentary elections won by the ruling Georgian Dream. An agreement was reached in April after negotiations mediated by both the United States and the European Union.

The deal stipulates that early parliamentary elections be called in 2022 if Georgian Dream gets less than 43 percent in upcoming local elections. It also sets the rules for power-sharing in parliament, outlines reforms to the judicial system, and suggests reforms to the Central Election Commission.

In a statement released shortly after the amendments passed, the US Embassy in Georgia expressed their “deep disappointment” over Georgian Dream streamlining the package law in such a manner, calling it “unnecessary and unhelpful.”

“The lack of meaningful consultation with opposition parties, civil society, and other stakeholders raises questions about the purpose of the amendments,” the statement reads.

The US Embassy underlined that Georgian Dream has “fallen short” of taking more inclusive steps after the deal.

In response to such criticism, Georgian Dream MP Dimitri Samkharadze blamed the lack of debate on opposition groups disregarding the parliamentary hearings on the law.

While criticising Georgian Dream over the latest move, several activist groups, including Movement for Georgia and Shetsvale (Change!), which have frequently held anti-government protest rallies, did not spare the opposition groups in the parliament from criticism for their “astounding” silence on the matter.

On April 27, in a bid to overcome the crisis, MPs from Strategy Aghmashenebeli, Lelo, the Republican Party, Girchi — New Political Centre, and Girchi — More Freedom started participating in the parliamentary work. However, they mostly limited it to the amnesty law which is expected to free Nika Melia, chairman of the largest opposition group United National Movement, who has been in jail since February 23 with charges linked to the anti-government protests that have swept the country in the past months.