Taiwan, ‘the most dangerous place on Earth'? Not according to Taiwanese. 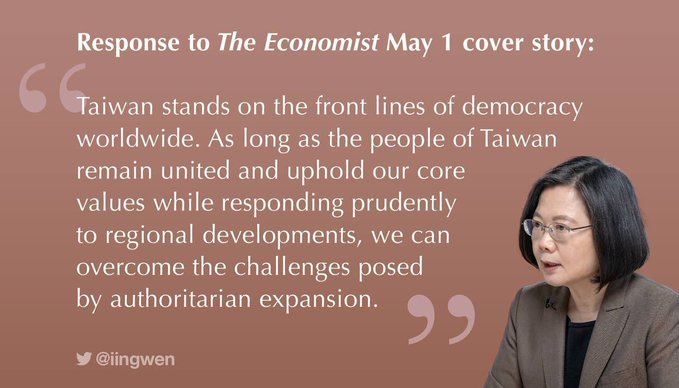 British magazine The Economist's cover story on Taiwan this week elicited strong reactions on Taiwanese Twitter, with many users showing astonishment at the headline, “Taiwan: The most dangerous place on Earth.”

The Economist's story focuses on the tensions between the United States and China and depicts the self-ruling island as an arena where these hostilities play out.

Many users criticized this choice of framing:

First, can I now put “grew up and lived in the most dangerous place on Earth for 23 years” on my CV?

Second, wow, thank you for putting Taiwan's future in the hands of US and China. That's *very* reassuring. https://t.co/4hc42GQPu7

Others sarcastically mocked it:

I totally agree with the Economist. Taiwan is the most dangerous place in the world if you’re trying to lose weight. ? pic.twitter.com/jqH2qLy9wz

Taiwanese President Tsai Ing-wen also tweeted a reaction on April 30, saying that Taiwan was “at the front lines of democracy worldwide”:

Taiwan stands on the front lines of democracy worldwide. As long as the people of Taiwan remain united and uphold our core values while responding prudently to regional developments, we can overcome the challenges posed by authoritarian expansion. I trust that our like-minded partners, having seen the risks involved, will rise to this challenge and work together to maintain peace and prosperity in the Indo-Pacific.

While the story's headline is exaggerated, the military threat is indeed real. China has claimed sovereignty over Taiwan since 1949, when the Kuomingtang lost the Chinese civil war and fled to the island. Since Tsai Ing-wen, of the pro-independence Democratic Progress Party, was elected present in 2016, China has doubled down on the nationalist rhetoric, with the slogan “unifying Taiwan by force” becoming ever more popular — and military drills across the strait ever more frequent.

The U.S. has long adopted a policy of “strategic ambiguity” on Taiwan, in which it provides political and military support to the island without openly promising it would defend it in the case of an attack by China. But in President Joe Biden's administration, American officials have been increasingly calling for an explicit pledge of Taiwan's defense.

On April 14, ahead of a visit by U.S. emissaries to Taiwan, Beijing sent 24 military aircraft, including fighters and nuclear-capable bombers, into Taiwan’s air defense zone. Beijing's Taiwan Affairs Office of the State Council stressed that the military action was to show Beijing’s determination to stop Taiwan’s independence.

Two days later, in an exclusive interview with the Associated Press, China’s Vice-Minister of Foreign Affairs Le Yucheng warned the U.S. against playing the “Taiwan card.” He also implied that China is open to resorting military force:

China firmly opposes any form of official engagement between the United States and Taiwan. Whether low-level or high-level, official engagement is what we firmly oppose. The United States should not play the “Taiwan card”. It is dangerous. The one-China principle is China's red line. […] We are prepared to do everything we can for peaceful reunification. That said, we don't pledge to give up other options. No option is excluded.

Although the threat from China is real, some found that The Economist’s story framing echoed China’s fear-mongering tactics, while also undermining Taiwan's position:

This breathless fearmongering, threat inflation, and borderline fatalism does not help Taiwan https://t.co/AcTYDCu0bk

Others urged Taiwan to develop a diplomatic framework that is able to stand up to China’s threats without relying on the United States alone.

Taiwanese citizens have widely praised its officials for their handling of the COVID-19 outbreak — there have been only been 12 deaths on the island by the disease since the start of the pandemic. Taiwan has seen a GDP growth of more than 8 percent in the first season of 2021 despite China’s economic sanctions and military drills. A large number of Hong Kong protesters have also taken refuge in Taiwan in face of Beijing’s political persecution following the 2019 anti-China extradition protests.

The most dangerous place on earth is the safest place.
#Taiwan’s status is the key to world peace
#Enclose China