'The Choice' offers an official narrative of a deeply-polarizing period 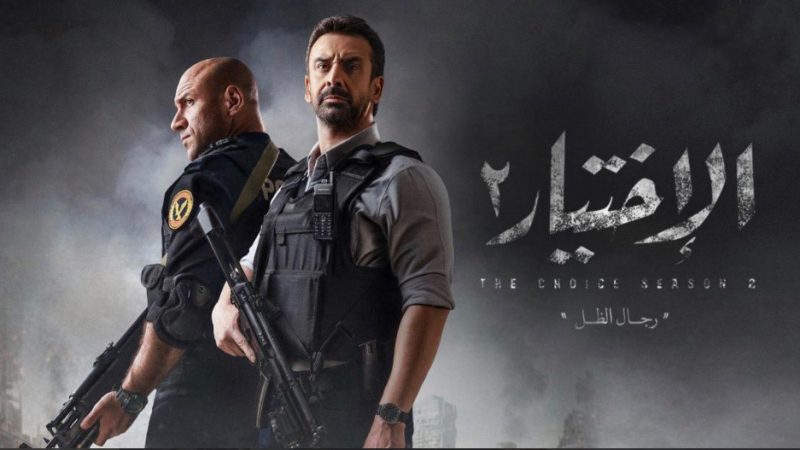 Screenshot of the poster for “The Choice 2″, an Egyptian 2021 TV production that has stirred political divisions through presenting a one-sided narrative of a polarizing period.

The first episode of the second season of “The Choice”, a popular Egyptian police series that delves into the events of the country's divisive summer of 2013, was titled “For us not to forget.” Such a reminder is hardly necessary. For the millions of Egyptians who witnessed or were impacted by the events of those heated months, the details of this period are deeply engraved in their memories.

Produced by Synergy, a studio that has been accused of monopolizing TV entertainment content through its alleged links to the Egyptian army, “The Choice” follows the stories of several police officers, both fictional and real, against the backdrop of the 2013 coup that ended the tenure of Mohamed Morsi, the country's first elected civilian president who hailed from the Muslim Brotherhood. While the first season pitted an army officer against a mastermind of Sinai Province, the local branch of the Islamic State, the second season projects police forces as heroes battling another form of ‘terrorism’ – Morsi's supporters.

The show depicts the official narrative of the events, in line with the current government's designation of the brotherhood as a terrorist group. Its second season, which began airing April 13, seems to focus and magnify the sporadic violence projected by Morsi's supporters across Egypt in defiance of the coup — while concealing the systematic brutality to which they were subjected by state security.

In doing so, the show has deepened the fault lines that have long divided the Arab world's largest population, who either recall these events with a burning sense of grief or utter jubilation.

An episode that provoked exceptional debate was the fifth, which focused on the events of August 14, 2013, when security forces violently dismantled a pro-Morsi sit-in at Cairo's Rabaa Al-Adawiya square. Attended by tens of thousands of Egyptians, the Rabaa sit-in was the largest of two in the capital, with protesters demanding the reinstatement of Morsi, who had been overthrown by the army several weeks earlier with huge popular support, and held captive in an unknown location.

The episode portrayed the security forces as adopting a very humane approach to dismantling the vigil — a narrative that many would challenge. The dispersal of the two vigils marked the bloodiest day in Egypt's recent history and a turning point in its short-lived democratic journey. The security forces’ dismantling of Rabaa's sit-in alone left at least 900 people dead, according to a 2014 investigation by Human Rights Watch, and thousands more wounded. At least 848 protesters were detained on the day and thousands in the months that followed. In its report on the 12-hour-long dispersal, Human Rights Watch said the operation “not only constituted serious violations of international human rights law, but likely amounted to crimes against humanity.”

The show seems to subscribe to a recent media trend in Egypt that glorifies police officers while casting the Muslim Brotherhood as criminals and traitors. This account, naturally, has renewed political friction that was salient on social media.

On one hand, it sings to the feelings of bliss many Egyptians feel towards the dispersal, as many rejoiced over the army ridding the country of the Islamist group's rule and its supporters. The show reminded coup supporters of the threat they felt under Morsi's reign, as it reiterated official accusations that linked the Muslim Brotherhood to a rise in militancy in the eastern province of North Sinai, while overstating its supporters’ assaults against police forces and Egypt's Copts in response to the coup. One Twitter user wrote:

The TV show “The Choice” does not just embody the victories of Egypt's men, but it also documents a period that is one of the most dangerous in Egypt's history, with real footage and scenes that happened and which we've seen and recall. It reminds us of days which we pray not to relive, in addition to other scenes written with geniality.

Another supporter of the dispersal wrote:

On the other hand, the series also provoked an opposite stream of posts, with many of those who opposed the coup and condoned the violent dispersal or were impacted by it, challenging the show's narrative, recalling their version of the story.

According to one Twitter user, who shared gruesome still shots of alleged victims of the dispersal:

The real choice was a compulsory choice of death

“The Choice” is not a work of art, but rather a crime against humanity. The question here is what if a group of neo-Nazis decided to produce a movie or television series glorifying the Holocaust massacre, would the world have allowed that? Were you going to adhere to impartiality in the name of professionalism and objectivity?

Another tweet mocked the way the show narrated the events of the day, sarcastically calling on its director, Peter Mimi, to produce a sequel on police brutality, in reference to an incident whereby a police officer allegedly gassed 37 political prisoners to death while they were trapped in the back of a van:

We want Peter Mimi to put together The Choice 3 about the death of 37 young men who suffocated themselves after orders from the brotherhood to implicate the army.

Despite repeated calls by local and international human rights groups on Egyptian authorities to hold accountable all officials responsible for the bloodshed that marred the dispersal of Rabaa, impunity has prevailed. Human rights groups have also denounced the Egyptian state's prosecution of survivors after a 2018 court ruling found 739 people guilty on charges linked to the dispersal, sentencing 75 protesters to a death sentence, and 47 to life in prison.

As the show continues during Ramadan, Islam's holy month of fasting that has been for years the peak season for television entertainment, societal divisions widen. A show timed to be broadcast as family and friends gather has once again sparked arguments and rifts that have not been forgotten, but buried in their minds.