Chen Guajiang, a delivery worker and organizer, is facing 5 years in prison for 'picking quarrels' 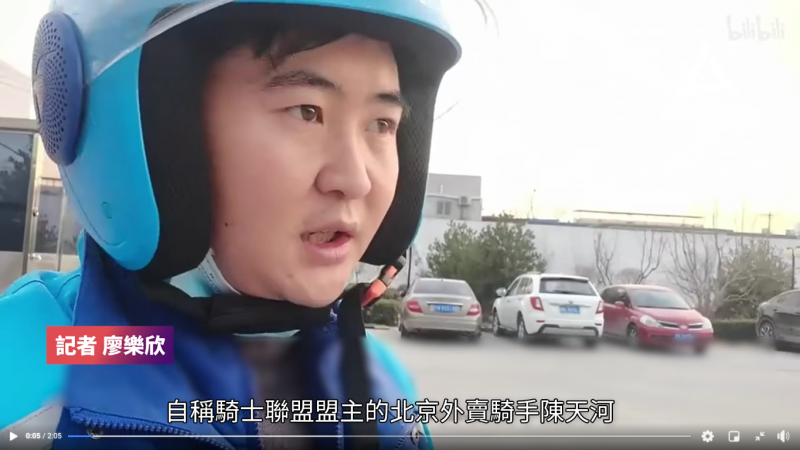 On April 27,  the deputy head of the department of labor relations in Beijing's Human Resources and Social Security Bureau, Wang Lin appeared on the city's TV channel working as a delivery driver. After a 12-hour shift, Lin only managed to earn RMB 41 dollars (less than US$ 6.5 dollars).

After his stunt on the TV program, which aims to show how Beijing officials care for its citizens, Wang said his department was in the process of negotiating with major delivery apps improvements on the working condition of riders and drivers.

Meituan, a Chinese food delivery app with 290 million active users , swiftly made a public statement as well, vowing to improve its order allocation system, set up a channel for worker complaints, and provide them with extra holidays.

With just a few days ahead of Labor Day, the video of Wang riding on a motorcycle in the streets of Beijing went viral on Chinese social media, with many users commenting on it via Weibo.

A user named “Xiao-hei-ye-zhi-jing” (小黑夜之睛), who presented himself as a delivery worker, said that drivers’ labor conditions would not change unless the authorities ensured platforms hired them as employees and offered insurance for their top-grade drivers. For the flexible workers, he says they should be able to choose their orders rather than be obligated to take them. He also suggested that government authorities enforce a minimum per-order pay rate, and obligate the platforms to adjust it according to the distance and the weight and size of the delivered items.

With the COVID-19 pandemic, delivery services have been growing exponentially around the world. This is no different in China where, in 2019, the sector employed more than 10 million delivery workers according to a recent report from China Central Television. The number has only been growing since as a delivery service platform disclosed that in just two of the months during the pandemic, around 580,000 new delivery workers had registered in its platform.

Around the world as in China, delivery drivers perform hazardous work and put in long hours. But as self-employed workers, they enjoy no employee rights, such as minimum wage, health insurance and holiday pay.

The Chinese food delivery sector has seen 45 strikes in 2019 according to a report by the labor organization China Labour Bulletin.

The Beijing reality show suggests that the Chinese government is well aware of these issues. But in the past, authorities have punished delivery workers who have attempted to speak out and protest for better conditions.

The arrest of a delivery worker activist

The detention did not stop Chen's labor activism. In December 2019, he organized a “delivery rider coalition,” which by 2021 evolved into a network of 16 WeChat groups with a total of 14,000 members.

On February 25 this year, Chen was arrested again after he exposed that a bonus system launched by platform Ele.me during  Lunar New Year was fraudulent. In a video, Chen demonstrated how the app stopped assigning orders to drivers once they were about to meet their set target.

On April 2, Chen’s family received the official notification that he would be charged with “picking quarrels and provoking troubles.” He will face up to five years of imprisonment.

In China, delivery workers struggle against a rigged system

Chen’s arrest did not stop other delivery workers from organizing strikes. During the Two-Congress sessions in March, a few small-scale strikes in reaction to e-commerce giant Meituan’s lowering of the per-order delivery fee took place in a number of Chinese cities, including Linyi, in Shandong province, Shenzhen, in Guangdong province, and Tongxiang in Zhejiang.

The tyranny of the algorithm

The exploitation of delivery workers has caught the public eye in China in September 2020, when state-affiliated magazine Renwu ran an investigative story on how Meituan's algorithm unfairly punished workers.

The investigation discovered that a delivery worker’s per-order pay is determined by a complex system that takes into account the average number of orders the worker takes per day, punctuality, customer evaluation, and customer complaints.

The minimum delivery time requirement, according to the piece, is determined based on “optimum conditions” — dry weather, little traffic, and that the restaurant finishes the preparation of the food on time. The suggested driving routes also sometimes go against traffic regulations.

It found out that when a customer files a complaint, which often happens when the order is delayed, the worker is subjected to a fine which can be worth a whole day’s income. The worst punishment is to have the account deleted by the app altogether.

Reports by the Shanghai city government show that in the first two quarters of 2019, the delivery sector was involved in 325 traffic accidents, which was more than half of the total 570 cases.

Facing public criticism, major Chinese food delivery platforms have since adjusted their algorithm to provide a few minutes of flexibility on delivery times. But they've maintained other rules, such as a monthly bonus for riders who undertake a large number of orders and the ranking of workers according to performance. They are all designed to make sure workers ensure a speedy delivery — at the expense of their own physical safety.

On January 11, a protest in response to the suicide of delivery worker Liu Jin, in Jiangsu, caught the public attention again. The 47-year-old worker attempted to take his own life after the delivery platform deducted RMB$5000 (approximately US$770) from his income. He was seriously burnt and in the hospital, he reportedly told his sister that “he was so tired he did not want to live anymore.”