The 'Covid round dance' is a form of escapism or defiance

Dance of Death by Ivan from Kastav (replica of 15th-century fresco; National Gallery of Slovenia), Public Domain photo via Wikipedia.

A crowd of people folk-dancing in celebration in a country that has had over 6,000 deaths since the breakout of the COVID-19 pandemic might seem odd, especially at a time when over 30 of their compatriots are dying every day. But that's been happening so often in Serbia, that it's even got its own name: “Kovid kolo” or the “Covid round dance.”

Тhey dance the covid round dance at the monument, again!

A key issue in Serbian society since the start of the COVID-19 pandemic has been a lack of respect for the preventive measures related to partying and clubbing, and public folk dancing as a form of escapism or defiance against the restrictions took this issue to a whole new level.

Such behavior is not without precedent. European history has recorded a range of irrational responses to epidemics that have plagued the continent in the last couple of thousand years—from repression like scapegoating  “undesirable” members of society, such as witch-hunts and anti-Semitic pogroms, to the break up of the fabric of society and the fall of empires. For instance, the Black Death pandemic (1346 to 1353) was blamed for the disintegration of the Mongol Empire that spanned from China to Central Europe, as well as weakening the medieval Balkan states to a degree that they were easy prey for the Ottomans.

As Italian writer Giovanni Boccaccio (1313–1375) witnessed in his still widely read short story collection The Decameron, people of the Italian city-state of Florence reacted to the plague in various ways. While they had no clue about the existence of bacteria and viruses, many acted on the intuition that contact with infected people or corpses spread the infection. Therefore, they instituted social distancing and quarantine, locking themselves in their homes or fleeing the city to country estates.

However, the prologue of the Decameron also tells of a very different kind of response to the epidemic:

…Others, inclining to the contrary opinion, maintained that to carouse and make merry and go about singing and frolicking and satisfy the appetite in everything possible and laugh and scoff at whatsoever befell was a very certain remedy for such an ill…

This kind of behavior might have contributed to the development of an artistic genre in which depictions of the Danse Macabre, or Dance of Death, were used as allegories on the universality of death: “No matter one's station in life, the Danse Macabre unites all.”

The depiction of the dance of death, in which kings and paupers, bishops and children, men and women are all united dancing a round dance, hand in hand with representations of Death (usually skeletons) dotted the churches across Europe during the late Middle Ages. They served as a reminder that everybody is mortal and should support the Church in preparation for the inevitable afterlife. 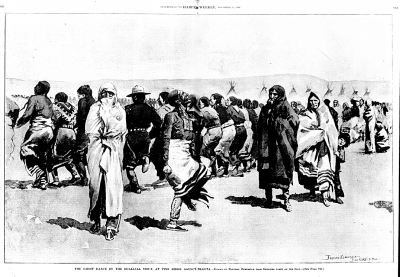 Another historical example of dancing as a “solution” to overwhelming problems is the Ghost Dance of 1890 practiced by some Native North American peoples, who were confined to reservations after the U.S.A. conquered their lands.

Ghost Dance practitioners believed that round dancing would reconnect them with their dead, bring back their former main food source, the nearly exterminated American bison, as well as make them invulnerable, and bring back freedom and peace. This new religious movement preached non-violence, but the authorities deemed it subversive and dangerous, thus the U.S. Army suppressed it through the short Ghost Dance War.

Dancing as denial of contemporary reality

Back to modern Serbia, the first instance of the modern version of “Kovid kolo” or “Covid round dance” was recorded on March 20 this year when hundreds of people gathered in central Belgrade to dance around a new monument to medieval king, Stefan Nemanja. It was announced as part of a chain of anti-lockdown protests across Europe, which included a violent demonstration in Kassel, Germany.

The monument is intended to symbolize the power of the Serbian state and traditions and was unveiled in the presence of the Serbian President Aleksandar Vučić on January 21 amid much controversy.

In a March 27 column in the daily Danas, journalist Zoran Panović noted that the police not only tolerated the folk-dancing event but also failed to identify who organized the logistics such as operating the powerful sound system.

The recording of the second instance of “Kovid kolo” features a newly minted folk song “Vakcina” a supposedly satirical skit by a musical group called Goci Bend from Foča in Bosnia and Herzegovina. The song has over six million views on YouTube and has been featured on TV shows in Serbia.

On March 30, a video of a group of young people, identified as “students,” dancing the round dance at a Belgrade underpass caused outrage by some Serbian media and on social networks, but also expressions of support from anti-vaxxers.

The daily Blic reported that while Belgrade was the hotspot of the virus infection in Serbia, “students joyfully danced the round dance in the bottleneck of an underpass which is frequented by several tens of thousands of residents of Belgrade, without masks, without distancing, singing out loud:”

Anti-vaxxing positions are strong among Serbian university students. For instance, authorities in the city of Kragujevac were alarmed that no students came to be vaccinated at the university clinic in March. On the other hand, police had to intervene on the campus of Belgrade university to break up an open-air party organized around watching a football match via video beam.

On March 26, Dr. Miroslav Todorović published a widely quoted response to these events, addressing his colleagues:

I want to express my support in your efforts to fight the coronavirus. I would sorely like to join you in that fight, but my advanced age of 87 prevents me in doing so.

I am appaled by what happenned on March 20 when under the slogan “Worldwide people's movement against COVID-19 dictatorship,” a group of citizens without protective masks gathered on Sava Square in front of the monument of Stefan Nemanja. They acted as if they didn't understand the seriousness of the epidemiological situation which places Serbia at the fifth place in the world by reason of the number of infected and deceased. And they partied with joy. They even danced a round dance around the monument to Nemanja.

None of the people present there took into consideration that their gathering created a new hotspot for the spread of coronavirus infections.

Dear colleagues, please don't allow such irresponsible and unconscientious people to shake your resolve to continue your noble and responsible jobs aimed at saving their lives. The “Covid round dance” is slap in the face of the medical profession, and it has been supported by the authorities, instead of showing support for the medical professionals.

I know full well, dear colleagues, how hard you work on your jobs. And how many sleepless days and nights have you spent by the bedsides of your patients. I know full well, because I also spent many sleepless days and nights as part of a team of physicians in charge of vaccination of people entering Belgrade, during the deadly smallpox outbreak in 1972.

You must not give up now, when you are our only hope and barrier protecting us from COVID-19.

I am proud of you, as you do honor to our profession!