Jamaican women are not reassured by official response to the incident 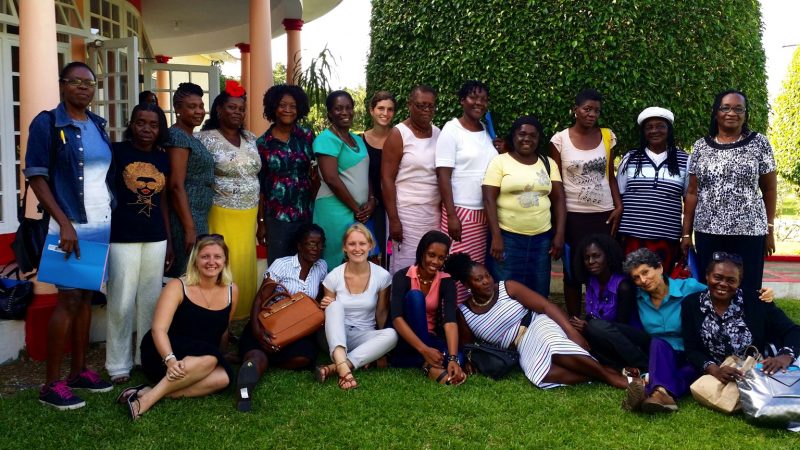 Group photo of the participants at a women's rights workshop in Portland, Jamaica, 2016. The car park incident is yet another example of violence against women on the island. Photo by Emma Lewis, used with permission.

In light of concerns and public debate over a recent rash of femicides in Jamaica, a viral video of a violent incident in a parking lot has added fuel to the fire, especially as the man seen repeatedly striking a woman—with his fists and a stool—is believed to be Member of Parliament George Wright, a member of the ruling Jamaica Labour Party (JLP) and a first-time MP in the rural constituency of Central Westmoreland.

Both Wright and the woman, Tannisha Singh, filed complaints with the police after the incident, which took place in the western-lying constituency on April 6. Wright subsequently became elusive; the police said they were looking for him to question him, since the security camera footage appeared contradictory to his report. Wright was eventually interviewed, but after both sides agreed not to press charges, the police announced that the case was “closed.”

The JLP met with Wright on April 15, after which it announced that in light of the party's “deep concern” about the “unresolved allegations,” he would be withdrawn from the government's parliamentary caucus and that the party would meet “to determine next steps”. Wright, the statement continued, “had not shared any information regarding the video circulating in the public domain but had acknowledged that allegations made against him were of a serious nature.”

Despite this, Wright has not conceded that he is the man in the video, and neither he nor Singh has made any public comment.

Since then, four advocacy groups—the corruption watchdog Jamaica Accountability Meter Portal (JAMP), National Integrity Action, and the human rights groups Jamaicans for Justice and Stand Up For Jamaica—have called for Wright's resignation, noting that even though “the CCTV footage of the altercation […] rendered both parties unidentifiable,” their position stood “on the strength of official statements made by the Jamaica Constabulary Force (JCF) and the Jamaica Labour Party (JLP).”

After meeting with Senate leaders on the matter, the recently elected chief of the Accompong Maroons also spoke out against domestic violence. Just as significantly, the influential Private Sector Organization of Jamaica (PSOJ) issued a statement on April 16, urging a thorough, transparent investigation into the matter and stressing that it could not “be allowed to be swept under the carpet.”

By April 19, Wright was put on a leave of absence and had been relieved of all party duties, though a Jamaica Gleaner editorial questioned on what basis:

The Speaker of the House, Marisa Dalrymple-Philibert, and the Jamaica Labour Party owe Jamaicans something more, and better, than their rude and cynical contortions in the George Wright affair. While what has been done may be nominally on the right side of the law, it hardly accords with accountability and transparency.

Anger and cynicism have characterised online discussion about the incident, which fed into the bigger issue of gender-based violence.

Meanwhile, a suggestion by Wright’s lawyer that public commentary on the matter might be considered defamatory was largely dismissed by Jamaican netizens:

We not going to fade away quietly into the night… Hush. Go grab the stool that was used to beat the woman and take several seats. https://t.co/eImpyp5lbr

Symptom of a bigger issue

The JAMP stated that legislation on the recall of parliamentarians should be the logical next step. Although impeachment legislation had been introduced in parliament in 2011 under former prime minister, Bruce Golding, it fell by the wayside—despite a 2016 election campaign promise by the current PM, Andrew Holness, to revisit it.

Speaking in parliament on April 20, Prime Minister Holness declared himself “outraged,” and expressed concern that the incident could undermine the government's credibility in its stance against gender-based violence:

Like all well-thinking Jamaicans who saw the viral video being circulated, I was outraged at the display of violence. Subsequent allegations that a person captured in the video is a Member of Parliament placed a new disturbing dimension to the issue. pic.twitter.com/J7Ek1HlF6f

Executive Director at JAMP shares what she believes should be the next step in handling the situation with George Wright. #TVJALLAngles pic.twitter.com/0AIWHXCldA

In the absence of existing legislative mechanisms for removal, many agreed that Wright should resign:

George Wright MP cannot be fired by the PM. Elected to Parliament by voters of Westmoreland Central, and Jamaica’s Constitution doesn’t provide for them to dismiss him before an election. He has to go if convicted of a serious offense, but that seems unlikely. He needs to resign.

The Jamaica Labour Party Women’s Caucus firmly and absolutely condemns Domestic Violence in all its forms and regardless of its perpetrators.

The Caucus reaffirms its commitment to bringing an end to Gender-Based Violence. pic.twitter.com/ePCPZVNvz6

The issue continues to rankle both Houses of Parliament. A week after denying a censure motion which the opposition party attempted to present in the Lower House, Speaker Marissa Dalrymple-Philibert relented—but at least one Jamaican woman was not impressed:

She is a poor representative to the women of this country. So much for the party with the MOST WOMEN in parliament. They all turned a blind eye to the brutality of another woman by their own colleagues. (PARTY OVER MORALS). pic.twitter.com/roE9gGBVxw

The matter will be debated in parliament at a later date.

Further complicating matters was a Twitter thread in response to member of parliament (and wife of the prime minister) Juliet Holness’ comment that violence should not be seen “in a partisan or a gender specific way.” This did not hit the right note for many Jamaicans, causing her to partly delete and rewrite aspects of her tweet—which also did not go down well:

MP Holness: if you really want to develop an informed perspective on the histories of violence in Ja, there are established & reputable Ja scholars who can help you to understand how/why violence is classed, raced & gendered. Perhaps invite them to help you think thru the issues.

For some Jamaicans, however, Holness’s “All Violence Matters” approach resonated. One Letter to the Editor blamed women for the poor parenting of boys, and others questioned whether women were, indeed, the primary victims of violence in the country.

During a heated parliamentary discussion on April 23, opposition senators accused the JLP's women's caucus of skirting the issue.

For its part, the Jamaica Constabulary Force has announced that it will be opening six more Domestic Violence Intervention Centres this year; there are currently only four. However, with the criminal case closed without charges being pressed, it remains to be seen whether the incident—and the issue of gender-based violence in general—will become a nine-day wonder in Jamaica.

Discomfort lingers over Wright's silence and the perceived lack of transparency:

If George Wright did not mercilessly beat a woman and “claat” her with a stool, why doesn’t he publicly state that he did not do it?