As legislative elections draw to a close, will the Congress Party reclaim Assam state from the BJP?

Results will be called on May 2 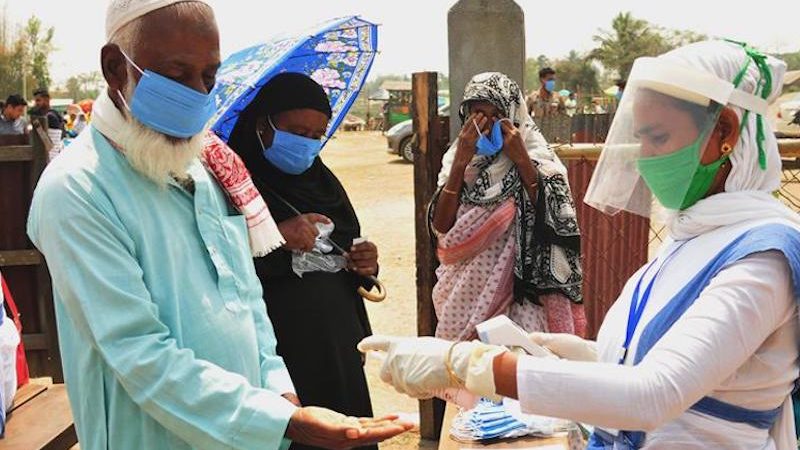 A volunteer conducting thermal screening of the voters at a polling booth during the first phase of the Assam elections at Kaliabhomora, Tezpur district, on March 27, 2021. Image by Election Commission of India via Wikimedia. Government Open Data License – India (GODL).

The recently concluded state legislative elections in India's Assam state were one of the most contested in decades, with exit polls unable to predict a likely winner before they are officially called on May 2.

This year's vote, which took place in three phases starting on March 27, was marked by deep polarization along religious lines, with hashtags such as #AssamUnderMughalsAttack, in reference to the Muslim rulers of medieval India, fueling online misinformation.

The INC led the election's liberal front with the largest coalition, which included the All India United Democratic Front, the Bodoland People's Front, the Rashtriya Janata Dal, and India's three communist parties. A major feat of the “Grand Alliance,” as it's called, was uniting the Muslim vote, which in the past has split between the INC and All India United Democratic Front. Over 30 percent of Assam's population is Muslim.

Two new regional parties contested the elections, the Assam Jatiya Parishad and the Raijor Dol, both inspired by Assamese nationalism and a liberal or secular view. The former had active support from the All Assam Students Union, which is the most influential student organization of the state, while the latter was backed by peasant and indigenous organizations. The two parties are running as a coalition.

Besides promising to create 500,000 government jobs, the INC's main pledge is to create a state law “to nullify” the Citizenship Amendment Act (CAA), a controversial 2019 Indian law that bans Muslims but allows Hindus, Sikhs, Buddhists, Jains, Parsis or Christians in neighbouring countries to seek Indian citizenship.

The 2019 update of the National Register of Citizens (NRC), a national database with names and relevant information of all Indian citizens can leave 1.9 million Assamese stateless. In order to be included in the NRC, citizens must prove that they or their ancestors were born in India before 1971, but many don't have such documentation. If CAA comes into play, then a large portion of these stateless people who are non-Muslims technically can get Indian citizenship and many Assamese are opposing that.

Assam has a large Bengali population, who are mostly Muslim and are commonly mislabelled as Bangladeshi migrants.

The Assam Jatiya Parishad and the Raijor Dol also played on anti-CAA sentiment while condemning the BJP for fueling division.

Meanwhile, the BJP alleges the INC is trying to “destroy Assam” by allying with Muslim leader Maulana Badruddin Ajmal, of the All India United Democratic Front.

A viral video depicted the statement of senior BJP leader and influential state minister in Assam Himanta Biswa Sharma that the elections would be a “war of civilizations,” presumably meaning Hindus and Muslims.

The BJP also promised to cancel 1.6 billion USD of debt owed by millions of Assamese women to microfinance institutions. The ruling party also showcased the infrastructure projects it launched during its tenure of Assam's legislature.

With only a few days left for the counting of polls, hopes are high for both the major alliances for a victory.