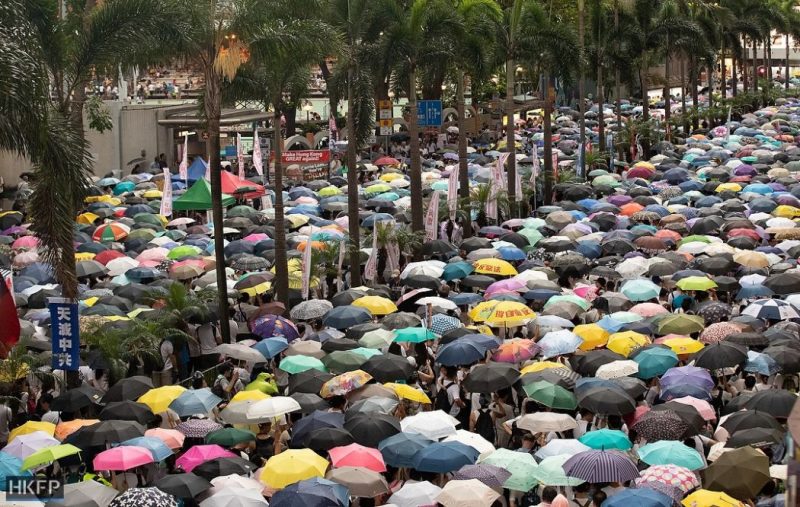 The following post was written by Kelly Ho and published by Hong Kong Free Press on April 27, 2021. This version is published on Global Voices via a content partnership agreement.

A Hong Kong civil rights coalition that organised numerous demonstrations during the 2019 mass protests is facing a probe by the city’s police force into allegations that the group breached the Societies Ordinance, a local law relating to the registration of societies.

Investigators from the force have requested that the Civil Human Rights Front (CHRF) hand in six items related to its operations, according to its convenor Figo Chan, who received a letter containing the request when he reported back to the police on Monday in connection with protest-related charges for which he is currently on bail.

According to a letter dated on April 21, 2021, the police said the CHRF registered as a society in July 2006 under the Societies Ordinance but cancelled its registration around two months later. The force said that based on information gathered from the media and social media platforms, the CHRF continued to operate as a society afterwards, which allegedly breached section five of the legislation.

The police asked the CHRF to explain why it did not reapply for registration and whether the Facebook page “Civil Human Rights Front” was established and managed by the group. The force also asked the group to provide a list of all the public demonstration and rallies it had held since September 2006 and information on its sources of income and expenditure, as well as the bank account the organisation used to receive funding.

The CHRF organised numerous public processions with police approval during the 2019 anti-extradition bill movement, including the historic “two million” march on June 16 that year. But the group later faced difficulty in getting police permission to hold demonstrations, as the months-long period of unrest often descended into violent clashes between police and pro-democracy protesters.

The last police-approved demonstration organised by the CHRF was the 2020 New Year’s march, which the group estimated had a turnout of 1.03 million.

In the letter Chan received, police cited a petition to the United Nations High Commissioner for Human Rights co-signed by the CHRF and 25 other rights groups last December. Police asked what the group’s intention was in signing the petition, which was in protest against what the signatories saw as the excessive use of force on demonstrators and people in custody.

The CHRF was ordered to respond to police requests on or before May 5. Chan told reporters the group would seek legal advice and had no further comment.

On Twitter, many see the police's allegations as a sign of a further crackdown on civic groups. @webbhk highlighted the absurdity of the police's request:

So, after ~14 years of issuing Letters Of No Objection to @chrf_hk and policing their peaceful 1-July etc marches, the Police, who also run the Register of Societies, suspect that this was all along an unregistered (illegal) society… https://t.co/mcAx8M33jj

Overseas Hong Kong activist group @HKGlobalConnect anticipated that the police could use the National Security Law to crack down on the civic coalition:

The request for @chrf_hk’s funding details and an explanation on its UN petition might suggest that the gov is looking to prohibit CHRF’s operation on natsec grounds (how the HK National Party was banned in 2018), or on the ground that CHRF is connected to foreign political orgs. https://t.co/r6DcpbsFpD pic.twitter.com/pjfPMMdnre

On Tuesday, April 26, Chief Executive Carrie Lam refused to comment on the police's request for the CHRF’s records. Lam referred to a blog post published by the justice minister on Monday, which stated that freedom of expression, peaceful assembly, procession and demonstration are guaranteed under the Basic Law.

But these rights are “not absolute” and are “subject to restrictions,” Lam said, adding such restrictions were in place to safeguard the rights of others and protect the public order and stability of the city.

“I’m sure the police force took actions in accordance with the law. But as I said, I won’t comment on cases of individual law enforcement departments,” she said.

Last month, the CHRF came under fire from pro-Beijing and state media, which criticised its role in organising street protests, saying it had “pav[ed] the way for black-clad rioters and separatists to stage rallies and demonstrations.” They also alleged—without proof—that the CHRF had received foreign funding, an accusation the organisation denies.