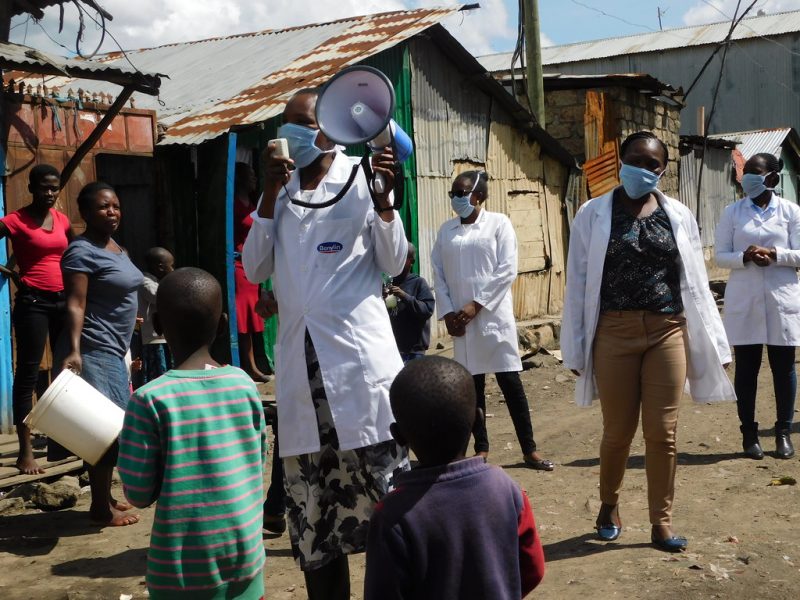 “Information and awareness is important to prevent the spread of COVID-19. Here in Kenya, clinical health care workers are sensitising the community on COVID-19. Photo: Victoria Nthenge” by Trocaire is licensed under CC BY 2.0

Kenya’s COVID-19 vaccination rollout has been mired by allegations of bribery, line cutting and corruption that have left poor and elderly citizens waiting in long queues outside public hospitals even as the country grapples with a third wave of infections and deaths.

Meanwhile, hundreds of well-connected Kenyans are paying anything up to $100 to secretly receive early inoculations, as documented through eyewitness accounts by various Kenyans online and news coverage in Kenyan and international media.

In early March, Kenya procured over 1 million doses of Oxford-AstraZeneca vaccine doses through the COVID-19 Vaccines Global Access initiative, a World Health Organization-backed global vaccine distribution effort known as COVAX. The delivery marked the start of a campaign to offer the vaccine free of charge at select public and private hospitals.

The rollout was broken down into three phases: healthcare workers and security and immigration officials, citizens over age 58 and adults with certain medical conditions, and other citizens in vulnerable conditions such as those living in informal settlements. The country is set to receive 24 million doses through COVAX. It plans to vaccinate 50 percent of the population by June 2022 through a combination of COVAX vaccines and donations from other countries, reports The Washington Post.

In a press release, UNICEF Representative to Kenya Maniza Zaman celebrated the arrival of the first vaccines in Kenya. “With the arrival of these vaccines, UNICEF and partners are honouring the promise of the COVAX facility to ensure people from less wealthy countries are not left behind in the global rollout of life-saving vaccines,” she said.

However, this elaborately planned three-phase rollout fell apart as soon as the exercise began because of a last-minute government decision to fast-track phase two in response to the third wave, conflicting politically charged interests, and the state’s failure to consult and inform citizens.

In his article questioning what is going on with Kenya’s COVID-19 vaccine drive, Patrick Gathara, a Nairobi-based writer and award-winning political cartoonist noted:

Politicians loudly and self-servingly argued that they should be given priority to inspire confidence among the population, even though the Ministry of Health was reporting encountering little resistance. Because the state had ignored the need to explain its plan to the population, there was widespread confusion about where and when people were expected to be in line.

Despite government directives prioritizing citizens over the age of 58, Kenyan media reported that businessmen and politicians not in this age group have found a way to get the jab early, exposing the country's rich-poor divide.

Meanwhile, eligible senior citizens and poor Kenyans, who aren't well connected and don't have money to pay a bribe, often wait in line all day starting at 5 a.m., only to be asked to return the following day because the doses are finished, according to The Washington Post.

“They have another door for their friends,” Mary Njoroge, 58, one of the teachers, told The Washington Post. “Without a godfather to help you through this process, what are you supposed to do?”

A similar incident in another government hospital was reported by @_Sativa, a Twitter user based in Nairobi, Kenyan. In a Twitter thread, he recounted the experience of his aunt, a retired teacher in her 60s. While elderly people waited in line, a nurse called out names and young people came to the front to get vaccinated. When his aunt asked what was happening, the nurse gave her a number where she could send money, he said in his Twitter thread.

Following reports of increased enthusiasm from the public for the vaccination campaign, Kenya’s Cabinet Secretary for Health, Mutahi Kagwe told the media:

The National Nurses Association of Kenya president Alfred Obengo pleaded with Kenyans who are not on the priority list to avoid queuing for the vaccine.

In providing clarity on how the Kenyan government could have avoided this confusion in its rollout plan, Gathara concludes his article by saying:

Much of this could have been avoided if the Kenyan government and its global partners, including the World Health Organization and Western governments, treated Kenyans as partners in the rollout rather than colonial subjects to be brutalised and exploited. Sadly for Kenyans, their colonial state does not know how to act any differently.