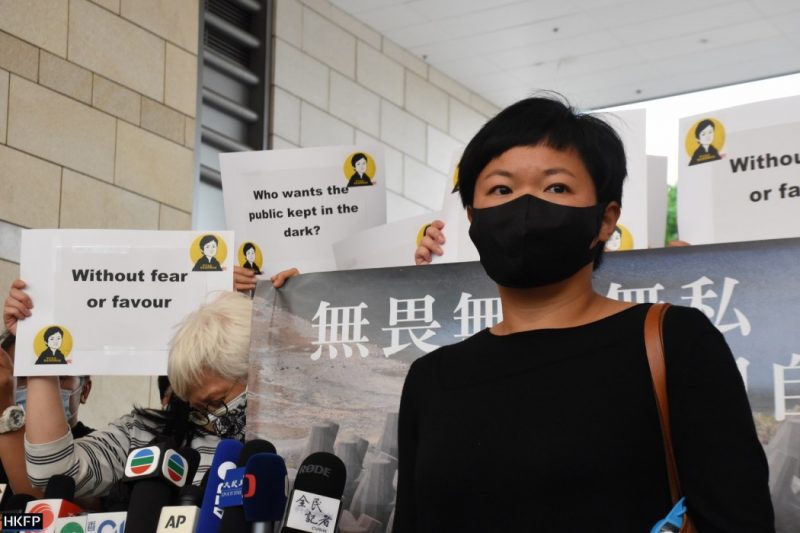 Documentary producer Bao Choy at the West Kowloon Law Courts Building on April 22, 2021, where she was found guilty of “making false statements” to obtain public records during an investigation. Photo: Candice Chau/HKFP. Used with permission.

A Hong Kong court found Bao Choy, a former producer at Hong Kong's public broadcaster Radio Television Hong Kong (RTHK), guilty of violating the city's Road and Traffic Ordinance by “making false statements” while searching public records of license plates. She was sentenced to pay a fine of HK$6,000 (around 773 USD) on April 22.

Bao's verdict is related to her reporting on the July 2019 Yuen Long subway incident, in which a mob armed with rods and wooden sticks violently attacked subway passengers, among whom were anti-extradition protesters returning from downtown protests. The result of the reporting was an acclaimed documentary about the attack aired by RTHK.

Choy was fined HK$6,000 for checking two car plates – each could have brought her up to six month imprisonment.

Choy and her team reviewed surveillance footage from the area to track down two cars that carried the assailants to the subway station. After identifying the vehicles’ license plates, the reporters used the website of Hong Kong's transportation department to find the owners.

The website system requires users to state the purpose of the inquiry by selecting one of three pre-determined options: “legal matters,” “vehicle purchase” or “transport or traffic-related matters.” As the system does not offer the option “journalistic investigation,” Bao chose “transport or traffic-related matters.” Obtaining license records that way is considered a common practice among journalists in Hong Kong.

Disregarding the public interest of the investigation, the judge found Choy guilty of “making false statements,” highlighting the fact that she knew that the records would be used for news reporting rather than “other purposes.”

The case illustrates how Hong Kong authorities is retrieving to existing laws to prosecute the press. For some journalists, the judge's interpretation of the law indicates that while car buyers, victims of car accidents, or those affected by traffic-related matters, such as road blocking, are legally allowed to access the online database, but not reporters.

Alex Lam, a reporter with the newspaper Apple Daily, highlighted the irony that Choy was the first person convicted of a crime related to the Yuen Long incident:

After all the terror that shook Yuen Long that night, @Baochoy, the journalist who relentlessly looked for the truth behind, is the 1st person to be convicted of a crime related to #721YuenLongAttack. Think about that. pic.twitter.com/YIkrux6EBe

Bao Choy said of the verdict:

@Baochoy described today's verdict as upsetting and heart-breaking. The judgement does not affect just herself, she said, but the industry, and all reporters in HK. She personally does not agree with the verdict. #721YuenLongAttack pic.twitter.com/QbLj3ivN0F

The government’s actions against Choy set a dangerous precedent. They open the door to further legal action against journalists for engaging in routine reporting. #HongKong #PressFreedom #JournalismIsNotACrime https://t.co/Xwz9TFtNFH

The latest World Press Freedom Index released by Reporters Without Borders ranked Hong Kong 80th out of the 180 countries and territories. The international press freedom watchdog said the national security law allows Beijing to intervene directly to punish what it regards as “crimes against the state,” and that is especially dangerous for journalists.

We are appalled by remarks made by Reporters Without Borders that seemed to suggest that people with a particular profession should be immune to legal sanctions… Criminals who break the law must face justice. Arrest and prosecution actions were based on facts and evidence and strictly according to the laws in force, regardless of the profession or stance of the suspects.

Bao Choy vowed to “not give up” her journalism career:

.@Baochoy: “Tho I have lost my role at RTHK, I will try hard to reach my potential in other platforms. I will not give up my journalistic work. Investigating the Yuen Long attacks for HK Connection was my pride and honor.” https://t.co/SGXAfL5IEg @austinramzy pic.twitter.com/PfWhMVRVta