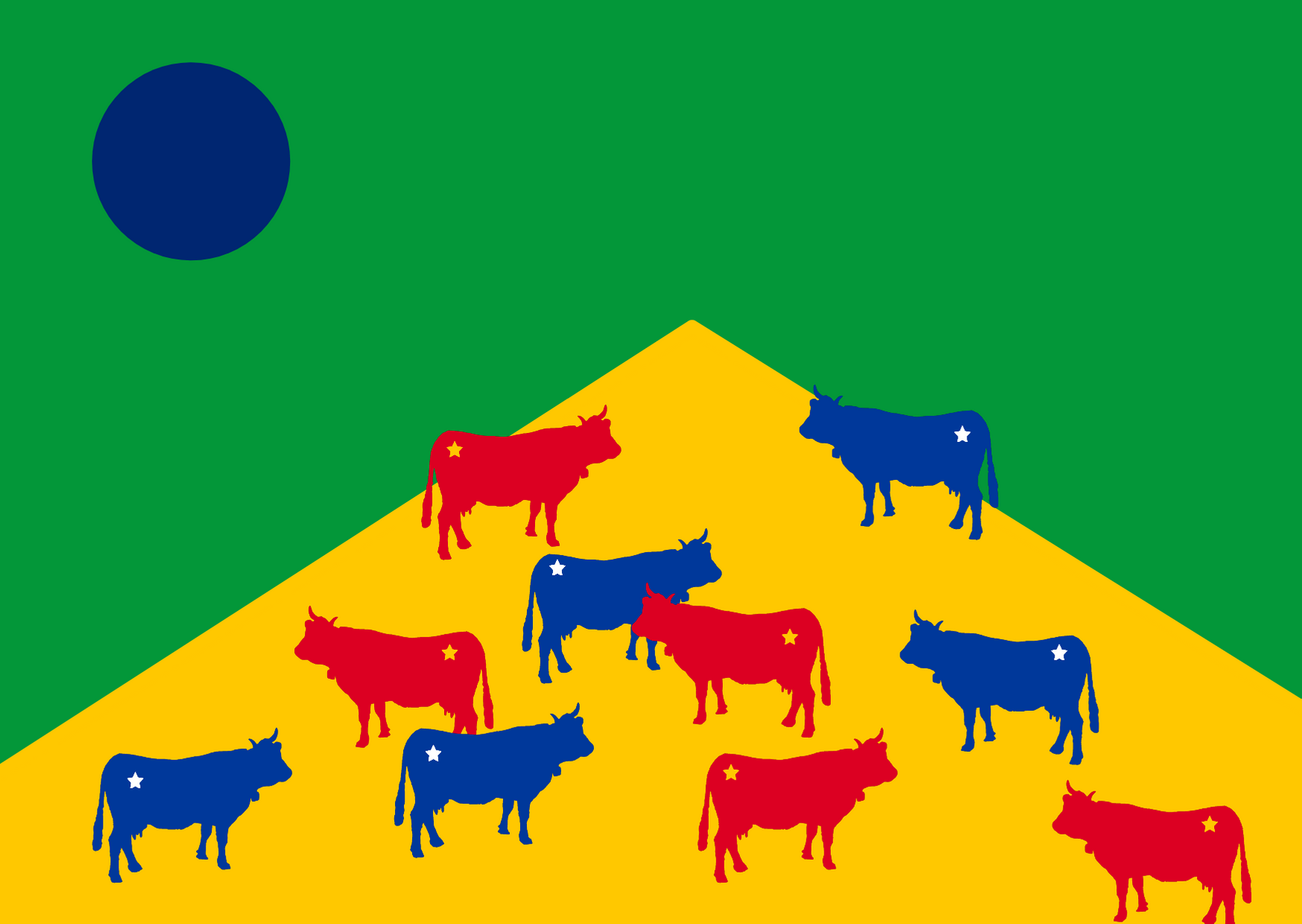 Chinese consumption of Brazilian agricultural products grew sharply in 2020, reigniting debate about the environmental impact of goods produced for the Chinese market, who is to blame, and who benefits.

China has become the biggest buyer of Brazilian products in the last decade. This growth in exports has been accompanied by Brazilian nationalist rhetoric that accuses China of “buying” Brazil and destroying its ecosystem. And yet, Brazilian state ministries are in charge of land use and protection. Critics say that the Brazilian government blames China for destroying Brazil's environment in a nod to populist politics, even as the Brazilian agricultural sector profits handsomely from Chinese trade.

The Guardian reports a 76 percent rise in beef exports from Brazil to China in 2020 relative to the previous year. Brazilian beef accounted for 43 percent of all meat imported by Chinese consumers last year.

With increased exports, demand for land for crops and cattle has increased as well, particularly in areas in the Amazon and Cerrado regions, which together account for roughly 70 percent of the beef exported to China, igniting a new cycle of deforestation and environmental degradation.

However, China's consumption of Brazil's natural resources is not the central issue, according to Evandro Menezes de Carvalho, an expert in Chinese law and international trade from Fundação Getúlio Vargas.

Carvalho points out that all exports depend on the control of federal agencies, such as the Brazilian Trade and Investment Promotion Agency, and are regulated by Brazilian law, which specifically states which areas are protected.

Rising deforestation in Brazil, he says, is primarily the responsibility of the Brazilian government, not foreign countries. “The problem is not China. The problem is Brazil's current development model that turns it into a large farm,” he told Global Voices in a phone interview.

Since 2019, when Jair Bolsonaro assumed the presidency of Brazil, there has been a gradual growth in the devastation of the Amazon. The annual deforestation rate in 2020 was 11,088 square kilometers, more than three times the size of Central Park in New York, according to Brazil's National Institute for Space Research (Inpe). This rate has increased more than 70 percent compared to the previous ten years, on average.

Brazil needs to invest more in technology and in sustainable forms of production, such as family agriculture, according to Carvalho. “But, externally, China also has a role to play,” he said. As a consumer, China could be more stringent about ensuring that Brazil follows international resolutions and treaties, such as the Paris Agreement, to which the two countries are signatories.

On March 31, 2021, the Brazilian Institute of Applied Economic Research (Ipea) released a study examining Brazil's position as one of the world's biggest suppliers of agricultural commodities.

The devaluation of the Brazilian real against the US dollar and the trade war between the United States and China contributed to Brazil's leadership of the sector.

The study also shows that China received 33.7 percent of Brazil's total agricultural exports in 2020. China is the world's largest consumer of soy, also a key export from Brazil.

As Ipea points out, China's role as the main importer of Brazilian products goes beyond the trade war with the United States. Chinese demand for many Brazilian commodities exceeds supply, to the benefit of Brazil's agricultural companies. This demand also stresses the country's natural resources, as Brazil's drive for an expanded market fuels deforestation.

On social media, the narrative that China is “taking over” Brazil's natural resources has reverberated since at least 2020, as documented by Global Voices through the Civic Media Observatory.

Every day there is an animal (slang for stupid person) on the bus saying that China will dominate Brazil, that the vaccine is killing people, that the virus does not exist… and they end by saying: “I just received it through Whatsapp”. ??

Both countries are members of the five-country economic bloc known as BRIC, and their economies are deeply intertwined. They should not waste time blaming each other, said Brazilian economist Roberto Dumas, an expert in the Chinese economy, in a call with Global Voices. For Dumas, doing so only delays what can solve the problem: a more fully evolved partnership between China and Brazil that can address environmental as well as economic needs.

“Brazil is not an industrial power, in this sense. It needs China as China needs Brazil to feed its population,” he said. “For this to happen in a sustainable way, both for the environment and for the future of foreign relations, Brazilian diplomacy needs to abandon ideas that have no basis in facts.”

The economist points towards two specific narratives that are being shared by government officials from Bolsonaro's administration, and are rapidly spreading on social media.

The first began in October 2018. Bolsonaro, still a congressman running for president at that time, made headlines worldwide by saying: “China does not buy in Brazil. China is buying Brazil.”

The second happened five months later, with Bolsonaro as president. In a master class with trainees for the Foreign Ministry, when Ernesto Araújo, chancellor at that time and a Bolsonaro ally, told diplomats that Brazil would not “sell its soul” to “export iron ore and soybeans” specifically to the Chinese communist party. Araújo left the government at the end of March.

For Dumas, these ideas took root in the collective imagination of Brazilians. The idea of opposing a country that wants to steal Brazilian natural resources has now embedded within a growing sentiment of nationalism.

“These are false ideas that only block what could be a much broader and more autonomous relationship for Brazil,” he said.

Why do government officials promote this narrative? Carvalho explains that the Bolsonaro administration began its presidency embracing a narrative charged with many stereotypes towards Asia to hide a crisis in Brazil's own democracy. The country emerged from a dictatorship, of which the current president is a well-known defender, only 36 years ago.

Brazil's economy depends so much on commodities that it has become dependent on the biggest buyers, explained Menezes de Carvalho. In 2020, China spent $67 billion USD on Brazilian exports, three times more than Brazil's second-biggest trade partner, the United States, which spent $21 billion.

In 2020, Brazil earned more than $29 billion USD from the sale of soybeans to China, the equivalent to 60.601 million tons of the grain.

Soy has become the world's most sought-after and perhaps most divisive commodity crop because of its use in fodder to feed livestock. According to the monitoring group Transparency for Sustainable Economies (Trase), China's imports of Brazilian soy were related to 223,000 hectares of deforestation between 2013 and 2017.

The former vice president of the China Soy Industry Association, Liu Denggao, reflects in an article published by China Dialogue that the global soy industry needs to change dramatically to be sustainable.

“Protecting the rainforests and biodiversity, and combating climate change, are crucial for humanity’s future. We need to start working together today. No individuals, no companies, no countries can be left behind,” he writes.

Both Dumas and Carvalho also agree that the path forward should include combined efforts in future negotiations, especially in a post-pandemic future.

For Dumas, environmental goals can only be met “with the prevalence of strong laws that hold actors accountable for an unsustainable growth.”

Nevertheless, both experts agree that with growing deforestation and hostility between Brazil and China, Bolsonaro's administration seems to be an obstacle in the way of such a strategy.