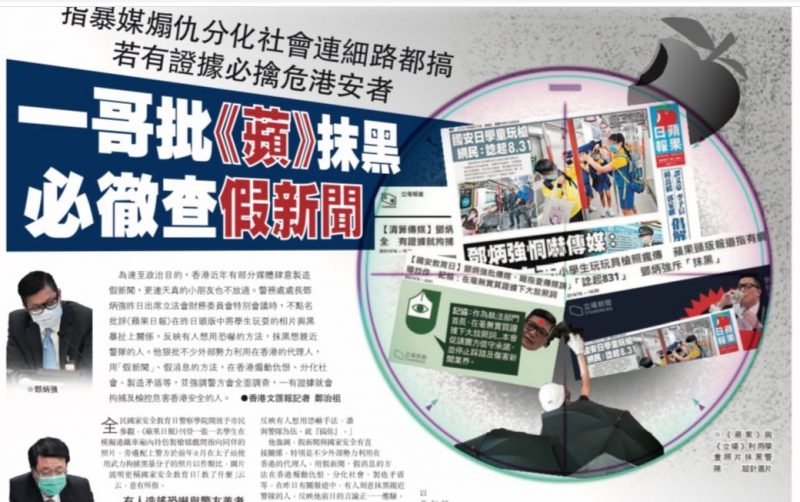 Hong Kong's independent media are anticipating a sweeping purge of the critical press in the coming weeks — if recent words voiced by Police Chief Chris Tang, which were widely endorsed by the city's pro-Beijing newspapers, are any indication.

In a public speech delivered on the occasion “national security education day” on April 15, Tang accused a few media outlets of “disseminating fake news” that “serves the interests of foreign forces.”

Tang's views have since been echoed in editorials of pro-Beijing newspapers, which have then taken the opportunity to explicitly demand authorities to “get rid of” pro-democracy newspaper Apple Daily.

These events took place just as Jimmy Lai, the founder of Apple Daily's parent company Next Digital, was sentenced to one year and two months in prison on April 16. He was found guilty of “organizing” and “participating in” two unauthorized protests, respectively on August 18 and 31, 2019.

The 73-year-old media tycoon is also facing five other charges, including “colluding with foreign powers,” under the Beijing-imposed national security law. The maximum penalty for that charge is life in prison.

While it is an open secret that Beijing has staged a crackdown on the Hong Kong press that began with Lai's arrest in August 2020, the suggestion that critical news reports could be viewed as threats to national security is more than chilling.

In his speech, Tang categorically said that foreign powers have used Hong Kong's media to disseminate disinformation and incite violence:

Agents of foreign forces disseminate fake news and disinformation to drive a wedge in the community, cause division in society and to incite violence[…] I am not making allegations. I am talking about facts. The United States is one of the countries that tries to cause security threats in Hong Kong and China. […] This is not something really secret.

These foreign forces will identify some sectors or media in Hong Kong that would serve their political objectives, with a goal to influence and plant in Hongkongers thoughts that may endanger China […]

On April 16, Tang further elaborated on his views during a meeting at the Legislative Council. He condemned “a newspaper” for publishing side-by-side photos comparing a school kid holding a toy gun in a police facility during the national security education day with a viral image of anti-riot police firing pepper spray at protesters.

Tang was referring to Apple Daily’s front page of April 16 (see top image of this story). He said:

What I said yesterday has come true, if you look at the newspapers today (…) I think this is very unethical and is hurtful to children, and shows that some people want to use threatening ways to smear whoever wants to be close to the police. Citizens need to see this clearly or a danger against Hong Kong and the nation’s security will always be present.

For those endangering Hong Kong’s security using fake news, we will launch an investigation right away, and when there is evidence, we will pursue a prosecution.

On the same day, pro-Beijing newspapers began running opinion columns advocating for a clampdown on the media and the closure of Apple Daily.

On April 16, Ta Kung Pao published an editorial claiming that a number of “anti-China” media outlets, including Apple Daily, had made use of a national security loophole to engage in advocacy for Hong Kong independence disguised as news reports.

It highlighted a news story published on Apple Daily on April 15 about an advertisement campaign organized by the offshore activist group “Stand with Hong Kong,” labeling the report as de facto pro-Hong Kong independence propaganda.

It then called for a “payback” on Hong Kong media outlets, in particular Apple Daily:

Apple Daily has become a loophole in Hong Kong’s national security. The loophole will continue to exist while [authorities] don't get rid of Apple Daily. [Hong Kong] should act and ban Apple Daily, among other media outlets that incite violence and independence and challenge the national security law.

In addition to Apple Daily, the pro-Beijing paper also named The Stand News for “inciting hatred against the police authorities.”

However, these latest talks about media collusion with foreign forces in spreading disinformation suggest that the police could instead use the national security law to prosecute media organizations.