As St. Vincent's La Soufrière erupts again, experts say it's ‘not over yet’

The alert level remains at red 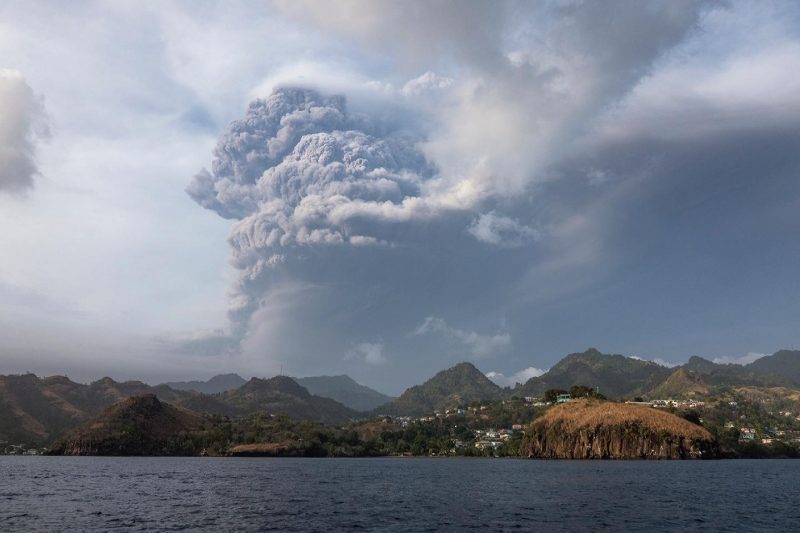 La Soufrière's second explosive eruption in St. Vincent and the Grenadines on April 9, 2021; Questelles Bay is seen in the foreground. Photo by Nadia Huggins, used with permission.

St. Vincent and the Grenadines’ La Soufrière volcano, which has been sporadically erupting over the past ten days, continues to be very active, as yet another explosion took place on April 18.

This most recent eruption, again quite substantial, is about the sixth major blast from the stratovolcano since April 9, though some Vincentians who have been keeping a close eye on its activity suggest the number of explosions is closer to 30. This time, the eruption began in the late afternoon (GMT-4):

There were also concerns about the latest eruption's ash cloud movement on an island that is already heavily covered in volcanic residue:

There was an explosive eruption at the La Soufrière at approximately 4:49 p.m. today. Ash clouds are moving towards the south and west of the island. Alert level remains RED. #LaSoufriereEruption2021 #notoveryet #StaySafe

Photo thread from today's field work in the Leeward side of the red zone. This is the start of the Leeward trail to #LaSoufriere – covered in ash and deposits from the pyroclastic density currents that reached the coast. Credit: Richard Robertson, UWI-SRC @VincieRichie pic.twitter.com/yN9Yp4xQcL

On Twitter, St. Vincent's National Emergency Management Office (NEMO) explained that such activity was to be expected:

La Soufriere continues to erupt. Its pattern of seismic activity over the last few days is typical of the growth and destruction of lava domes. Explosions with accompanying ashfall, of similar or larger magnitude, can occur with little or no warning #LaSoufriereEruption2021

Meanwhile, officials have been trying to focus on relief efforts, taking care of displaced residents, and educating the public about how to stay safe. It is a task made that much more difficult because of pandemic restrictions; therefore, much of that thrust has been online, via free webinars and social media infographics.

Still, some netizens — including one tour guide — risked capturing footage of La Soufrière from a dangerously close vantage point:

It is a decision Professor Robertson chastised as being foolhardy:

Anyone on the volcano at [this] time is at risk of dying horribly from blunt trauma to the body, from excessive burns, and from asphyxiation. Anyone at the summit as you were today will certainly be killed if it has one of the kinds of eruptions that it had on the very same day that you visited. […]

Stop putting yourself, your co-hikers, and potentially the search and rescue team that would come to get you if something happens [at risk]. This is neither brave or useful […]

Although no one who has been following the tempestuous eruptions of the last ten days should need further convincing, the images underscore what the experts have been saying all along: La Soufrière's 2021 eruption isn't over yet.