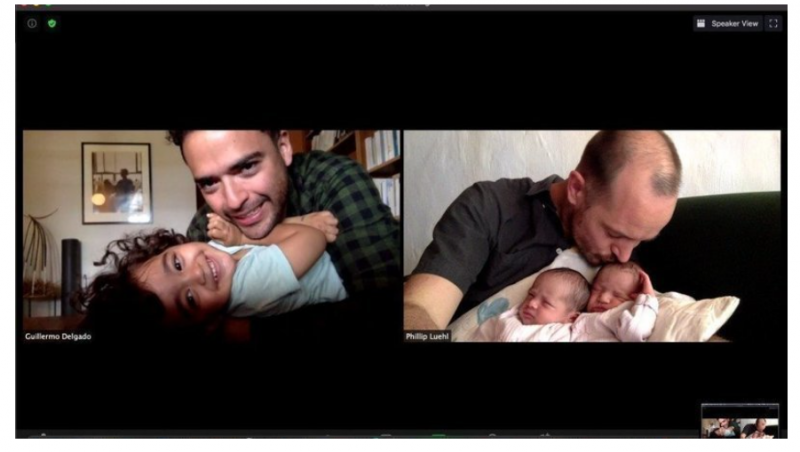 A photo of Phillip Lühl (right) and his husband Guillermo Delgado with their family. Photo sourced from their petition page with permission.

A Namibian high court denied, on April 19, travel documents to the infant twin daughters of a same-sex couple who were born in South Africa via surrogacy in March, in the latest development of a case that has caused a nationwide debate on LGBTQ+ rights in Namibia.

Phillip Lühl, a Namibian citizen, has been in Durban, South Africa, since the birth of his and his Mexican-born husband Guillermo Delgado's legal daughters Paula and Maya, but has been unable to bring the babies home to Windhoek where the couple lives.

The Namibian Ministry of Home Affairs has so far denied the newborn twins the documents necessary for them to travel to Namibia, demanding Lühl undergo a DNA test in order to determine parentage.

Lühl then took the Ministry to court, arguing that its request for a DNA test contravenes both Nambinian and international law, but had his petition denied. As the newspaper The Namibian reported on April 19, judge Thomas Masuku ruled that it would be “judicial overreach” to obligate the authorities to issue the travel documents to the two girls.

The twins’ South African birth certificates state both Lühl and Delgado as their parents, but neither of the men has South African citizenship. The two girls “have been rendered de-facto stateless,” as Lühl says on a public document he drafted with the main details of the case.

The couple has another son who was born in South Africa via surrogacy in 2019. While they were able to bring the child to Namibia, his application for citizenship by descent has been pending for the past two years.

Lühl and Delgado's case has been widely debated on social media and, for many Namibians, it is a symbol of the country's LGBTQ+ community's struggle for equal rights.

The couple's quest to reunite their family unfolded as Namibia prepared to celebrate its independence's 31st anniversary on March 21, which led many to regard the protection of sexual minorities as one of the failures of the country's institutions.

I was born in exile & have many friends who had children abroad. None of us were subjected to DNA testing to prove that one of our parents is Namibian when we applied for citizenship. Are we making the rules as we go along? https://t.co/94rlXHDb1c

Had these babies been born by a heterosexual couple, would Kapofi still ask for DNA? He needs to stop running that Ministry like its his house.

When children of the liberation struggle returned home in 1990, no one asked for Paternity test because that would be a violation of their dignity.

An online petition started by Lühl and Delgado demanding the authorities allow them to reunite their family has gathered over 4,800 signatures so far.

On March 25, when Lühl's application stood the first court hearing in Windhoek, around 100 people staged a solidarity rally.

Several rights groups have come out in support of the couple, including Sister Namibia, who over the course of several days published on its Facebook page stories of other same-sex couples who've had similar experiences with the Namibian authorities.

Ndiilokelwa Nthengwe, advocacy and communications officer at Out-Right Namibia, a non-profit that advocates for the rights of sexual and gender minorities, told Global Voices in an email:

As an organization, [the protest] is something that's been long overdue, as we advocate not only for the right to have a family, but for marriage equality that is inclusive of LGBTQIA+ families.

She added that the case has broader implications for Namibia:

LGTBQIA+ families who are socio-economically vulnerable often do not have adequate resources to challenge the state and its oppressive and discriminatory systems, but socially, families continue to live amongst the broader Namibian population.

Not all voices on social media showed solidarity to Lühl and Delgado. Some pointed to the Namibian law and the fact that neither surrogacy nor same-sex marriage is allowed in the country.

Just because it's legal in SA does not make it right here.. Aiye mkwetu

Some voices condemn homosexuality in and of itself, regarding it as a “Western phenomenon,” to be rejected. Others point to religious values.

This is good. This is Afrika not Europe we font accept all nonsense here

God did not create Adam and Steve, he created Adam and Eve no confusion here. That’s shows you that men you wre not created with a womb that’s why they went in agreement with someone. The law of God remain and he said you disobey the is a curse that come upon you and ur children

At this point, the contradiction of the argument becomes apparent. On the one hand, they see homosexuality as an outgrowth of Western influence in Africa while justifying discrimination with reference to Christian values — which were imposed by European colonialists.

Nthengwe comments on this entanglement of the decolonial struggle and homophobic statements:

The fight for liberation has always been highjacked by cisgender heterosexual (black) men, and this fundamentally erased the efforts and advocacy of women and consequentially, that of the LGBTQIA+ contributions (intentionally and unabashedly). This is the colonial legacy and hang-up nobody boldly intends to address fully and honestly”, writes Ndiilokelwa Nthengwe.

It remains to be seen whether the authorities will fulfill the rights of Lühls and his family. In the meantime, the displays of solidarity by Namibians, both on social media and at the protest in Windhoek, are a testament to the aspirations of some parts of the country's society, whose aspirations might no longer be reflected on its laws.