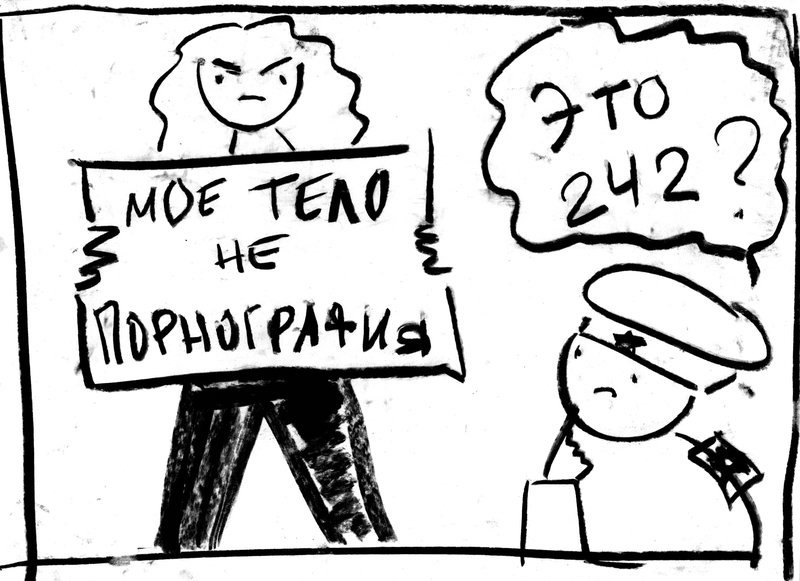 “My body is not pornography!” reads the protester's placard. “Is this an Article 242?” wonders the policeman. Article 242 of Russia's Criminal Code criminalizes the creation and exchange of pornographic materials. Image (c): Yulia Tsvetkova. Used with permission.

Yulia Tsvetkova, a feminist artist, theatre director, and LGBT activist, is facing six years in prison on charges of distributing pornographic images for sharing her drawings on social media that supporters have called “body-positive.”

On April 12,  a court in Kosmomolsk-on-Amur, in Russia's Far East Khabarovsk region, began the latest trial in Tsvetkova's case. The trial is taking place behind closed doors, allegedly because pornographic imagery is being displayed.

Tsvetkova, a 27-year-old artist and theatre director, is accused of “creating and distributing pornographic materials” (Article 242 (3b) of Russia's Criminal Code) for posting several drawings of naked women and vaginas on her VKontakte page. The drawings are part of her body-positive art project, “A woman is not a doll.” The charges under Article 242 could result in a prison sentence of up to six years.

Tsvetkova's mother, Anna Khodyreva, told AFP that she was not allowed to attend the closed hearing and called the case “absurd.” She said that everything was “being done to ensure that we have as little information as possible.”

Natalia Zvyagina, Russia director for Amnesty International, criticized the decision to have a closed hearing and said Russian authorities should “guarantee a public hearing” in Tsvetkova's case. Along with Memorial human rights center, Amnesty has labeled Tsvetkova a prisoner of conscience and has called on Russia to remove all charges and to “stop targeting feminist, LGBTI and other activists”.

A history of persecution

Yulia Tsvetkova has previously run several educational projects in Khabarovsk, as well as a youth theatre, online groups on feminism and sex education for young people, and a Vagina Monologues group which celebrated the power and uniqueness of the female body. 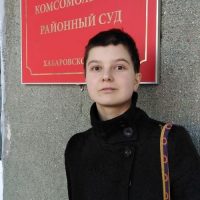 She was initially detained in November 2019, and placed under house arrest until March 16, 2020. In December 2019, she was found guilty of violating the Russian law banning “propaganda of non-traditional sexual relations among minors.” She was fined 50,000 rubles (USD780), and in July 2020 was saddled with another fine of 75,000 rubles (USD1,050) for posting a drawing featuring same-sex couples with children with the caption “Family is where love is. Support LGBT+ families.”

She told AFP last year she believes the authorities were using the pornography charge as a opportunity to crack down on her LGBT activism, because it is easy to pin on citizens and carries a long sentence.

In a 2020 interview to oDR, openDemocracy‘s section on Russia and the post-Soviet space, Tsvetkova spoke about the impact of her house arrest and discussed threats she has faced from anti-LGBT activists. The current criminal case against her was launched after a complaint lodged by Timur Bulatov, a well-known anti-LGBT activist. She also reflected on her status as a political prisoner:

I feel that today there are so many invisible female political prisoners: mothers, wives – women who bear an incredible burden as a result of political legal processes. People don’t talk or write about them, or if they do, it’s in terms of “somebodies’ mums, somebodies’ wives”. Political prisoners are heroes, but women are the invisible service staff.

The next hearing in Yulia Tsvetkova's case will be held on May 6.