Samoa’s surprise election stand-off, and the politician who will be a king – or queen – maker

The country could soon have its first female prime minister 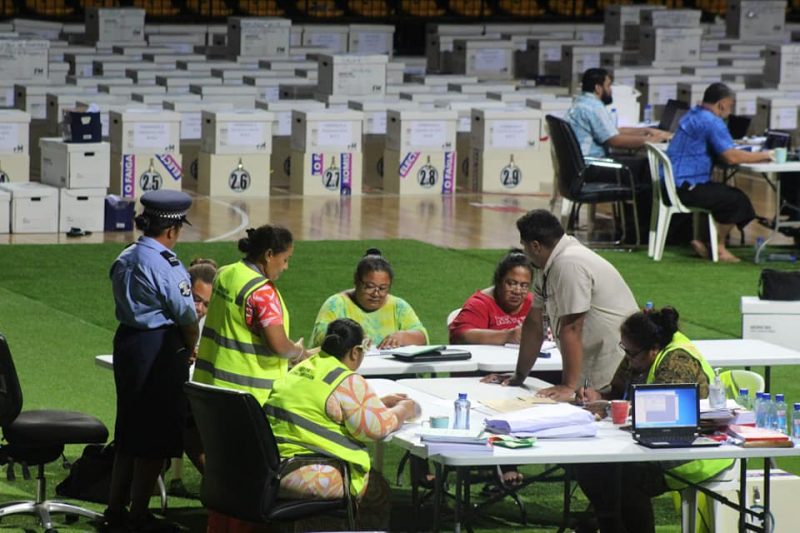 Counting of votes in Samoa. Photo from the Facebook page of the Office of the Electoral Commission – Samoa

Despite confident predictions from Samoan Prime Minister Tuilaepa Dr Sa’ilele Malielegaoi that his Human Rights Protection Party (HRPP) would take at least 42 seats in the 51-member parliament, the April 9 election produced an unexpected result. HRPP got just 25 seats – the same number as the opposition Fa’atuatua I le Atua Samoa ua Tasi (FAST) Party. This tie has resulted in the extraordinary situation that the vote of one independent MP – Tuala Iosefo Ponifasio, from Gagaemauga No. 1 district – is likely to decide who will form Samoa’s next government.

The April 9 election was Samoa’s seventh since universal suffrage was granted in 1991. Voting was compulsory for the 128,000 eligible voters of the Pacific Island state, in which 192 candidates competed for the 51 seats for a five-year term in the legislative assembly. The United Nations in Samoa team highlighted the peaceful nature of the election process:

Voting in #Samoa continues in an orderly, quiet fashion. Remarkable preparations, great example of a solid democratic process leading up to the formation of the new Parliament. Learn from #Samoa what free and fair elections look like. We @un_samoa stand with you and your choices. pic.twitter.com/esngcs8cUH

HRPP has dominated the parliament over the last 39 years, with Tuilaepa in power since 1999, and this most recent election marks the first time an opposition party has won a significant number of seats. This is seen by some observers as an indication of a loss of public support for the prime minister and HRPP.

Samoa Observer, the country's largest newspaper group, interviewed young voters including Mulimai Laalai, who spoke about the significance of the election:

Ever since the HRPP came in power I've never seen any party come close to challenging them. But the 2021 General Election is different from previous elections as we now have two parties who are tied and this is a new development. I find it interesting and have the right to vote for whichever candidate, for change and improvement of our country.

Writing for the Devpolicy blog, Mata’afa Keni Lesa argued why the results should be interpreted as a loss for the HRPP:

We live in a country where many generations have known no other government other than the HRPP. The last change of government was nearly 40 years to this day.

The election results have already guaranteed a robust opposition party, an essential element of democracy that has been missing for a decade. It has been ten long years since Samoa has had an official opposition party recognised in parliament.

The tied election result is already a bitter defeat for Prime Minister Tuilaepa and his party who had arrogantly predicted that they would return to power with no less than 42 seats.

The MP who will choose between the HRPP and FAST said he will consult his constituents and wait for the final results before making a decision. He could be either a kingmaker or queenmaker – FAST's leader Fiame Naomi Mata’afa would be Samoa’s first female prime minister if elected.

Fiame acknowledged FAST’s team effort for its election performance, while admitting she herself was surprised by the results. She told Radio New Zealand:

I think what we have been able to achieve is quite phenomenal. And I must credit the team and the immense support, not only locally but the Samoan diaspora. You know it is quite a phenomena. I would like to have a bit of time to see how that happened and why it was happening.

She also told tvnz that, regardless of the final outcome, she believes it is important to support women in politics:

I've been a very strong advocate of women's participation in politics. I don't think it's just being Prime Minister – I think [it's] in any field where women have trailblazed – so I think I've always been conscious… about being a role model.

Meanwhile, Samoan Observer published an editorial on how the deciding vote should be made by Tuala in consultation with his constituency:

This election may have given it unusual significance and power. But the seat is bound tightly to the country's 50 other constituents by a much deeper concept: Samoan nationhood. That puts the significance of a five-year parliamentary term in its proper perspective.

The district must make their decision about which party they believe can govern Samoa best. That is a judgement that must only be decided upon by a process of deliberation within the villages that make up the district – not outside it.

On April 14, Samoa’s election body announced that it had found double entries in the voting ballots, but the overall results have remained the same. At the time of writing, there has been no announcement of the final results of the elections, but it is expected that the new parliament will be convened before the end of the month.