How resisting the security law clampdown brought out Hongkongers’ creativity 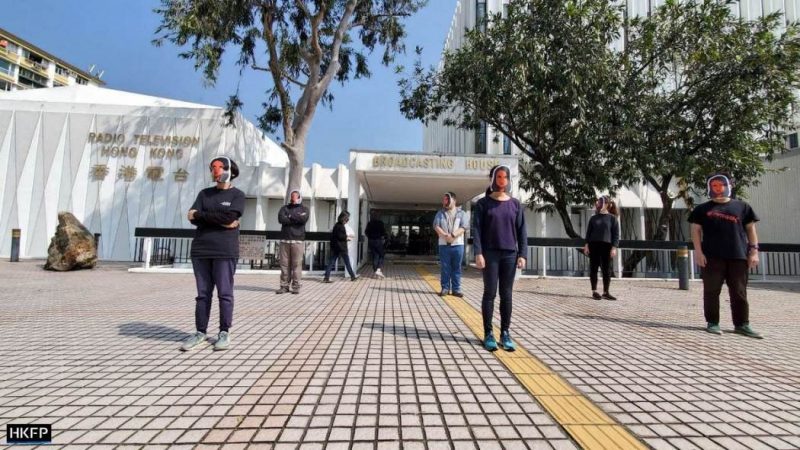 A socially distanced protest outside the RTHK broadcasting house. Photo: Candice Chau/HKFP. Use with permission.

The following post was published by Hong Kong Free Press on April 15, 2021. A lightly edited version is published on Global Voices via a content partnership agreement.

On April 15, Hong Kong marks its first National Security Education Day since Beijing imposed the controversial new law last June. Despite growing restrictions on political activity and freedom of expression, city residents have continued to carry out acts of resistance. HKFP takes a look at how Hongkongers are continuing to make their voices heard.

Last month, hundreds of people queued outside the West Kowloon Law Courts building to support 47 democrats charged under the national security law over their participation in primary elections for the since-postponed Legislative Council election.

Despite having little or no chance of getting into the court, large numbers – many dressed in black to show solidarity – stayed in the orderly queue for hours to make their point.

Despite a heavy security presence and a police warning, people chanted protest slogans such as “five demands, not one less,” and “liberate Hong Kong, revolution of our times,” which may be in violation of the national security law.

Apart from lining up to attend court hearings, Hongkongers have also resorted to an activity for which they are renowned – queueing up to shop. Most notably, they got in line to support AbouThai, a retail chain that was raided by Hong Kong Customs over missing safety warnings on some of its products.

According to the Security Bureau, 10,242 people have been arrested over the anti-extradition bill protests, and 2,521 people have either completed or are involved in ongoing legal proceedings.

As the number of court hearings piled up, a new group of people began to attend to show solidarity and lend support not just to well-known activists, but also others who were prosecuted during the anti-extradition bill protests.

When prison vans leave court buildings, it is not uncommon to see people chasing after them shouting goodbyes and support. Others have become “court watchers,” regularly turning up to the public gallery to witness trials.

With limited access to news and information behind bars, associates of remanded or jailed politicians have also provided addresses for the public to send letters to them.

Prisoners’ rights groups such as Wall-fare and Swallow Life are also pairing up jailed protesters with members of the public as pen pals to keep inmates in touch with the outside world.

Wall-fare has also gathered items such as snacks and cleaning supplies approved by the Correctional Services Department for activists in custody or in jail.

Shopping at AbouThai is not an isolated trend. In fact, many Hongkongers have made an effort to support pro-democracy shops and restaurants in their day-to-day life.

These shops are often referred to as “Yellow shops,” and netizens have come up with lists of venues that fit the criteria – from cinemas to grocery stores – as an attempt to build a “yellow economy” and to sustain the pro-democracy movement.

Many also boycott “blue stores,” which are affiliated with the establishment, China, or the pro-Beijing camp.

Protests, rallies, and street booths have adapted to the anti-pandemic regulations introduced in March 2020 by meeting in smaller groups. In cases where the number of participants exceeds the stipulated limitations (currently a maximum of four people), participants made sure to keep socially distant by standing at least 1.5 metres apart.

However, eight members from the League of Social Democrats and the Labour Party were jailed for 14-days and handed an 18-month suspended sentence over a socially distanced protest on Labour Day last year.

Meanwhile, many have continued to lay floral tributes, pineapple buns, and souvenirs at 2019 protest hotspots and sites where demonstrators lost their lives.

All pro-democracy lawmakers quit the Legislative Council in November 2020 after the government disqualified four of their colleagues: Kwok Ka-ki, Alvin Yeung, Kenneth Leung, and Dennis Kwok.

The move came after the Standing Committee of the National People’s Congress (NPCSC) passed a resolution allowing the government to oust lawmakers that were deemed to be endangering national security.

After the implementation of the national security law, “Liberate Hong Kong, Revolution of Our Times,” a slogan popular during the anti-extradition bill protests, was deemed illegal by the government.

In response, the public held “blank placard” protests in shopping malls across the city in July last year.

Post-it notes normally filled with protest slogans and messages of support were left blank on Lennon walls across the city.

Buying and reading the pro-democracy tabloid Apple Daily has become an act of resistance in itself as its founder Jimmy Lai was arrested and charged under the national security law.

The media tycoon was accused of committing fraud by violating land-lease terms, as well as using Twitter and his newspaper to “request” foreign governments to impose sanctions on Hong Kong and mainland Chinese officials.

With many pro-democracy activists and politicians facing lawsuits and huge legal fees, some started up Patreon pages that allow supporters to subscribe and provide monthly financial support to cover legal fees and living costs.

Despite police crackdown on crowdfunding, the 612 Humanitarian Relief Fund, which was set up in June 2019 to support legal and other urgent expenses of protesters, raised more than HK$11.5 million (around 1,4 million US dollars) in six days in January following an appeal to the public for funds.

Hong Kong people have also taken their political activism into the game world. A group of activists have developed the game “Liberate Hong Kong,” which recreates the experience of participating in an anti-extradition bill protest.

The popular Nintendo game Animal Crossing was also used to express political dissent by Hongkongers, as they have created pro-democracy and anti-government messages within the digital world, including flags containing protest slogans.

Associated with the color representing the pro-democracy camp during the protests, wearing yellow face masks became a symbol of dissent especially after a judge requested people in court to change their facemasks as one “should not express their personal opinion in court.”

However, Hong Kong face mask manufacturer Yellowfactory suspended its business operations after pro-Beijing lawmakers and newspapers said one of their designs violated the national security law.

One of the manufacturer’s most popular design was printed with “F.D.N.O.L.” – an abbreviation of the protest slogan “Five Demands, Not One Less”

Hongkongers who moved overseas have also continued their expression of dissent even after they have left the city.

Eight Hong Kong pro-democracy activists in self-imposed exile overseas have launched a charter calling for democracy and autonomy in the city, as well as solidarity among Hongkongers overseas.

Apart from coordinated efforts by more well-known figures, Hongkongers have also organised rallies to support other groups. For example, hundreds of Hongkongers appeared in the solidarity rally in Manchester in support of pro-democracy protesters in Myanmar on April 11.