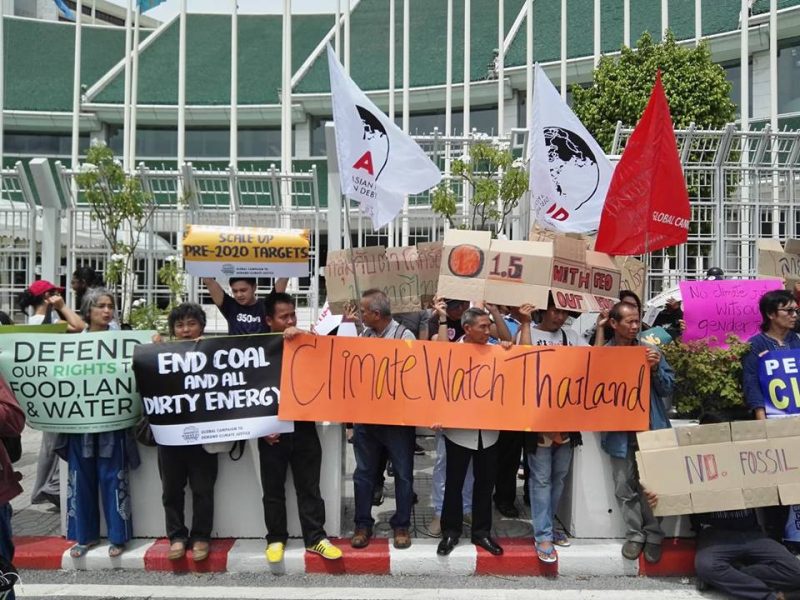 The Thai government has drafted [2] a law on non-government organizations (NGO) which human rights groups have condemned as containing provisions that could be used to harass activists and leaders of civil society groups.

The Office of the Council of State released the Draft Act on the Operations of Not-for-Profit Organizations in February, and conducted a public consultation on it between March 12 and 31.

If passed into law, NGOs will be required to register under a new set of guidelines prescribed by the government.

According to government spokesperson Ratchada Thanadirek, there are 87 registered NGOs in the country, many of which she said claim to be non-profit but are funded and do not work for the public interest. She said [3] the new law, if passed, will ensure transparency.

This is not intended to limit their rights, but is aimed at ensuring that money they receive will be properly used and their activities will be conducted in accordance with the objectives of non-profit organisations, for true benefits.

Since 2020, massive protests have been organized [4] across Thailand to call for reforms to the monarchy and the military-drafted constitution. In response, authorities have said that some of the protests are backed by groups with foreign funding.

Three UN Special Rapporteurs issued a statement on March 26 which expressed concern regarding some provisions of the bill. For example, section 1 stipulates that the aim of the draft act is “to regulate the operation of not-for-profit organizations in the Kingdom to ensure propriety, morality, openness, transparency, and the genuine serving of public and national interest without any hidden and fraudulent agenda”. The UN Special Rapporteurs warned [5] that this provision could be “used arbitrarily to restrict the activities of not-for-profit organizations and human rights defenders”.

[It] may suggest that the authorities insufficiently acknowledge the expertise and support provided by these organizations, and even consider them as a potential threat to the society. We believe such a provision stigmatises civil society…

Several civil society groups issued [6] a joint statement criticizing the draft act. They noted with concern that the bill’s definition of an NGO is too broad, allowing it to cover any group or association and compel them to register and adhere to the law’s stringent requirements.

The broad terms of the draft act would allow unequal treatment of certain disfavoured groups and carry dire consequences for associations critical of the government, with little scope to legally challenge government decisions.

They questioned the draft act’s section 6, which allows authorities to enter civil society organizations’ offices and make copies of their electronic communications traffic data, without prior notice or a court warrant. They also highlighted the severe penalties for violating the law – a jail term of up to five years, and a fine of up to 100,000 THB (approx. 3,200 USD), or both.

Piroj Paraphet, an adviser to the Union for Civil Liberty, told [7] Thai Enquirer about the potential harsh impact of the draft law on the NGO community.

This could block a vast amount of activities beneficial to society, while the punishment is disproportionate.

The state officials will have the power to control NPOs’ [non-profit organizations] activities, how they receive foreign funding and they will be registered and if they do not abide by these conditions then they will be prosecuted as criminals.

Sappasit Khumprapan, chairman of the Centre for the Protection of Children's Rights Foundation, said the bill’s original version was different and that the current version is “extremely rightist” [8].

The Bangkok Post published [9] an editorial which accuses some elements in the government of drafting the law in order to intimidate opposition forces, especially those clamoring for legal and democratic reforms.

It's shameful that an elected government would issue such a contentious bill.

Amid escalating polarisation, the state and some extreme right elements have attempted to discredit a few NGOs with claims they receive foreign donations. They single out those scrutinising injustices perpetrated by the state and cases involving Section 112 of the Criminal Code (or the lese majeste law), and also charter amendments, branding them as nation-haters.

The move has justified fears the bill will clip the wings of civic agencies that challenge unjust laws and law enforcement. The government must be open to scrutiny. If it practises good governance, there is no reason for concern and the new law should not be used in a dubious way.

The cabinet will review the bill this month before submitting it to the parliament.