46 children have died during the protest crackdown and air strikes 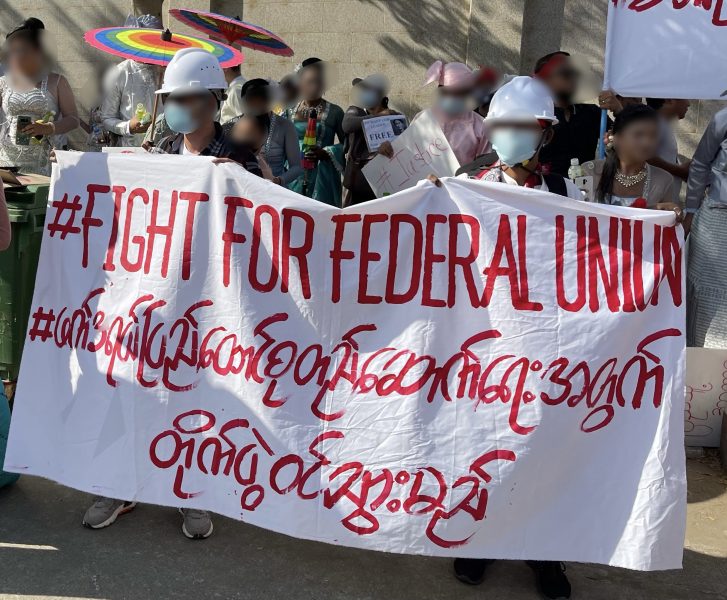 Anti-coup protesters hold a banner calling for the restoration of civilian rule in Myanmar. Photo by author.

This article originally appeared on Medium and was written by a blogger who doesn't wish to be identified. An edited version is published here.

Throughout March 2021, Myanmar’s military regime continued its brutal suppression of civilian movements that were calling for the restoration of democracy in the country since the military coup of February 1.

Since February, protests across the country have been challenging the military rule. Starting in March, the junta ramped up its crackdown on peaceful protesters.

As pressure from the ethnic armed organizations (EAO) grew stronger, the final week of March saw the bloodiest reprisals from the Myanmar military, which launched airstrikes on villages in EAO-controlled areas. As of April 2, 550 protesters, including 46 children, had been killed while around 12,900 villagers have fled their homes to escape clashes between the military regime and EAOs in Karen and Kachin states.

Below is a timeline of violence inflicted by the junta on civilians and protesters during the second half of March:

On March 19, a military operation in a small city of Aung Ban in Shan state was responsible for the deaths of nine protesters.

Starting on March 21, the regime intensified the violence in Taunggyi, the capital of Shan state. Footage shared on Facebook showed soldiers shooting protesters and torturing civilians in their homes.

On the same day, the military ramped up night crackdowns in parts of Mandalay, Myanmar’s second largest city, and killed five people, including a 15-year-old boy. The crackdown continued in Mandalay the next day with the killing of four more people, one of whom was a 13-year-old boy.

On March 23, soldiers raided a home and shot a seven-year-old girl while she was in her father’s arms. Her 19-year-old brother was also severely hit in the head with a rifle butt and was arrested by the soldiers. These children were the first of many victims of military’s intensified attacks against the youth.

In three days of continuous violence in Mandalay, 22 people were reportedly killed.

On March 24, a nationwide “silent day” strike was organized across the country, where people “protested” by not going out on the streets while shops and markets were also closed.

Junta troops beating & kicking detained protesters while transferring them from a military truck to a prison van in #Myeik yesterday. Over 30 anti-coup protesters were arrested in #Myeik on #Mar26Coup & 4 were killed. #WhatsHappeningInMyanmar
video: CJ pic.twitter.com/5WguXEvEQC

On Saturday, March 27, while junta leaders celebrated “Armed Forces Day” in the capital Nay Pyi Taw, the forces of the regime unleashed the most ruthless attack against protesters causing a bloodbath in 40 cities across the country. The death toll reached 114.

At least 114 people were killed in brutal attacks by the junta's armed forces in more than 40 cities across Myanmar on Saturday. Our reporting has been updated to reflect these figures. https://t.co/tcjRxkWICm pic.twitter.com/kkUtLCNP4L

That day, five children were also killed. A 13-year-old boy from Mingalar Taung Nyunt ward of Yangon was shot by riot police while he was playing on the street. His body was taken by the police. A one-year-old child was also severely injured with a rubber bullet. By that time, 29 people under 18 had already been killed by the military across the country.

In the city of Dawei, CCTV footage showed the regime’s soldiers on a truck trying to kill three civilians on a motorbike that was merely crossing the street. Two escaped but one person was shot dead.

Unpleasant to watch the brutality of the junta groups gang beating a helpless civilian in #Myeik today #Mar27Coup. Too long the junta groups have been enjoying impunity for crimes they've committed against civilians across #Myanmar. #WhatsHappeningInMyanmar pic.twitter.com/vCwP29c9CJ

Perhaps the most heinous crime was a military raid during a night in Mandalay when they burned a resident alive.

Before the bloodbath, the regime confirmed in a state television announcement that it was enforcing a policy of shooting people in the head, and warned that it would do more if people continue protests.

Because of this and the high number of fatalities, the international community dubbed Myanmar military regime’s Armed Forces Day as a “Day of Shame.”

As a symbol of fascist resistance, activists asked the people to come out for nationwide demonstrations on March 27.

On Sunday, March 28, the military crackdown in the central city of Monywa, where mass protests had been going on every day, saw five people killed.

Women's rights activist Khukhu Celina of the organisation Women for Justice was killed by the junta’s armed forces during a crackdown on an anti-coup protest in Kalay, Sagaing. She was shot in the chest with live ammunition. Three others were injured in the attack, locals said. pic.twitter.com/7YhpIiPw4n

In Yangon, there were also reports of the military using live grenades in the neighborhood of Hlaing.

At night, the military launched a crackdown in the city of Pathein in the delta region amid electricity and internet blackouts.

The crackdown continued in March 29 in South Dagon, where the regime’s forces used RPG (rocket-propelled grenade) launchers to break down the strong resistance of the protesters. Another person was also found with his/her body burnt at night in the street by the military (it was not clear if he/she was still alive at the time of burning). Twenty-one people were confirmed dead during the two-day clampdown.

Civilians from the city of Kalay and nearby areas, where there is a majority of Chin ethnic people, had been also putting up a tough fight against the military forces for three days since March 30. Seventeen civilians died during that clash.

Since March 11, the KIA (Kachin Independence Army) had been attacking military bases near Hpa-Kant, a northern town in the Kachin state. The military reportedly retaliated with air strikes against the KIA.

A decade-long civil war between the KIA and the Myanmar military has been ongoing since 2011 with occasional ceasefire agreements.

The KIA claimed that it renewed offensives against the junta because of the Tatmadaw's atrocities against civilians.

On March 23, the AA (Arakan Army) from the Rakhine state also condemned the violence of the Tatmadaw forces. This was significant because the military granted a ceasefire with the AA when the coup began, which ended bouts of intensified fighting in the Rakhine state that began in 2018. On March 11, the military council had also removed the previous designation of the AA as a terrorist group.

On Armed Forces Day, March 27, the KNU (Karen National Union) attacked and captured a military base near Thee Mutra in the Karen state.

On the same evening, the Myanmar military started retaliating with airstrikes in KNU controlled territories. Continuous aerial bombings during the weekend had forced over 10,000 people from nearby villages to flee their homes. Air attacks continued until March 30 which killed at least 20 civilians.

More than 10,000 Karen people living in KNU-controlled areas have been displaced as a result of the coup regime's airstrikes. In the four days between Mar 27 to 30, these strikes killed 20 civilians and wounded at least 14. #WhatsHappeningInMyanmar pic.twitter.com/IpyJJH9U0l

By March 28, the KIA had captured four military bases near the city of Hpa-Kant. The next day, the military retaliated with an air strike. More people had fled due to the fighting in the Hpa-Kant area.

In #Inganyan tsp in #Kachin 195 households in all villages: 904 people are fleeing. Refugees need emergency assistance but Military Council blocks aid. Refugees fled the village on Mar 15 & are currently in need of food and daily necessities.#WhatsHappeningInMyanmar #Apr2Coup pic.twitter.com/8kEDQ8NuHr

On March 30, a coalition of ethnic armed groups, namely the MNDAA (Myanmar National Democratic Alliance Army), the AA (Arakan Army) and the TNLA (Ta’ang National Liberation Army) released a statement saying they will defend and stand with civilians if military crackdowns continued.

Over 46 children have died in the past two months during the protests and the air strikes since February 1.

Here Are the Children Killed by the Myanmar Regime’s Forces Since Feb. 1#WhatsHappeningInMyanmar
——————–
Help The Irrawaddy Report the Truth from Myanmarhttps://t.co/zUJfzEV4Mlhttps://t.co/580gyKo4XE

Throughout the second half of March, many cities across Myanmar continued to show defiance by demonstrating in the streets.

Protesters also chose unusual hours like dawn or night in organizing actions. Other protests used symbolic actions such as red balloons or flowers, without people to avoid being arrested or killed.

On the night of March 31, the Committee Representing Pyidaungsu Hluttaw (a counter government body set up by ousted parliament members), introduced the Federal Democracy Charter as a roadmap to move forward the country’s political future in the fight against the brutal military regime, and declared that the 2008 Constitution, drafted by the previous junta, had been abolished.

Over the next few days, people protested by burning the constitution and also its flag across different cities.

Undeterred by brutal crackdowns, anti-regime protesters in #Monywa, Sagaing Region, took to the streets for a 54th day on Apirl 1. Protesters burned copies of the military-drafted 2008 Constitution, celebrating the declaration of its abolition by #Myanmar elected MPs. (Photo: CJ) pic.twitter.com/1FJtHoCxBn