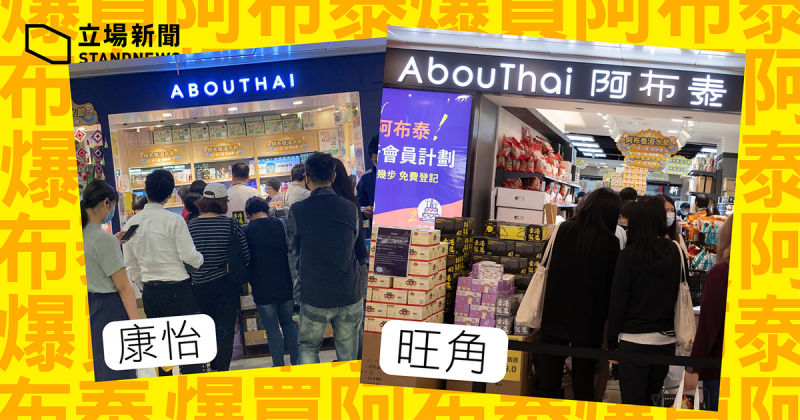 Long queues outside AbouThai after Customs raid. Image from the Stand News. Use with permission.

Hong Kong customs deployed around 100 officers to raid and seize goods from retail chain, AbouThai, on 8 of April, citing a violation of the Consumer Goods Safety Ordinance for inadequate labelling on 14 types of products.

AbouThai is owned by Mike Lam, a pro-democracy businessman who started his retail business in 2015. He was fired by the Hong Kong customs after he appeared on TV in a protest against mainland Chinese parallel traders who took advantage of multiple visas to import goods from Hong Kong without paying tax. He was 26-year-old when he lost his job and his Thai wife had just arrived in Hong Kong with their three month old daughter.

To support the family’s living, he borrowed HK$100,000 (approximately US$14,000) from a bank and opened a 60 square-feet store in a grassroots district, selling Thai groceries. Currently, the retail chain has 26 stores all across Hong Kong.

Lam took part in the pro-democracy primaries in July 2020 and became one of the 47 activists arrested on charge with “conspiracy to subvert the state power” under the National Security Law.

The custom officers stormed AbouThai’s warehouse and its 26 stores, confiscating goods worth more than a million Hong Kong dollar due to the absence of Chinese labels for 14 types of products. A 33-year-old manager was arrested during the raid.

The retail chain apologized in a statement on its Facebook page for its negligence and pointed out that in usual practice, the customs would just issue warnings or prosecution letters. The city-wide raid, the statement said, was out of the ordinary:

[…]such extreme prosecution practice, perhaps is because since its establishment, AbouThai has been identified with certain colours. But who doesn’t have colour in Hong Kong? Hong Kong is a metropolitan with eastern and western culture, colours represent a diverse culture and this makes Hong Kong attractive for investors from around the world. In face of repression, AbouThai will survive humbly. All we want is to continue serving Hongkongers […]

AbouThai is a famous pro-democracy “yellow” shop of the so-called “yellow economic circle” – an initiative to provide mutual support and express solidarity among pro-democracy citizens. A number of yellow shops showed their support by offering discounts to customers who bought from AbouThai in the coming few days.

In a press statement released on April 9, the customs denied its action as “repression”, claiming that the city-wide operation was taken after officers received complaints and tested some products.

Last year, the Hong Kong Customs also crack downed on the sale of “not made in China” masks under the allegation of breaching trade description law. A core member of the now dissolved opposition party, Demosisto, was arrested during the raid.

So this issue was about overseas product sold by AbouThai in Hong Kong not having Chinese warning labels, even though everyone knows what are the products they are buying. Such a big offence, must confiscate HK$1m and have a whole media show, right? https://t.co/GkZlIx0Jhm

The losses brought to the retail chain was huge as the raid took place just one day before the store’s annual “Songkran Festival” sale.

AbouThai is running their annual “Songkran Festival” sale for a week from tomorrow, as the Thai festival begins next week. But now, a lot of their goods have been seized. Guess someone from the Customs department is a huge fan, to pick such an opportunistic timing. pic.twitter.com/wkW6Gk17mS

In response to the raid, pro-democracy Hongkongers rushed to buy from the store. Alex Lam, reporter from Apple Daily News described the collective act as taking vote:

Now that (meaningful) elections are gone, #HKers will need to find their own way to vote. #AbouThaihttps://t.co/6fbAQTbk0T