‘Our homeland is where the money is': pragmatic citizenship in Tajikistan

Thousands of Tajiks obtain Russian citizenship to support their families. 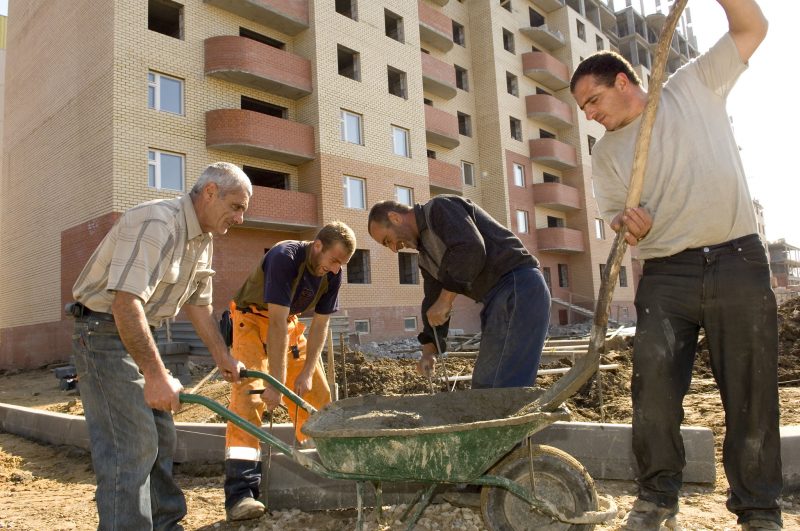 This article by Irna Hofman originally appeared on Open Democracy Russia on April 7, 2021, and is republished as part of a content-sharing partnership.

“Sister Irina, write down the name of the airport close to your house. We’ll come and visit you,” said my Tajik host brothers, calling from South Korea. “It doesn't matter where you are. The United Kingdom, the Netherlands. We obtained Russian citizenship, remember? We have the right to enter!”

Every year, thousands of Central Asian citizens try to overcome the restrictions attached to the citizenship they acquired at birth and apply for a Russian passport – just like my host brothers from Tajikistan, whom I met in 2012 when their family started hosting me during research trips.

A Russian passport eases work in Russia, but that’s not the only incentive – it enhances one’s mobility in general. In a country such as Tajikistan, acquiring a second citizenship has become commonplace, with the number of Tajik citizens receiving Russian passports increasing significantly in the past few years. In 2020 alone, more than 63,000 Tajiks obtained Russian citizenship, second only to Ukrainians.

These recently released numbers spurred an intense debate on Tajik social media. “If this trend continues, no one will be left in the country,” some said, while others shared their wish to obtain Russian citizenship too. “If it were easier to get Russian citizenship, we would also be ready… Our homeland is where the money is.”

The fact that acquiring another citizenship can enhance someone’s livelihood is not unique to Central Asia. It’s a strategy employed elsewhere too. Different terms are used to talk about obtaining a second citizenship – instrumental, strategic, affective citizenship – which all refer to the benefits a second passport may afford, whether in security, economic or social terms. Yet tensions and contradictions remain: naturalised citizens continue to identify with their country of origin, and can also face prejudice, intolerance and racism in their new country of citizenship.

For Tajiks, whose country remains bereft of economic opportunity, these choices are all too pragmatic. Many regard the need to leave as crucial, driving some, who have faced deportation from Russia, to change their Tajik name and appearance. A second passport is, however, often a much more secure and legal way to cross borders.

‘The work is heavy. But the money, the money is good’

My two host brothers were born and raised in a rural district of Tajikistan’s south-western Khatlon region, around 50km from the capital Dushanbe. They acquired Russian citizenship in 2016. The eldest studied for five years at the Islamic University in Moscow, working for a construction company on the side to finance his education. Earning a diploma enabled him to get Russian citizenship relatively easily, which meant that his younger brother – who had joined him in Moscow in 2015 – could also acquire it. Back in Tajikistan, his children automatically became Russian citizens, and his status also eased the procedure for his wife and father.

After working in Russia for two years, the brothers moved to South Korea on their Russian passport in 2018, joining the ranks of other Central Asian migrants toiling in the country. Russian citizens can enter South Korea visa-free as tourists and stay for up to two months. Some overstay this period and hope for an amnesty to remain and continue working in the country; others shuttle back and forth.

While labour migration from Tajikistan to South Korea is a relatively new phenomenon, labour migration to Russia has become crucial for the Tajik economy since the breakdown of the Soviet Union

After entering as tourists, my host brothers obtained a multiple-entry resident visa, valid for a period of three years, which allows them to work with few restrictions, and benefit from some social protection schemes. To date, Tajik citizens without a Russian passport cannot enter South Korea easily, and must instead apply for a tourist, work or business visa.

Like many others, my two host brothers had first heard about South Korea on the internet. Information on citizenship constantly circulates online, such as in this video by Migrant’s Voice, a Tajik NGO providing support to migrant labourers, in which a Tajik labourer in South Korea addresses his fellow countrymen in front of the camera:

Hello to all Tajik people. If you are coming to Korea, welcome, come! There is work for all! Don’t think that there is no work. In Korea there is work everywhere, any kind of work. The work is heavy. But the money, the money is good.

Average wages tend to be higher in South Korea than in Russia. My host brothers earn between $80-100 per day in the construction sector, paid in cash on the spot.

As one of them explained, there are no Central Asian intermediaries or other complex labour recruitment networks involved on the work site, as in Russia. The two men work hard and regularly receive phone calls from their father, mother and sisters with urgent requests for money. At the same time, they enjoy less parental and state control, as well as the relatively better living and working conditions of South Korea. When a metal construction recently fell on the eldest brother, fracturing his legs, his employer provided full healthcare coverage, while an older Korean lady looked after him for several weeks. The two brothers’ hard work is reflected in the improved living standards of their close relatives in Tajikistan. In preparation for the oldest son’s return, their father built an eye-catching two-storey ‘European style’ house in the middle of the village among Tajik-style loam-built homes.

As a result of dual citizenship, figures on international mobility and travel, including labour migration and resettlement, do not necessarily reflect people’s place of birth.

For instance, according to a recent report by the Oxus Society for Central Asian Affairs, the South Korean government issued a total of 102 work visas to Tajik citizens between 2016 and 2019. It is impossible to assess to what extent these figures are accurate, but they seem to be at least slightly underestimated. While one Tajik labour migrant in South Korea told me that around 60 to 70 Tajik people work in his company alone, another claimed that there are not that many Tajik people in South Korea, as the country remains difficult to enter. In the capital city of Seoul, he estimated, there would not be more than 100 Tajiks.

While labour migration from Tajikistan to South Korea is a relatively new phenomenon, labour migration to Russia has become crucial for the Tajik economy since the breakdown of the Soviet Union in 1991.

According to data from Russia’s Ministry of Internal Affairs, more than 1.1 million Tajiks entered Russia for work in 2019, a figure that excludes people who entered illegally or informally, without registering for work. Labour migration to Russia has come to be seen by many in Tajik society as part of a man’s social becoming. “My two boys [who haven’t reached school age yet] will study and then work in Russia,” a young Tajik mother recently told me. There is little doubt in her mind that her household will develop via the accepted routine of labour migration to Russia.

A Russian passport can greatly help to ease the process of migration, though many Tajik people hold ambivalent feelings towards Russia

These migrant workers provide a lifeline for many of the country’s rural and urban households. Remittances enhance people’s ability to pay for healthcare and education, as well as diversify consumption patterns. For farmers suffering from a lack of liquidity, money remitted home allows for the purchase of equipment and seeds, or provides a safety net when the harvest fails. In 2013, Tajikistan ranked as the most remittance-dependent country in the world, with remittances equalling around 50% of GDP.

Under COVID-19 restrictions, labour migrant mobility to and from Russia markedly decreased in 2020, with remittances severely dwindling as a consequence. In some cases, families in Tajikistan were even forced to send money back to Russia. According to the Russian Central Bank, remittances sent to Tajikistan during the first nine months of 2020 were 30% lower than in the same period in the previous year. Signs in supermarkets stating “We don’t provide [shopping on] credit” are quite common in Dushanbe these days.

But with few opportunities at home, labour migration from Tajikistan to Russia remains resilient. However, limited returns from Russia to Tajikistan in 2020 should partially be explained by the fact that rumours started circulating in Tajikistan in summer 2020 that Tajiks without a Russian passport leaving Russia under COVID-19 restrictions could be deported and even banned from reentering the country for up to ten years. Whether this was true or simply an excuse by Tajik youth in Russia who were not eager to return home remains to be seen; it was, however, taken for granted by several families in rural Tajikistan. High travel expenses also constituted a substantial barrier for migrants to return.

Thus, a Russian passport can greatly help to ease the process of migration, though many Tajik people hold ambivalent feelings towards Russia. On one hand, they enjoy the freedom abroad and facilities that are absent in rural Tajikistan; on the other, they often experience racism and xenophobia, giving rise to resentment toward Russia. “If I have to go to Russia to assist a Chinese client, I don’t speak Russian. I try to speak English so that they do not notice my Tajik accent,” a young Tajik who works as a broker for Chinese companies told me. “If they understand I am Tajik, they will treat me with disdain.”

As a result, personal identity and legal citizenship must be set apart. Most labour migrants who have obtained Russian citizenship continue to identify as Tajik, while enjoying being exempt from having to acquire residence and work permits, as well as being included in the Russian social security system. This is one reason why elderly Tajiks, with an employment history in the Soviet Union, apply for a Russian passport nowadays – though they have no intention of leaving to work in Russia. While a Tajik pension amounts to around $10-20 per month, a Russian pension is no less than 10,000 roubles, or about $130. As one of my friends in Dushanbe jokingly put it, referring to one of her neighbours who receives a Russian pension: “That old man is now supporting his children on a monthly basis, instead of his children supporting him!”

The idea of ‘pragmatic citizenship’ captures the fact that most Tajik labour migrants would not easily identify themselves as Russian, even after many years of residence. This is seen in other migration trajectories elsewhere, where the motherland remains at the core of one’s identity, as is the case of Palestinians in Athens or Asian immigrants to Australia.

Pragmatic citizenship is employed to overcome limitations attached to one’s passport and the constraints people face at home, since, for citizens of some countries, borders are harder to cross than for citizens of others. Yet, only by crossing these very borders can this second ‘pragmatic’ citizenship be obtained, leaving Tajiks constantly split between the place they call home – but which doesn’t provide for them and their families – and another that continues to see them as foreign, yet allows them to build a better life for themselves and their loved ones back home.