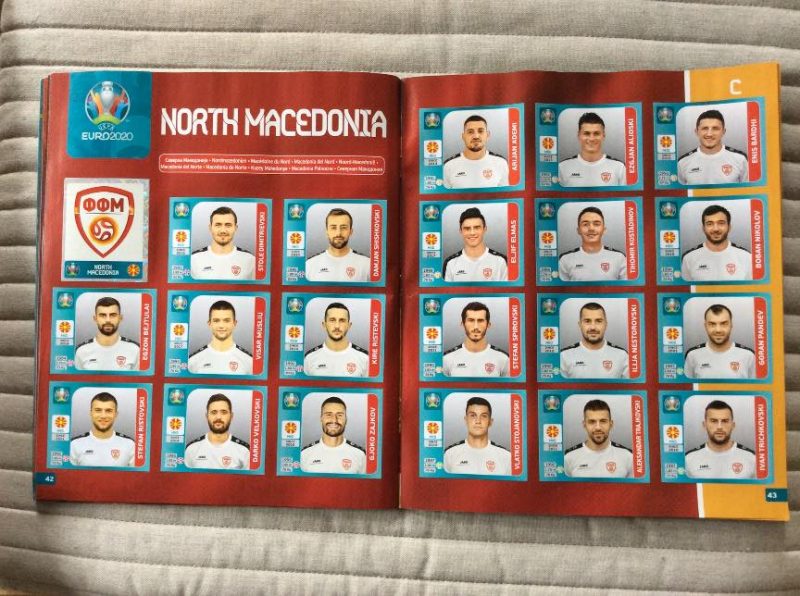 Pages with the national team of North Macedonia in the Euro 2020 sticker album. Photo: Emilija Buraliev, published with permission.

For the first time after the breakup of Yugoslavia, football stickers collectors in North Macedonia have a chance to see their national football team in a sticker book for a European championship.

Judging by the reactions on the social networks and the swarms at the stores and news stands, the most recent sticker album “Euro 2020” by the Italian publisher Panini has caused quite a sensation, building on the revelry of the Macedonian national football team's recent victories.

The sticker album is dedicated to the European football championship that was supposed to happen in 2020, but was postponed by UEFA to the 11th of June of this year because of the COVID-19 pandemic, without changing its name.

Fans queued up in front of the store waiting patiently for their chance to buy the sticker book. Skopje, 3rd of May 2021. Photo credits: Meta.mk

One Skopje resident, Emilija Buraliev, told Meta.mk how collecting stickers became a family tradition from the time when her son started playing football at the age 6. Since then, they have been collecting stickers for both UEFA Euro championship and FIFA World cup albums.

Every second year we would buy albums and managed to fill them all. The most exciting part was participating in public meetings of collectors who swapped spare stickers in the city park and in the center of Skopje near Mother Teresa monument. I had the role of the driver while my son did the exchanging. He's now 14 and stopped playing football, but we still collect the stickers – this year with special gusto, because of Macedonian participation. This year I don't expect large meetings of collectors due to the coronavirus, but we'll manage somehow – online.

The tradition of collecting and swapping the self-adhesive cards is part of the common culture in the former Yugoslavia. In the 70s and the 80s, all across the former Yugoslav federation, there was great interest in domestic stickers books, like “Životinjsko carstvo” (Animal Kingdom) from the Croatian confectionery company Kraš, in addition to the imported sticker books from Panini. There were sticker albums on a wide range of interests, from sports to comics, from TV series to educational content.

In 2006, the Macedonian computer programmer Goran Shlakeski founded the slikicki.com web site, (“slikički” is the Macedonian term for stickers). Over the years it was available in Macedonian, English and Slovene, and has become a meeting place of the online community of sticker collectors. On this not-for-profit web site, the collectors publish their collections and arrange barters.

With the advent of social networks, some of these meetings become quite huge, with hundreds of collectors gathering at the Fountain, the popular meeting point at Skopje City Park, which Global Voices reported about in 2014.

Apart from the network of news stands and other shops, the stickers “Euro 2020” can be also bought through the slikicki.mk web site, run by Dipres dooel – Skopje. The price of one sticker is 8 denars  (15 US cents), but they are sold in packs of five, for the price of 40 denars (0.77 dollars) . To fill out the sticker album, the collector has to find a total of 654 unique stickers.

The monetary value of a full sticker album is about 110 dollars, which is quite pricey for a book in North Macedonia. Collectors usually end up spending much more, as often they can't swap the spare stickers. However, they claim that the passion driving them makes the process worthwhile, particularly this time, when having their own national team in the album makes them feel they are a part of both sports and the country's history.