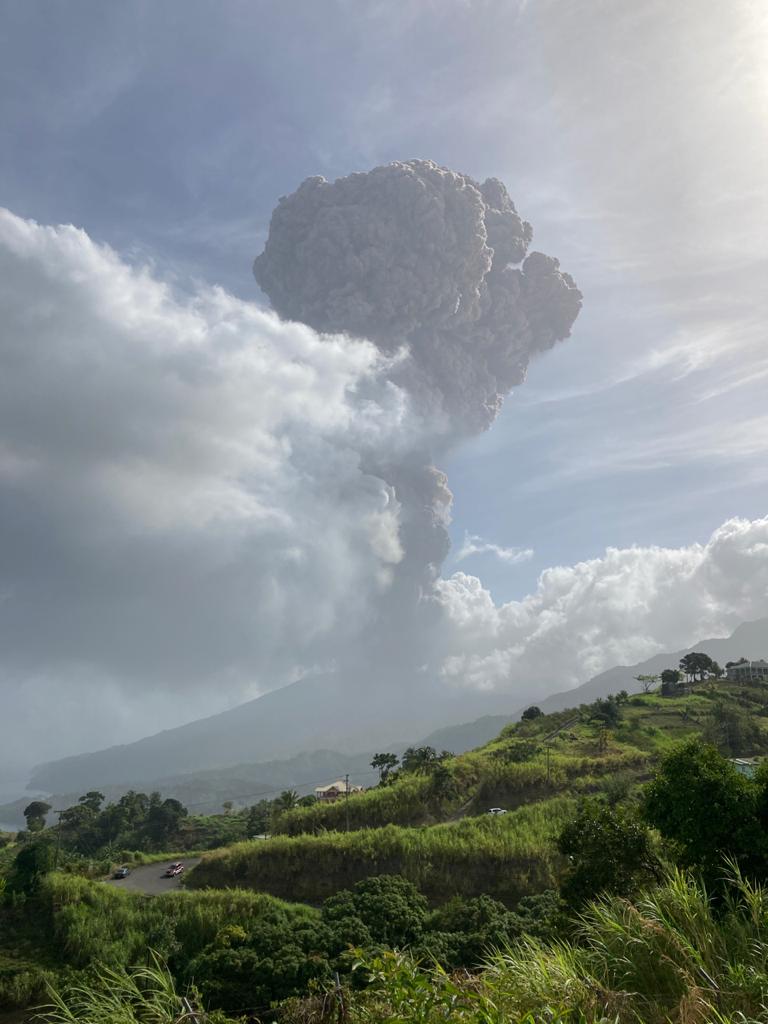 Seismic experts’ prediction that the consistent spewing and gurgling of St. Vincent and the Grenadines’ La Soufrière volcano would culminate in an eruption has come to pass.

La Soufriere has moved into an explosive state. Plumes up to eight kilometers. Ash fall expected within five minutes#svgeruption2021#

Following an emergency meeting on the afternoon of April 8, the government began to evacuate around 20,000 people living close to the volcano in the north of the island, approximately 18 per cent of the country's entire population.

As of six o'clock on the morning of April 9, NEMO confirmed that “evacuation from the Red Zone to [the] safe area” is ongoing. Evacuations have been taking place by both land and sea, with several regional territories, including St. Lucia and Barbados, offering to receive displaced people.

The University of the West Indies’ Seismic Research Centre yesterday posted a photo of the dome taken just before sunset shrouded in an ominous glow:

Latest images of the dome taken before sunset from the summit camera by @VincieRichie shows the dome now glowing and the height is now estimated to be above the southern crater wall. Follow us and @NEMOSVG for more info. #volcano #svg #lasoufrière #redalert pic.twitter.com/t498dx6fWr

The start of a new day. Long exposure photo taken by volcano seismologist Roderick Stewart at the Belmont Observatory early this morning. You can clearly see the glow from the new dome. @NEMOSVG and the Centre continues to monitor and provide updates. #lasoufrière #volcano #svg pic.twitter.com/8QfwjXlIcZ

Latest images from the summit of La Soufriere. The dome can be seen from the wharf at Chateaubelair.
Photo: UWI Seismic Research Centre.#lasoufriere #svg #redalert pic.twitter.com/8SNSNX9Vmf

Thus far, ashfall is being recorded as far as Argyle International Airport, which is located about 19.2 km away from the volcano.

Many social media users shared photos and video of the eruption while imploring others to get to safety:

Did they get everyone out of the Red Zone before La Soufrière erupted a few minutes ago???
This is simply terrifying. ?

One Twitter user noted that this eruption comes just three days prior to the 42nd anniversary of the volcano's last flare-up:

My God I need to call my dad! It’s even his birthday today -82 yrs?. My phone has gone mad. Messages. Ppl panicking – La Soufriere has erupted just shy of its 12 April 1979 anniversary when I was a toddler in St Vincent. Have mercy Lord ?? #LaSoufriere ? pic.twitter.com/CXo8dLn7iO

Even as prayers went out on social media for the people of St. Vincent and the Grenadines, some netizens were concerned about whether La Soufrière's eruption could trigger other activity in the region, a question @uwiseismic addressed in this tweet:

VT's often impact the area around the volcano. Most are shallow and small in magnitude so the impact is not far reaching. The volcanoes in the EC are not connected, they all have independent magma chambers so an eruption at one is unlikely to trigger another one.

Others attempted to predict the path of the volcano's emissions:

If a lateral eruption at La Soufriere would occur I would suspect it would follow this area to the South west instead of going straight south. There's no way to know this right now, however. pic.twitter.com/WOLKYqP1kF

One volcanologist, Dr. Jazmin Scarlett, who was praised for sharing regular updates on Twitter, noted that St. Vincent's turbulent history inspired her career path. The La Soufrière eruption of 1902 killed many Indigenous Black Caribs who had been banished by the British colonial government to live at Sandy Bay in the shadow of the volcano:

I don’t care that I don’t have a job in volcanology, this is why I became a volcanologist, to help my family and friends in St. Vincent. I’ve read and listened to what happened to my indigenous and enslaved ancestors. No one or nothing is going to stop me doing what is right.

Even today, most residents of the island's northern area have Indigenous roots. The hope with this most recent eruption, however, is that history will not repeat itself.