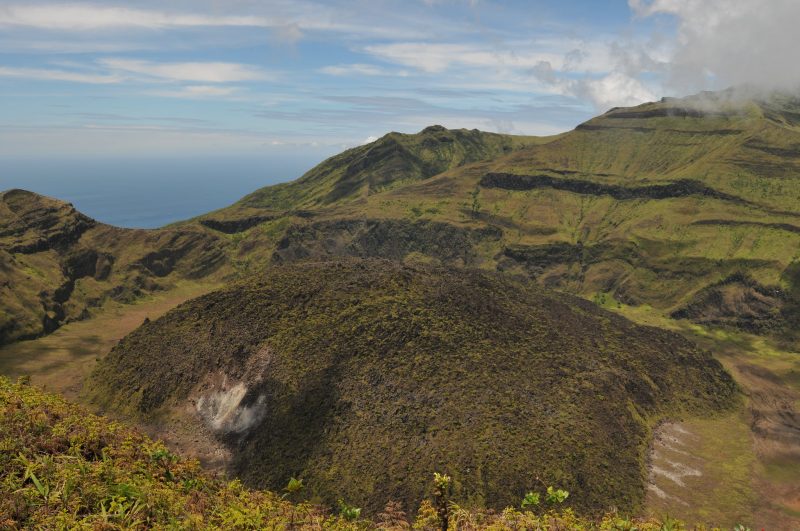 The volcano crater of St. Vincent and the Grenadines’ La Soufrière in dormant times. Photo by Dave Brown, CC BY-NC-ND 2.0.

A disaster alert has been issued in St. Vincent and the Grenadines as a result of heightened activity in La Soufrière, a volcano in the north of the island of St. Vincent and its highest point.

Categorised as an active volcano, La Soufrière's conical shape has been built up by layers upon layers of hardened lava and now, with the alert level having been elevated to Orange (the third highest of four levels), residents have been informed of the possibility of evacuation. An Orange Level alert suggests elevated seismic activity, with possible eruptions occurring with less than a day's warning:

The National Emergency Management Council has been activated as our country prepares for a possible disaster involving the La Soufriere volcano. The alert level remains orange, but we must be prepared in the event that an evacuation order is issued. pic.twitter.com/XR87nfdvZE

Some areas directly surrounding the volcano have already begun to feel its effects:

A swarm of volcano-tectonic earthquakes at the La Soufriere volcano began this morning before 7am. Several are strong enough to be felt by communities on the flanks of the volcano. We have had reports of earthquakes being felt in Fancy and Sandy Bay. pic.twitter.com/J4ISYu19pV

Trinidad and Tobago-based journalist Wesley Gibbings, who has worked extensively throughout the region, shared on Twitter:

Residents near La Soufriere #volcano in St Vincent have been asked to prepare for “evacuation at short notice” should current conditions escalate. There have recently been numerous earthquake “swarms” and, today, an increase in “steaming/smoking”.

The popular microblogging platform is the channel through which the Seismic Research Centre at the University of the West Indies and St. Vincent's National Emergency Management Office (NEMO) have been posting regular updates:

Substantial prospect of disaster. Level 3 declared by Prime Minister. NEMO boss tells residents to “be ready, get your things in order.” #lasoufriereeruption#beready

Both official sources like @uwiseismic and social media users have been posting photos and videos of the volcano's rumblings:

Early morning view of La Soufrière volcano from the Belmont Obs by @VincieRichie. The white low-lying cloud cover over the volcano and partly over the sea is due to a sustained period of volcanic gases and steam being emitted from the dome which was carried westwards by the winds pic.twitter.com/ZWCF1GAz1v

Prayers for our Caribbean brothers and sisters in #StVincent & Grenadines where #Soufriere Hills #volcano is rumbling & spewing.
???????? pic.twitter.com/cMbZ1WtooT

At the time of publishing, no evacuation order has as yet been issued, but the volcano's activity continues to be closely tracked, and several of the country's Caribbean Community (CARICOM) neighbours have already pledged to assist should there be an eruption, in which case, as many as 20,000 people may have to be immediately evacuated.

La Soufrière has erupted on several occasions in the past. Most notably, the eruption of 1902 killed many Indigenous Black Caribs, who had been banished by the British colonial government to live at Sandy Bay in the shadow of the volcano. Most modern-day residents of the island's northern area have Indigenous roots, and identify as Kalinago or Garifuna.

The most recent eruption happened in April 1979. There was no loss of life in that incident, as the country had ample warning. In November 2020, renewed activity was noted at the crater, with a seismic event being recorded in December of that year, perhaps as a result of the formation of a new dome inside the volcano. On December 27, a NASA satellite detected a hotspot in the crater.

Update: Prime Minister of St. Vincent and the Grenadines, Dr. Ralph Gonsalves this afternoon issued an evacuation order for the area around La Soufrière and all homes in the areas designated as the Red Zone on the northeast and northwest of St. Vincent. At an emergency press conference, Dr. Gonsalves said the decision was based on advice from volcanologist Professor Richard Robertson who said that the situation had deteriorated significantly.