Her death is one of many femicides, several high-profile, some unsolved 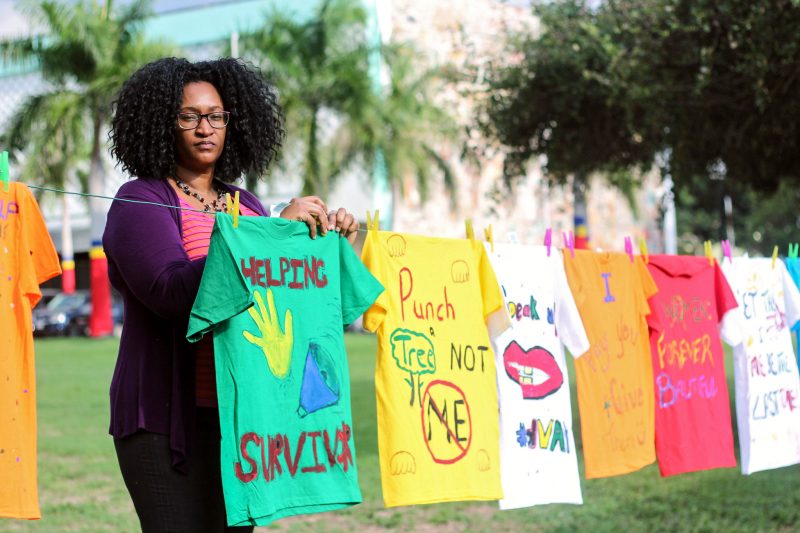 Jamaica's ‘Clothesline Project’ was part of 2016's 16 Days of Activism, symbolising the hanging of ‘dirty laundry’ in public to advocate for an end to violence against women and girls. Photo by UN Women/Khristina Godfrey, CC BY-NC-ND 2.0.

Jamaicans are anxious. Over 600 people have died from COVID-19 since the country announced its index case of the virus on March 10, 2020 and the rate of infections remains high amid lingering economic uncertainty. Then, on the eve of the first of three planned weekend lockdowns, news that a young woman had been found murdered two days after she went missing hit a raw nerve.

Police have charged a 50-year-old man, a neighbour, with the murder of 20-year-old accounting clerk Khanice Jackson, who left her suburban Kingston home on the morning of March 24, but never arrived at her workplace. The suspect would reportedly give her a lift in his car quite regularly, as their workplaces were close to each other.

News of Jackson's murder came against the backdrop of a record number of murders on the island which, according to one 2020 survey, had the highest homicide rate in Latin America and the Caribbean, at 46.5 per 100,000 people. According to police statistics, as of March 2021, there have been 328 murders, a seven per cent increase compared to the same period last year.

Both the government and the private sector are looking at several initiatives to stem the bloodshed. The National Consensus on Crime, made in October 2019, was an agreement among political leaders, civil society and the private sector, which identified specific goals, and is monitored by a private sector oversight committee—one that has expressed concern over the fact that the promised legislative action to combat crime has been too slow in materialising.

Meanwhile, netizens were overwhelmed with shock and grief over Jackson's murder. A week after she was found, the cloud of gloom had hardly lifted, especially among young women, one of whom shared her feelings of insecurity for herself and others:

Today just feel heavy from morning…cried while driving… got home and just made sad again. Hug and hold tight to the ones you love… Call them, check in…just do what you need to. A lot of people are hurting

One television station that had reported on Jackson’s case shared a widely circulated video, this time citing the disappearance of a visually impaired student, the death of a woman during a security forces raid, and the murder of a schoolgirl—all high profile cases, all unsolved:

In an effort to offer condolences, Prime Minister Andrew Holness visited Jackson's mother (who has lost her only child) and boyfriend, both of whom are calling for severe punishment for the murderer:

JUST IN: Prime Minister @andrewholnessjm in conversation moments ago with the mother & other relatives of 20 year old Khanice Jackson who was found murdered yesterday.

Many were sceptical about the gesture, however, suggesting that the Jamaican government and security forces were not doing enough:

jamaican women are not safe. the violence we endure at the hands of men is not taken seriously by a complicit government and police force. my heart goes out to Khanice’s loved ones #JusticeForKhanice pic.twitter.com/Q3pLGiHz8S

THE REAL PANDEMIC IS THE CRIME & VIOLENCE IN JAMAICA.

WE ARE NOT OK!!! OUR HEARTS ARE BLEEDING, OUR CHILDREN & WOMEN ARE NOT SAFE! This Nuh right Iyah! This nuh right. We need justice and a that we need. #JusticeForKhanice

However, while dancehall artists expressed shock at the “madness,” Prime Minister Holness was pointing fingers at the role of popular music, a regularly recurring topic on which Jamaicans seem eternally divided. Are the often violent dancehall lyrics merely a reflection of society, or are they actually influencing young people to act criminally?

When will we agree..that if we beat our children mercilessly we are teaching them that the only way to resolve conflict is with violence..that a person’s body is inviolable..that I have a right for you not to touch me..that every woman has a right to say no?

In that vein, concerns about parenting and family structures also resurfaced. Olympic medalist Shelly-Ann Fraser Pryce commented on the way that boys are raised in Jamaica:

Stop raising boys like they are entitled to women or it’s ok for them to “get away with things because they are boys.”

But why are women targeted? The perception is that many fall victim to jealous, abusive (and sometimes estranged) partners. Victim blaming after instances of femicide also surfaces from time to time. Jamaican women feel they have seen and heard it all before. Earlier this year, the women's organisation WeChange, in a newspaper op-ed, pointed to the endless cycle of outrage, promises and inaction, challenging Jamaicans to “call femicide by its name”:

When will they stop talking? When will they act? Importantly, when will we stop normalising the toxic nature of relationships and the idea that entering into a relationship means we become the property of our partners? Our society continues to cling to these harmful justifications for men's violence; from controlling women's ability to making personal choices to using jealousy to justify dangerous actions and defining gender roles in the household where the man is ‘king of the castle’.

In a heated parliamentary sitting on March 30, one Member of Parliament railed against sentencing practices. In Jamaica, convicted criminals receive a reduction in their sentence if they plead guilty (an attempt to clear a huge backlog of cases in court). Justice Minister Delroy Chuck, however, said that this practice was not appropriate in all cases and that the matter would have to be revisited.

One television station reported that the prime minister, in an interview, said that “extraordinary and emergency powers” may have to be implemented to curb crime, while respecting citizens’ rights. However, he provided no further details:

Prime Minister Andrew Holness says more States of Public Emergency and Zones of Special Operation will have to be implemented to curtail crime in Jamaica. #TVJPTN pic.twitter.com/wIvUycnqyU

Such strategies are not new—and often cause the state great expense down the line, both financially and in terms of public opinion, when commissions of enquiry are necessary to determine whether people's rights have been trampled upon.

So, how can Jamaican women defend themselves? The legalisation of pepper spray was raised by Opposition Leader Mark Golding, although it appears that its use remains contentious. A petition on the Office of the Prime Minister's website to make pepper spray legal quickly gathered signatures and will now be considered by parliament.

Even as more women go missing, many Jamaicans are publicly expressing their dismay at the crime situation.

Columnist Jean Lowrie-Chin reminded the nation of another pending case:

Meanwhile, the courts are in the process of sentencing Jermaine Miller, who is convicted of the murder of his former girlfriend, Nevia Sinclair, at her parents’ home last year. What is it about these men who will not allow a woman to go in peace if she wants to end the relationship?

Despite all the hand-wringing, genuine grief, and heightened fear, will anything change? One Jamaican woman believes that, as was the case with other victims before them, the outrage will blow over and it will be back to “normal” for most:

Tomorrow when the dust settles and the uproar quiets, we’re right back to square one. We’ll all go back to our lives, women will continue to live in fear and men will continue to be predators. We’ve been here one too many times, nothing will change. That’s heartbreaking?

This time around, it is hoped that the situation will not be “business as usual”, and that citizens and state can work together to cauterise the crime and violence, once and for all.