Online patriots have waged a war on foreign fashion brands 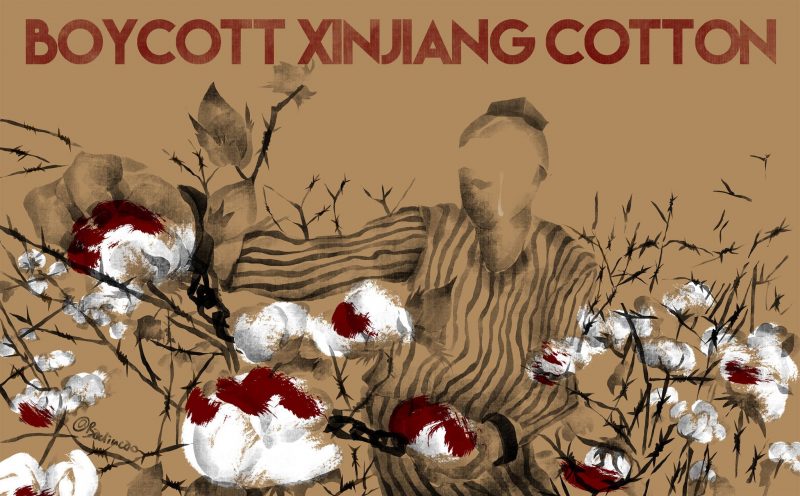 In recent years, China has witnessed waves of patriotism that have extended to the economy. Today, several foreign brands are being targeted in a fierce boycotting campaign over their decision to suspend the use of Xinjiang cotton in their products, as evidence by human rights organizations and media outlets has shown the use of Uyghur forced labour in the production chain.

In response, Beijing has mobilized its online patriots to support the use of cotton produced in this western province of China that is the homeland of the Uyghur people. Indeed Chinese authorities continue to brush off allegations of forced labour and other human rights violations as false information.

Since Chinese president Xi Jinping established ideological struggle as the key to maintaining a one-party system in 2014, it is not uncommon to see Chinese online patriots calling for boycotts of celebrities and foreign brands when they perceive them as a threat undermining China's positive image.

Here are just a few examples – in 2018, a video released by the Italian fashion brand D&G showing a Chinese model eating pizza with chopsticks was perceived as racist and triggered a severe backlash in China. In 2016, the cosmetic giant Lancôme cancelled Hong Kong singer-activist Denise Ho’s concert following an online call for boycott. In 2019, luxury brands such as Versace, Coach and Givenchy were forced to apologize over product designs which depicted Hong Kong, Macau or Taiwan as separate regions from the People's Republic of China.

The majority of the previous boycotts were motivated by a populist sentiment around the notion of Chinese “national pride” which is often constructed through an imagined image of the West as an enemy, and accompanied by expressions such as “hurting the feelings of Chinese people”.

The latest boycott campaign, however, is different from previous online uproars as it has placed China’s repressive Xinjiang policy, which is considered a political taboo for public deliberation, at the core of Chinese patriotic performance. As noted by Reuter’s correspondent Cate Cadell on Twitter,

The online boycott of Western brands refusing to use Xinjiang cotton was initiated by the Chinese Communist Youth League on March 24, as the body pointed its finger at the European fashion brand H&M, accusing the company's statement that was published in September 2020 of spreading false information about forced labour in Xinjiang.

H&M's statement was in fact in alignment with Better Cotton Initiative’s suspension of license issued to Xinjiang cotton in March 2020. This non-profit group, which promotes environment and labour standards in cotton farming, counts over 2,000 members from retailing and manufacturing industries in 27 countries. Its decision was “based on the recognition that the operating environment prevents credible assurance and licensing from being executed”.

The Chinese boycotts were eventually extended from H&M to other BCI members including Nike, Adidas, GAP, Hugo Boss, Uniqlo, and others.

The timing of the storm has raised brows among China observers. As highlighted by Ola Wong, it emerged just after coordinated sanctions were brought by the European Union, the United State, the United Kingdom and Canada against a list of Xinjiang officials who are considered being responsible for the massive arbitrary detention and severe human right violation of Uyghurs in the region:

The timing of this sudden “grassroots” reaction, led by celebrities who've been happy to take H&M money in exchange for endorsement, is down to a wave of sanctions imposed by the UK, US and EU Nike, H&M face China fury over Xinjiang cotton ‘concerns’ https://t.co/z3LN9ThL1z

The escalating tension surrounding China’s Xinjiang policy is now more likely to jeopardize the investment deal signed in December between the European Commission and China, a document which is still waiting for a final approval by Brussels. Meanwhile, the European Parliament passed a resolution expressing concern about Xinjiang forced labour in December  2020, and yet another resolution criticizing the EU-China investment deal for giving up human rights value in January of this year.

Tellingly, when the boycott campaign against foreign brands kicked off, the Chief editor of the China's Communist Party-affiliated Global Times Hu Xijin stated that:

Some members of European parliament wanted to make China ending the sanctions as a precondition to advancing China-EU investment deal. Ridiculous. The CAI [Eu-China Comprehensive Agreement on Investment] is a mutually beneficial deal, not a gift that EU grants China. Stability of Xinjiang is much more important than that deal. pic.twitter.com/96IyCz2Xdj

Since the “stability of Xinjiang is much more important than that deal”, Beijing apparently took action to push back in its wolf warrior highly assertive diplomacy style. On March 26, its foreign ministry spokeswoman Hua Chunying showed a 1968 image of prisoners working in a Texas cotton field, and referred to it as a proof of black slavery in the U.S.

As a result of the Beijing-orchestrated narrative, a dozen of popular stars have since ended their contract with foreign brands, and e-commerce platforms are also being weaponized: the majority of Chinese online shopping platforms have taken down certain Western brands, and H&M stores have vanished from online maps.

Overall, the message is very clear, as described by China Daily reporter Chen Weihua on Twitter:

Wrong phrasing. It should read: H&M and Nike should learn the lessons of trying to meddle in Chinese politics and disrespect Chinese consumers.

Media is also being activated in the campaign against Western brands with the state-funded CGTN television describing allegations of human rights violation in Xinjiang as lies. Recently, it backed its argument with an investigation conducted by a French independent reporter whose identity remains unclear, and commentaries coming from a China-based British video blogger.

The TV station also released a documentary on terrorism in Xinjiang, accusing a number of former officials and educators of being “double-face” agents who incited religious extremism and separatist thoughts through textbooks.

Regina Ip Lau Suk Yee, a pro-Beijing politician based in Hong Kong  describes allegations of genocide and forced labor in Xinjiang as lies, and tweeted photos of pretty Xinjiang actresses as evidence against allegations of physical abuse:

Look at these poor Uygur and other minority women from Xinjiang – so badly treated by the CCP – they are so skinny, nothing to eat and nothing to wear! pic.twitter.com/nz3N9QnI9s

For foreign brands relying on the Chinese consumer market, this outburst of online patriotism is a tough wake-up call: what is the appropriate choice between business interests and moral values?