'Once again, allegations of blasphemy have been weaponised' 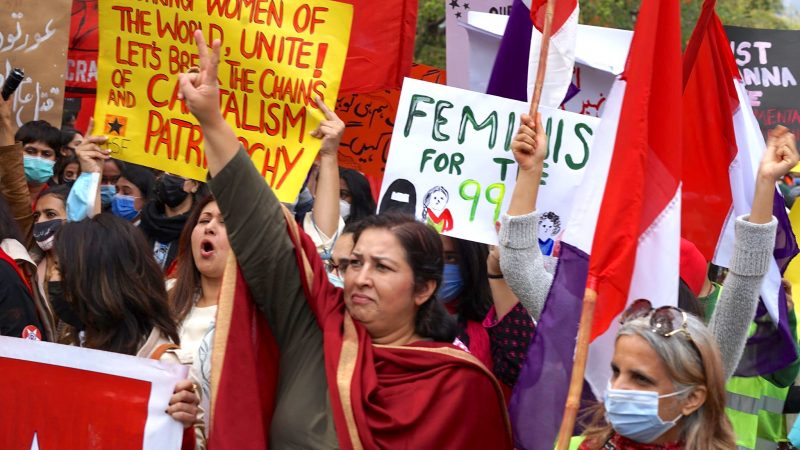 The Aurat March (Women's March) in Pakistan has faced severe resistance since it was started in 2018. This year was no different as organizers faced tough opposition in the form of disinformation campaigns, accusations of blasphemy, and even threats from the banned terrorist outfit, Tehreek-e-Taliban Pakistan.

For the fourth consecutive year, the Hum Aurtein feminist collective organised marches across Pakistan on March 8, International Women’s Day, that included public art displays and presentations to highlight challenges faced by women. The March also focused on the damage caused by the COVID-19 outbreak in Pakistan naming it a “Pandemic of Patriarchy.”

Pictures from Islamabad Aurat March showing a French flag among the placards prompted accusations that the events were part of a ‘foreign agenda'; the Women Democratic Front, responded in a tweet:

The WDF flag represents grassroots feminism in Pakistan and has nothing to do with the French flag. We, at WDF, stand against all forms of imperialism and the accusation that we would ever wave the flag of a former colonial power is ridiculous. pic.twitter.com/oZIjDB8XGu

A #Metoo blanket in Lahore featured testimonials of victims of harassment and sexual abuse, one of which said, “I was 9, he was 50. I was silenced. But his voice is still heard as he delivers the call to prayer.” This was construed as blasphemous and insulting to the Prophet Muhammad. Hashtags #Blasphemy_at_Aurat March, #BanAuratMarch went viral. Condemning the slander campaign, Aurat March tweeted:

A video from Karachi's Aurat March showing participants chanting slogans went viral with the wrong subtitles. Karachi Aurat March responded by sharing the original video and with the exact words chanted, so people could understand that they were calling for azadi (“Freedom”) from patriarchy.

Journalist Ansar Abbasi, a strong critic of the Aurat March, and known for his sexist views, also retweeted the video, spreading disinformation, and demanded the government take note. Later when it was shown to be fake, Abbasi and others tried to backtrack, but it was too late. Karachi Aurat March tweeted:

We demand @AnsarAAbbasi & @ovaismangalwala to apologize to Aurat March for spreading fake & heinous allegations. As journalists, they are responsible to verify facts & report. Apologize to women & trans women of Pakistan for attacking their movement with false propaganda. https://t.co/188dAuFvzM

The Human Rights Commission of Pakistan (HRCP) also commented on the malicious attacks:

HRCP strongly condemns the deliberate, vicious campaign against @AuratMarch, incl. by sections of the media. Once again, allegations of blasphemy have been weaponised, this time against women who bravely drew attention to the harassment & sexual assault they had experienced. 1/2

and demanded action against the perpetrators:

HRCP strongly condemns the deliberate, vicious campaign against @AuratMarch, incl. by sections of the media. Once again, allegations of blasphemy have been weaponised, this time against women who bravely drew attention to the harassment & sexual assault they had experienced. 1/2

This is not just repugnant, it is an incitement to violence. We demand that action be taken against all such persons. A mere apology is not enough. Indeed, it is a matter of great shame that such a backlash has become a recurring feature of @AuratMarch. 2/2

The organizers had arranged media passes for those who registered for the event, but some YouTube admins managed to get into the crowd and pestered and harassed the participants, asking provoking questions and forcing them to speak; they even called out names of participants who refused to comment:

We are naming and shaming the YouTube channels that harassed participants of the #AuratMarch and endangered lives with their disinformation. We will not stand on the sidelines & let lives be ruined:https://t.co/Z4lNNswEJv pic.twitter.com/aqvRNTlO8H

Aurat March Lahore released a statement condemning the lax and harmful standards of social media companies, and saying that their inaction has endangered the lives of organisers and participants of the March and damaged the feminist movement in Pakistan:

After getting a significant number of signatures, we plan to circulate these endorsed statements amongst big-tech companies. You can endorse the statement through this google form:https://t.co/ZxuWlnVEB5 pic.twitter.com/P6MBjkQIJg

A few days after the Aurat March 2021, religious groups blocked roads in the capital, Islamabad, demanding registration of the First Information Report (FIR)—a report that stems from complaints to police—against organizers and participants of the Aurat March. The administration promised action would be taken against organisers within two days.

Tehreek-e-Taliban Pakistan (TTP), a banned militant outfit responsible for many terrorist activities in Pakistan was not to be left out. It warned the marchers: “Fix your ways, there are still many young Muslims here who know how to protect Islam and the boundaries set by Allah.”

The Shuhada Foundation filed a petition in the Islamabad High Court (IHC) seeking a ban on the Aurat March, claiming that NGOs were sponsored to promote a secular Western agenda in Pakistan. The Foundation requested the court refer the matter to the Council of Islamic Ideology (CII), to examine whether women were deprived of legal rights, as the marchers were claiming, and that the Aurat March was in line with Islam and the Constitution. (The CII is a constitutional body that gives legal advice on whether any existing parts of any proposed law are repugnant to Islam.)

While Islamabad police had earlier refused to open a case because the allegations were baseless, a judge in the local court of Peshawar ordered police to start an investigation against the organisers of  Aurat March in Islamabad for blasphemy. A court in Karachi made a similar order, even though last year, the Islamabad High Court (IHC) dismissed a petition seeking to stop the Aurat March.

The Blasphemy Law carries punishment for saying or doing anything against any recognized religion, with penalties ranging from a fine to death. This part of the penal code was made harsher by including elements from Muslim Sharia law during the 1980s, making it one of the strictest anti-blasphemy laws.

Despite the threats, the Aurat March gained support from over 1,000 journalists, politicians, academics, intellectuals and activists. Special Assistant to Punjab Chief Minister, Dr Firdous Ashiq Awan, promised to support the Aurat March provided it did not “trample on Pakistan's honour,” though she later said some slogans were against the values of Pakistani society.

Meanwhile, the Minister for Religious Affairs Noorul Haq Qadri said the authorities were taking note of those who falsely vilified the Aurat March: “We will expose the culprits involved and register cases against them,” he said, adding that those who shared photoshopped Aurat March banners online will also be punished.