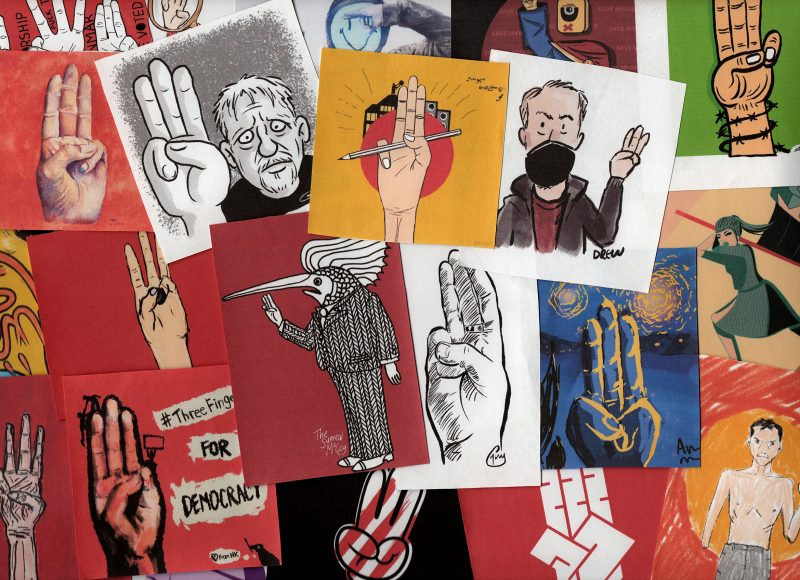 A collage of artworks featuring the three fingers icon for democracy. Photo from the Raise Three Fingers website.

A campaign named “Raise Three Fingers” has been mobilizing artists around the world to show support for Myanmar’s anti-coup protesters.

Myanmar’s armed forces grabbed power on February 1 but this is being fiercely resisted by citizens who want to pursue the country’s democratic transition. Cartoonists, poets, and other artists are among those who have braved the streets to defy the junta.

Protesters have been using the three-finger salute as a symbol of resistance. This was taken from the Hollywood film Hunger Games which was also adopted by pro-democracy protesters in Thailand.

The online page Art for Freedom (Myanmar) initially gathered 6,000 members who shared artworks like posters and graphic materials which can be freely distributed and used by protesters. Many artists incorporated the three fingers icon in their protest designs.

This led to the collaboration of Art for Freedom Myanmar, Latt Thone Chaung, and the Professional Cartoonist Organization which became the Raise Three Fingers campaign.

It enjoined artists to submit artworks featuring the three fingers icon and share these on social media. The campaign aims to promote more awareness and deliver direct support to Myanmar’s democracy movement.

Our collective influece will create mass awareness and drive urgently needed support and funding for the democracy movement in Myanmar.

A collective artwork of over 100 painters with the same heartbeat.. I’m very proud to be part of it!

Myanmar artist Nyi Maw is part of the campaign and explained the importance of the icon in a press statement issued by the organizers:

When we see somebody, and we raise three fingers, we know the movement is still alive. There is still hope.

Given the incredible unity of the people, the outpouring of art, and support that’s coming to us without anybody asking, I think we’re already winning this revolution.

Nyi Maw's statement also quoted Raven, another Myanmar artist, who highlighted the motivation of many protesters:

There are a lot of things that have been robbed from us, for over 60 years. I don’t want to go back there. I don’t want my children to be a victim of that. So I did it for myself, and for the children I haven’t even had yet.

Myanmar artist Nobel Aung wrote of the role of global solidarity in sustaining the resistance:

PEN Myanmar made an earlier appeal to fellow artists outside Myanmar:

We know that the situation must ultimately be solved by the people of Myanmar. But we call on the international community to do what they can to support us in our fight for democracy. As creative professionals from Myanmar, we call on our creative brothers and sisters across the world, and from all artistic communities, to stand up and show solidarity with us in our struggle and support those in need!

in response to @Raise3Fingers call. I intended to post yesterday but was stunned into silence. How could you shoot children and set people on fire? Inhuman!

It's hard not to lose hope. But if you do, they win.#MilkTeaAlliance #WhatsHappeningInMyanmar pic.twitter.com/tn3Oq9a9od

Indeed, many artists in Myanmar have risked their lives in challenging the junta. Many have joined the ranks of protesters aside from sharing their art as a weapon of the resistance. Campaigns like the Raise Three Fingers are a reminder of the continuing need for greater global collaboration in extending solidarity and help to Myanmar’s struggle for democracy.