The price of dissent: Women and political activism in Vietnam

There are 21 female activists currently serving a prison sentence 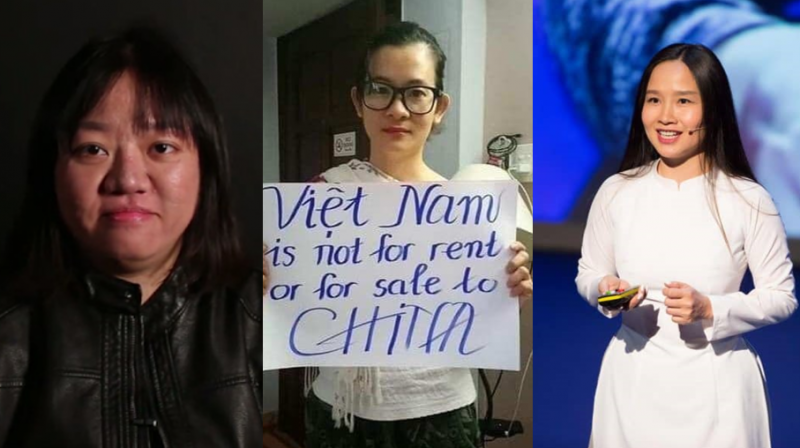 On January 20 Dinh Thi Thu Thuy became the latest female activist to be handed a prison sentence in Vietnam. Thuy, an aquaculture engineer and environmentalist from the Mekong Delta, had criticized a range of government policies on Facebook and was arrested in April last year. For just five posts that had received a mere 130 Likes and 80 Shares, Thuy was sentenced to seven years in prison. Before her trial, which lasted just four hours, Thuy had spent eight months in pre-trial detention unable to contact her family, including her 10-year-old son. Life in detention was tough. As a result of the harsh conditions of the detention facilities, Thuy developed problems with her heart and was hospitalized. Thuy is one of many brave Vietnamese women who have paid a heavy price for nothing more than expressing their opinion.

There are 241 Vietnamese activists currently imprisoned, both male and female. Thuy is one of 21 female activists serving a prison sentence, while six more are awaiting trial. Three women have been exiled from the country in exchange for early release. The 88 Project estimates that at least another 55 women remain at risk of persecution. While there are considerably more male activists than female ones, it is interesting to note that, of Vietnam’s most well-known dissidents, many are women. Blogger Nguyen Ngoc Nhu Quynh, also known in the West as “Mother Mushroom,” attracted international attention in 2017 after the US State Department awarded her with the International Woman of Courage award following her arrest one year earlier. Quynh was arrested for her online posts, which drew attention to police brutality, corruption, and the 2016 Formosa environmental disaster. Quynh received a 10-year sentence in 2017 but was released a year later and exiled to the United States.

The pop star Mai Khoi has used her platform as one of Vietnam’s most popular musicians to promote LGBT rights, feminism, and free speech. Khoi rose to fame in 2010 when she won Vietnam Television’s Song and Album of the Year but became increasingly disillusioned with the lack of artistic and political freedom in the country. In 2016, she tried, and failed, to run as an independent in the National Assembly. During Barack Obama's visit to the country in the same year, Mai Khoi met with him to discuss human rights in Vietnam. Her outspokenness attracted the attention of the authorities, and she was detained for eight hours at Hanoi airport on her return from a European tour in 2018. In 2019, Mai Khoi was the subject of an international documentary. She is now living in the US after continued harassment.

In Vietnam, politics is still dominated by men. Only one of the Politburo’s 18 members is female. Out of 200 members, there are just 19 women in the Central Committee (CC). Women fare better in the National Assembly, but real political power lies with the Politburo and the CC. The activist and journalist Pham Doan Trang told the 88 Project in 2019 that political activism is not just a struggle against dictatorship, but also a struggle against the limits of Vietnam’s patriarchal society.

Women are not only victims of the regime in terms of politics, but they are also victims of gender inequality, or self-constraint,” she explained. “Women restrain themselves in thinking that they are not suitable for a political career, that politics is for men … Thus, we should think that our fight is not only against dictatorship, or to free Vietnam from dictatorship. It is also a fight to free ourselves from our own ideological constraints, from the prejudice that we impose on ourselves.

Pham Doan Trang was arrested in October last year after years of harassment and is currently awaiting sentencing. She is charged with “conducting propaganda against the state” under Article 117 of the 2015 Penal Code. Article 117 is routinely used as a way to lock up activists who are critical of the regime.

The lack of female representation at the pinnacle of Vietnamese politics makes the contribution of female activists even more impressive. Of course, the majority of activists in Vietnam are male, but this just further emphasizes the impact that women have made. It is women like Nguyen Ngoc Nhu Quynh, Pham Doan Trang, and Mai Khoi who have brought international attention to human rights in Vietnam.

Of course, not all women have achieved the same level of international recognition for their contributions. The Communist Party (VCP) would like to keep it that way. Although freedom of expression is protected by the Constitution, criticism of the regime is not tolerated. Only five countries in the world have less press freedom than Vietnam according to Reporters without Borders. Even Iran and Saudi Arabia have a more independent press. Following last month’s 13th Party Congress that is unlikely to change any time soon.

The CC took the unusual step of re-electing the incumbent General Secretary, Nguyen Phu Trong. Trong is a conservative hardliner and has overseen an increase in repression, especially since his first re-election in 2016. Just weeks before the beginning of the Congress, three (male) members of the Independent Journalists of Vietnam received prison sentences ranging from 11 to 15 years in prison for their work. Like Pham Doan Trang, they were charged with “conducting propaganda against the state.”

In April 2020, Vietnam pressured Facebook into censoring and removing content of which the VCP disapproved. This may have been a response to the contribution of activists like Dinh Thi Thu Thuy, who had used the platform to criticise government policies. The VCP is certainly wary of the influence of social media.

Ongoing events in Myanmar are a testament to the power of social media in galvanizing and organizing political protests. The protests in Myanmar are unlikely to be replicated in Vietnam any time soon, however. In the short term at least, Vietnam’s future looks a little more predictable. The regime will continue to censor free speech and lock up dissenters. Vietnam’s female activists will continue to resist them.