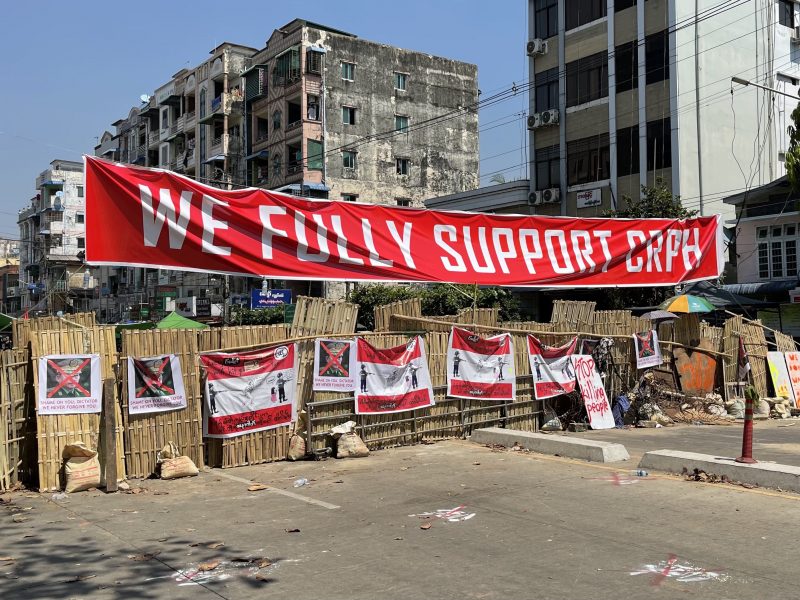 CRPH or Committee Representing Pyidaungsu Hluttaw is a body established by ousted members of parliament and other concerned citizens as a counter to the governing council of the junta. Photo by author.

This article originally appeared on Medium and was written by a blogger who doesn't wish to be identified. An edited version is published here.

The military regime of Myanmar, led by Senior General Min Aung Hlaing, continued to use its iron fist against anti-coup protestors for a second month, following its power grab on February 1.

As of March 17, 217 people had been killed and 1,872 people arrested by the security forces of the self-appointed “state administrative council.” The people of Myanmar, including local media, commonly refer to the “council” as a terrorist military regime.

The actions of the regime’s soldiers and police have been recorded by civilians and shared on social media by journalists over the first two weeks of March.

For years, we’ve documented cases of forced portering and dehumanizing acts of torture, i.e. forcing people to crawl like animals, in ethnic states. Here you appear to see both … in the city. #WhatsHappeningInMyanmar pic.twitter.com/M6zKpj45Qf

On March 3, the military committed atrocities in the central town of Monywa, where eight people were killed. Drone footage [Warning: Graphic imagery] showed soldiers carrying away bodies on the street.

A total of 38 people died across six cities on March 3. Images also showed soldiers shooting at homes. Video from Mandalay showed police beating a detained protester. At night, the military raided the head office of a funeral parlor known for its free services.

Injured protesters also died during detention. On the evening of March 6, a Muslim member of the former ruling party National League for Democracy (NLD) was arrested by the military. He died while in custody the next morning. Another video [Warning: Graphic imagery] on March 7 showed an arrested protester being attacked and dragged on the street in Mandalay by riot police.

Beginning on March 7, the military forces started to occupy civilian spaces such as hospitals and universities in several cities, including Yangon, Loikaw, Mandalay, Pathein, Pyay, Lashio and Muse. Civilians who tried to oppose the occupation were attacked.

Terrorists occupying the hospitals. Are you seeing this @WHO @WHOSEARO? The terrorist junta is doing things not even permitted in war zones.

On March 7, the military fired guns and threw stun grenades on the streets of Yangon to instil terror. Far from being afraid, residents responded by mocking the military, with some shouting “Happy New Year” from their homes after each gunshot or grenade sound, while others ignited firecrackers. Other videos spread on social media included angry, cursing people who claimed to be a military family, after the soldiers accidentally threw tear gas into their home, and a woman's recorded response when her home was shot at with slingshot by the military while she was chanting Buddhist prayers.

#HappyNewYear The civilians of Myanmar mock the gunshots at night by shouting “Happy New Year.” According to the traditional calendar, Myanmar’s new year is coming up in April. #SaveMyanmar #WhatshappeningInMyanmar pic.twitter.com/h8H0F58OQx

The death toll of protesters reached 58 at the start of the second week of March.
On March 8, many cities joined in the protests as part of International Women’s Day, with women waving their sarongs as flags.

On the evening of March 8, many protesters in a San Chaung neighbourhood were trapped as soldiers surrounded the area. Protesters were hiding inside local residents’ homes. In response to this, people from other townships in Yangon came out at night to protest, defying the curfew orders. Around 30 people were arrested.

The military regime also withdrew the licenses of five independent media agencies operating inside Myanmar on March 8. On the same day, soldiers raided the deserted offices of Myanmar Now and the next day, the offices of Mizzima and Kamayut Media. Although the staff of Mizzima was already in hiding, the editor and other staff members of Kamayut Media were arrested. The Facebook page of Kamayut Media subsequently disappeared.

There were also instances of riot police attacking religious premises. On March 8, they threw tear gas grenades inside a monastery in Yangon that tried to hide protesters. The next day, footage showed soldiers trying to break inside a mosque.

On March 9, at 1 am, soldiers raided a community-based vocational school in Yangon called Su and arrested a member of the NLD who was leading the school. He died on that day and there were signs of severe torture on his body according to his family. On the same day, protesters from the city of Myeik, who had been arrested in the morning, were released after being [Warning: Graphic imagery] tortured during detention.

On March 10, the military forces occupied the premises and housing of Yangon’s Railway staff, forcibly evicting around 1,000 civil servants and their families who were on strike. In the following days, similar evictions occurred in other cities such as Yay Nan Chaung, Hakha, Taunggyi, Thaton and Naung Cho.

On March 12, people were called out to protest at night time for the so-called 12321-day protest, referring to the date 12/03/21. Many cities joined the night protests.

A video [Warning: Graphic imagery] showed soldiers hitting three men arrested during the midnight crackdown in Yangon's Thaketa township. In response to this arrest, more people came out to surround the police station where two people from the crowd were shot dead.

On March 13, four protesters died in a crackdown in Mandalay. In Yangon, video footage showed soldiers pursuing protesters in the neighborhood of Tamwe

Between March 11–13, a total of 30 people were killed across eight cities.

Two Chinese-owned factories were also burned down during the clashes.

During that day alone, the local hospital reported 34 bodies. The death toll continued to rise in the following days.

The regime’s forces used violence across the 10 townships in Yangon. At the end of the second week, on Sunday, March 15, the death toll had reached 74, on the bloodiest day since the coup. In the second week of March alone, around 120 people died.

On the night of March 15, the regime declared martial law in Hlaing Thar Yar and Shwe Pyi Thar townships.

On March 15, martial law was extended to four more townships in Yangon. The military council ordered the blocking of mobile internet across the country. It had not been restored up to the time of writing.

The regime’s soldiers continued their operations in then-occupied Hlaing Thar Yar township amid the internet and information blackout. Several migrant workers fled the township, with most of them going back to their hometowns.

Dreadful scenes in Hlaing Thar Yar yesterday. When people went to assist the injured, they were shot too by the SAC Junta forces. #WhatsHappeningInMyanmar pic.twitter.com/AlX1oPJvTo

Twenty more people, including non-protesting passers-by, were reported to have been killed across 8 cities on March 15.

Here are some evidences how Min Aung Hlaing's terrorist groups #MyanmarMilitary burning down the people's properties, barricades and setting fire on the road. Over last few years they burned down villages in ethnic areas. Now they are committing the same atrocities. pic.twitter.com/36LzrHNCJ2

On March 17, police and soldiers attempted to remove protest barriers set up in the streets of Yangon and threatened to shoot residents if the barriers were not removed.

The anti-coup movement shows no sign of slowing down

Despite the lethal use of force and terror of the regime, protests across cities did not slow down throughout March. In addition to daily protests, people have also come out at night or even early morning, or organised prayer gatherings across cities. Hundreds of people also attended the funerals of those who were killed by the military.

The people of Taze Township from Sagaing Region who did not accept the military dictatorship, continued their collective strike on March 15, 2021 despite military brutality killed over 70 peoples yesterday.#WhatsHappeningInMyanmar#Mar15Coup pic.twitter.com/T2CXNr68Gz

Mandalay engineer group gathered and chanted for 30 minutes, stayed silent for 3 minutes to commemorate fallen protesters, marched with motorbikes and (the event was) successfully concluded.

On March 4, the Committee Representing Pyidaungsu Hluttaw (CRPH), established by ousted parliament members, waived citizens’ taxes in order to stop the flow of revenue to the military. On March 18, CRPH postponed the collection of payments for electricity and water bills until further notice.

A small number of police defecting to join the Civil Disobedience Movement (CDM) also gained traction since the beginning of March. By the second week of March, 880 police had denounced and defected from the military council. Over 400 people, mainly from police families, have also escaped to India as of March 12.

Widespread campaigns calling for social punishment on military families and supporters of the military regime were organized across cities with some funeral parlors refusing services to military families.

Hopes for the federal union

While many still expect the United Nations to invoke the Responsibility to Protect (R2P) principle leading to an intervention, there are also signs of hope of forming a united federal army made up of Ethnic Armed Organisations (EAO) in Myanmar against the military as the common enemy.

Myanmar is a Bamar Buddhist majority country with more than 135 ethnic identities living in the country. Alongside the Bamar, there are other large ethnic groups such as Kachin, Kayah, Karen, Karenni, Chin, Mon, Rakhine and Shan, most of whom have formed their own armed organisations during decades of civil war fighting for self-rule or federalism against the Bamar-centric military rule.

Generations of Myanmar military leadership have brought oppression and atrocities for non-Bamar ethnic people living in Myanmar, including the one that could be regarded as genocide against the Rohingya.

The 2008 constitution drafted by the military grants no federal status to any ethnic state. Even during the short political transition in the past decade, the parliament or Hluttaw has been largely dominated by Bamar-led major parties such as NLD and the military-backed Union Solidarity and Development Party (USDP).

Since the violent crackdown began in March, EAOs from Kayah state have vowed to protect protesters in their regions from the regime’s forces.

Similarly, another major armed organization, the Karen National Union (KNU), has stepped in to protect, or even support protesters, in the territories they control and other cities.

On March 5, the CRPH announced that its objectives are aligned with the vision of the ethnic people, namely to abolish the 2008 constitution and to form a federal democracy.

Political Objectives of CRPH
1. To end the military dictatorship.
2. Release U Win Myint, Daw Aung San Suu Kyi and all the detainees.
3. To get democracy.
4. Abolish 2008 constitution and establish a new one based on Federalism. #SupportCRPH #RejectMyanmarMilitaryCoup pic.twitter.com/Zq4xBW04QH

On the same day, the KNU also released a statement that they support the CDM and share the same objective, namely to oppose the military dictatorship.

On March 9, the CRPH appointed a temporary vice-president, who is an ethnic Karen.

Another armed organization, the KIA (Kachin Independence Army), warned that they would not stand by to watch if atrocities continued. It resumed its military engagements against the Tatmadaw (Myanmar armed forces) in March. Villagers near the fighting area have fled their homes to escape the fighting.

On March 17, the CRPH declared that it would reverse the decision of previous governments designating all EAOs as terrorists or unlawful organizations.

As of March 19, around 1,000 people have taken refuge in KNU controlled areas, including protest leaders, doctors, CDM civil servants, and soldiers and police who resigned their posts.