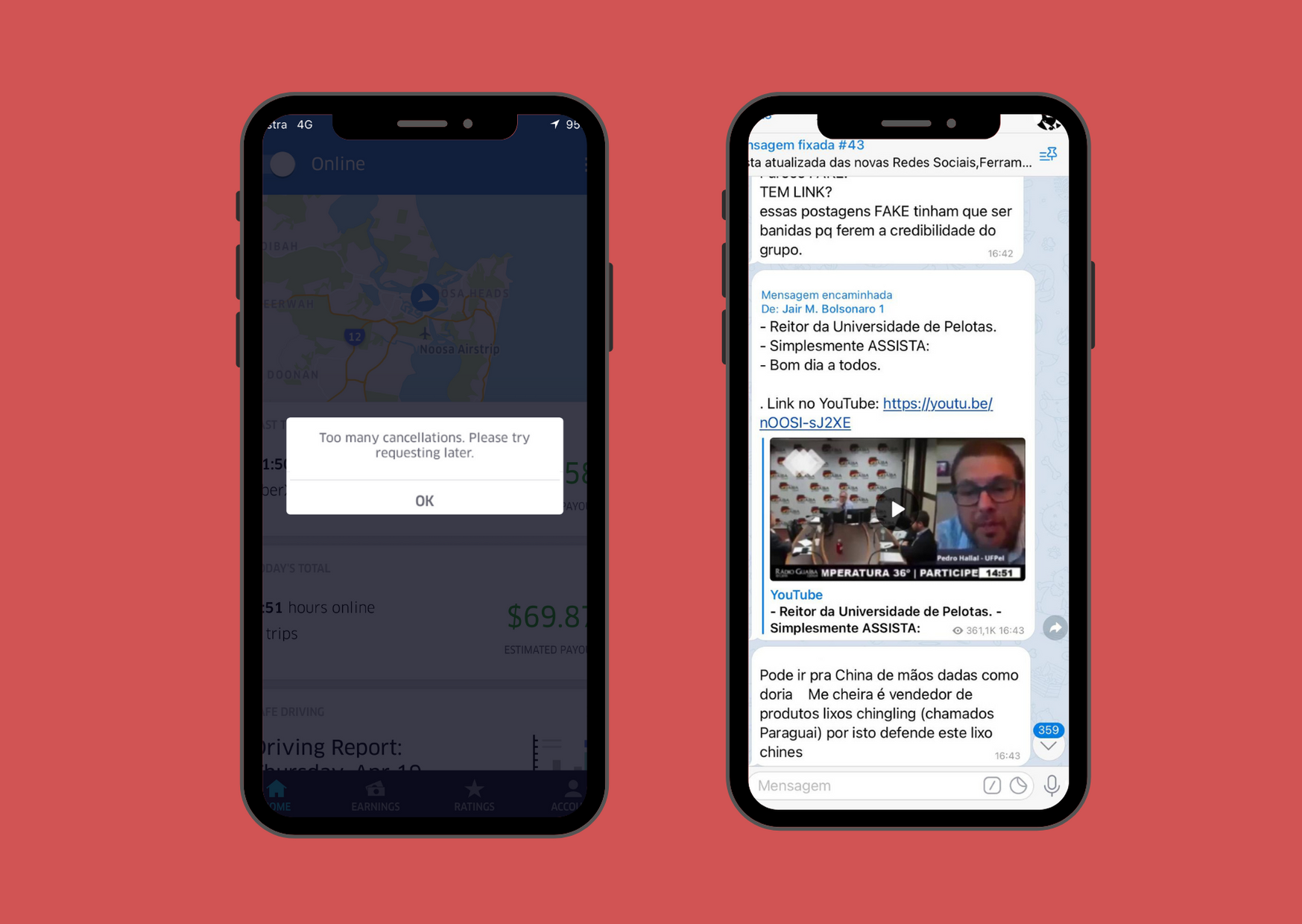 For at least two months in 2020, no driver would accept Joe's rides in São Paulo.

The son of a Chinese immigrant and a Brazilian woman, Joe (not his real name) had an Uber profile that was linked to Facebook, where his name is spelled with Chinese characters.

Before he sent a complaint to the company, a friend of his, who is also of Chinese descent, suggested he changed his name on the app. When he did — and included his mothers’ Portuguese last name — suddenly all his rides started to be accepted.

Given the historical injustice and violence perpetrated against black and indigenous people in Brazil, Asians — who make up less than 1 percent of the country's population — aren't usually acknowledged as also targets of racism.

Global Voices talked to four other people of Chinese descent in Brazil and all reported cases of racism and xenophobia in cities such as São Paulo, Rio de Janeiro, and Caibaté, in the countryside of Rio Grande do Sul state. And all said intolerance increased with the COVID-19 pandemic.

Against this backdrop is President Jair Bolsonaro, who has repeatedly blamed Beijing for the pandemic, with his son Eduardo Bolsonaro, a congressman, and Foreign Minister Ernesto Araújo taking turns to attack China.

In October 2020, the president declared the federal government would not buy Coronavac, the vaccine produced by the Chinese laboratory Sinovac, and even temporarily suspended its registration process with the national drug regulator; the president said the vaccine was unsafe “because of its origin.” And there are Brazilians who agree with him.

“Brazilians I interviewed pointed out that they voted for Bolsonaro in the 2018 presidential elections and agreed with the comments that the presidential team launched through social networks,” says Edivan Costa, an anthropologist and social scientist who researches Chinese migration to Brazil, and has done ethnographic research in São Paulo and Rio de Janeiro.

Chinese immigrants were first brought to Brazil to work in the early 19th century, when the Portuguese king, who was exiled there at that time, sought ways to get around the rise of British anti-slavery directives.

Many came from Macau — a Chinese territory that was under Portugal's control for more than 400 years — and started experimental tea crops at the Botanical Garden of Rio de Janeiro and at the Fazenda Imperial de Santa Cruz, the imperial country retreat in Brazil.

Costa says these first immigrants were often dehumanized: “Around 20 years after this first wave, Prince Dom Miguel was accused of participating in a hunt of Chinese immigrants who had been left on the outskirts Rio de Janeiro to be hunted for amusement.”

After that, there were at least three other waves of migration from mainland China, the largest of which in the 1950s — the political events that were taking place in China (the civil war, the Japanese occupation, World War II, and the Cultural Revolution) pushed many to leave. Since 2018, August 15 became the National Day of Chinese Immigration in Brazil.

Currently, the majority of Brazil's Chinese-descendant population — an estimated 250,000 people, according to 2012 data from the Chinese-Brazilian Association —  work in agriculture and commerce. Many are in the city of São Paulo, where whole neighborhoods are known for Chinese, Japanese, and Korean presence.

The Liberdade neighborhood, regarded as the epicenter of East Asian culture in São Paulo, is central in Costa's research. While conducting fieldwork, he witnessed hostility towards workers of Chinese origin. “In 2020, while I was interviewing the community, I heard a scream. I ran to see what was it and saw two boys shouting at Chinese sellers, ‘go back to China!’, ‘watch out for viruses!’ and ‘get out, Chinese!’.”

A crisis of narrative 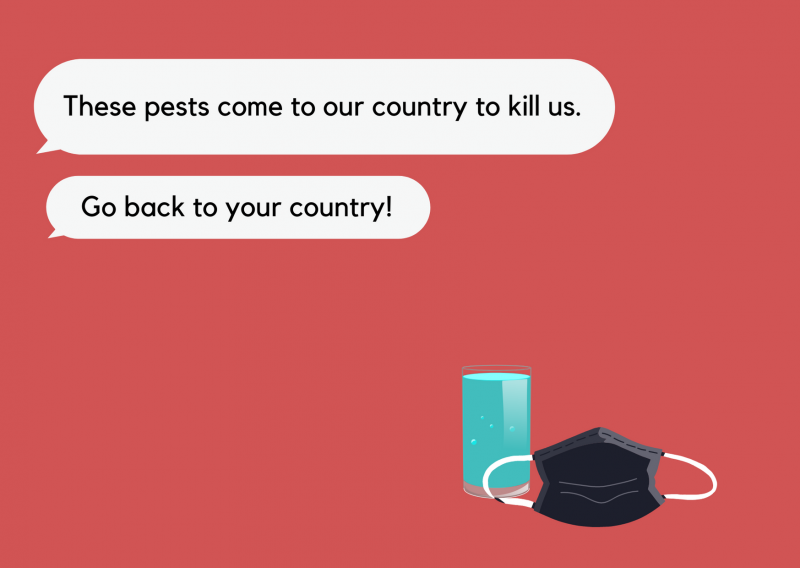 Dieqing took his mask out to drink a glass of water while waiting for his hemodialysis at a clinic in Rio de Janeiro when a man verbally abused him with racist slurs | Image: Giovana Fleck/Global Voices

“Put the fucking mask on, you piece of shit. These pests come to our country to kill us. Go back to your country, you animal”. These are some of the insults Dieqing Chen says he heard when he took his mask down to drink water at a clinic in Rio de Janeiro at the end of 2020.

Dieqing, who has been living in Brazil for over a decade, understands but doesn't speak Portuguese, so his ex-wife, Rosana Stofel, acted as a translator for him when he was interviewed by Global Voices via Facebook. Due to a health condition, he frequently visits hospitals and clinics to do hemodialysis. With the pandemic, he began to experience hostility in these environments.

“I am often one of the only patients there who is wearing a mask, and I notice that I am the most-watched one,” he says. Dieqing, who came to Brazil to work in the food sector, provides for his family in the province of Guangdong. He says he wants to go back to China as soon as possible due to the hatred environment.

In the meantime, Bolsonaro seems to be softening his anti-China hostility. In January, the drug regulator granted emergency approval to the Sinovac vaccine, and the federal government ended up purchasing 100 million doses. And in a public speech on March 23 — the day Brazil recorded more than 3,000 deaths from COVID-19 — Brazil's president attempted to show a pro-vaccine image, but distorted vaccination data and omitted his initial snub of Sinovac.

Many factors are at play here, including a downfall in the president's popularity, from 39 percent in October of 2020 to 30 percent in February 2021, and the oxygen and hospital beds crisis in the North of Brazil. Brazil also depends on China for supplies to manufacture the Sinovac vaccine in-country.

“Brazil and China currently depend economically on each other, and China is a world power that can't be belittled,” Costa says.

“We also need to consider that the Chinese government doesn't think in the short-term. Brazil is a key country in the implementation of 5G networks, for example. But the next chapters of this story will unfold around how Brazil will manage to stop the spread of COVID-19. In the meantime, the consequences of this destructive discourse are felt by the common people”, analyzes Costa.