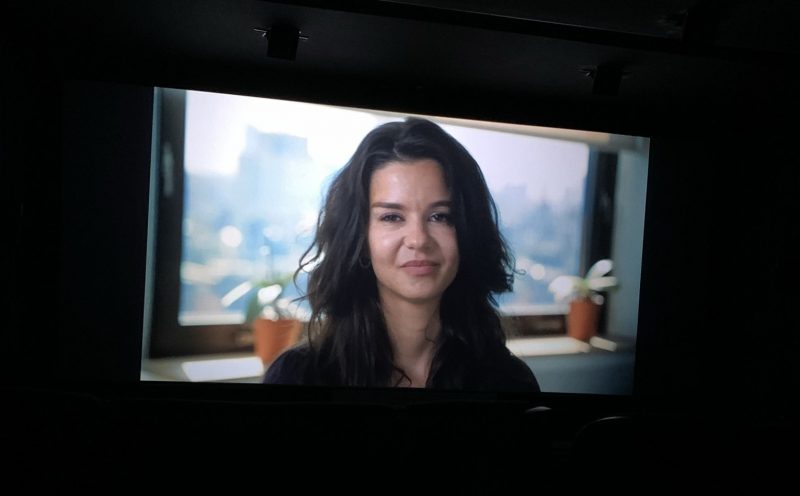 Actress and director Danijela Štajnfeld in a screenshot from”Hold me right,” her documentary about rape survivors. Image published by a fan on Twitter.

On March 22, Serbian actress Danijela Štajnfeld, 37, testified at the High Public Prosecutor's office in Belgrade that the actor, opposition politician and former government minister of culture Branislav Lečić, 65, had raped her nine years ago.

The scandal comes on the heels of a similar development that sparked a new #MeToo movement in Serbia in January, in which another actress accused director Mika Aleksić of raping her in her teens, while she was a student at his acting school.

According to Štajnfeld's testimony, 40 days after she was sexually assaulted by Lečić in 2012, she left Serbia and emigrated to the USA. During that period, Štajnfeld testified, she developed mental problems and had suicidal thoughts, and was eventually diagnosed by doctors as suffering from post-traumatic syndrome.

In 2016, the actress produced a documentary film titled “Hold me right” in which she revealed that she had been raped by a powerful man in the film industry, but did not reveal the alleged perpetrator's identity.

Hold Me Right is a #documentary which follows both survivors and perpetrators through the harrowing journey of speaking up, healing, and moving forward. Watch our new trailer below. pic.twitter.com/iMMASOzFsr

In an exchange with another user on Twitter in January, Štajnfeld revealed that she had submitted a video recording to the Public Prosecutor's office in which the man who had raped her admits his act.

On March 23, Serbian news sites published excerpts of a phone conversation between Štajnfeld and Lečić about the rape. The conversation took place several years after the incident and was secretly recorded byŠtajnfeld. The audio recording of the conversation was published by investigative TV show Insajder on March 23.

In the audio segment published by various media outlets, when the  young woman asks the man who allegedly raped her whether he remembers that she had cried and that she had not wanted to be with him, that she felt threatened, that she had said no, he replied:

I can understand, but that is a big mistake! The way I express gentleness is not an expression of disrespect, that is your achievement! That is meant to serve as honor and not to give a sense of threat. I say this sincerely. Why should I put my sexual organ into someone I don't respect? In order to humiliate this person, to underestimate it? On the contrary, I do it with a person that deserves my affection! Do you have any idea who am I?!!

In the show “Pressing” on N1 TV, Štajnfeld said that she did not report the rape because certain close friends in whom she confided implied that she might not be an innocent party. During the television interview, the actress explained that she intentionally did not reveal the name of the person who raped her in her 2016 documentary out of concern that it would shift the film's entire focus to the perpetrator.

The reason for not naming [the rapist] in the film is simple. If I tell the name of the person who did this to me, the entire focus on the film would divert to my rapist. The mission of the film “Hold me right” was to direct attention towards the experience and position of the victim.

The actress stressed that the perpetrators of rape are most often people from the victim's surroundings and whom the victim knows, respects, and trusts, which, she noted, is a fact that is hardly taken into account.

Regarding the accusations lodged against him by Štajnfeld, Lečić has said that he is prepared to report at the Prosecutor's office to answer the charges.

“I absolutely respect the laws and the legal institutions in this country and I'm ready to answer for it at the Prosecution about these accusations. It is a vicious lie that aims at discrediting me,” Lečić stated in a press release.

Stoiljković claims that she met Lečić in 2019 during the filming of the TV show “One minute until 12 o'clock”, after which the actor began stalking her.

On Twitter, Stoiljković shared screenshots of messages she received from Lečić, explaining:

Firstly, Lečić positions himself as if he is honoring you by liking you…”

“…Then he sent bunch of messages followed by almost daily phone calls. He was not at all concerned by the fact that for weeks all of his calls and messages remained without replies, and he uses primary school level pick up lines like “I need you professinally.” Bitch, please!

A charismatic actor who often played characters bent on social justice and starred in numerous hit films, TV series and on the stage, Branislav Lečić was one of the most beloved public figures of the former's Yugoslavia final decade. The initial reaction of numerous celebrities to the scandal, including some female colleagues, was to take sides. For instance, the actress Eva Ras, 80,  expressed dismay and accused the accuser of foul play against Lečić, calling the whole situation “a public lynching.” On the other hand, actress Mirjana Karanović, 65, wrote a letter to their theatre demanding that she never again be cast in a production with him.

Serbian pro-government tabloids are also having a field day gloating about an alleged rapist who is also an opposition politician. Hello! Magazin published a much-quoted article reporting that around the time of the alleged rape, Lečić was celebrating the second anniversary of his “fairy tale” marriage to TV presenter Nina Radulović, who is 31 years his junior. The marriage, Lečić's second,  ended in divorce in 2017.