Transition in Tanzania: From President Magufuli to President Hassan

Tanzanians grapple with the complexity of Magufuli’s death and legacy 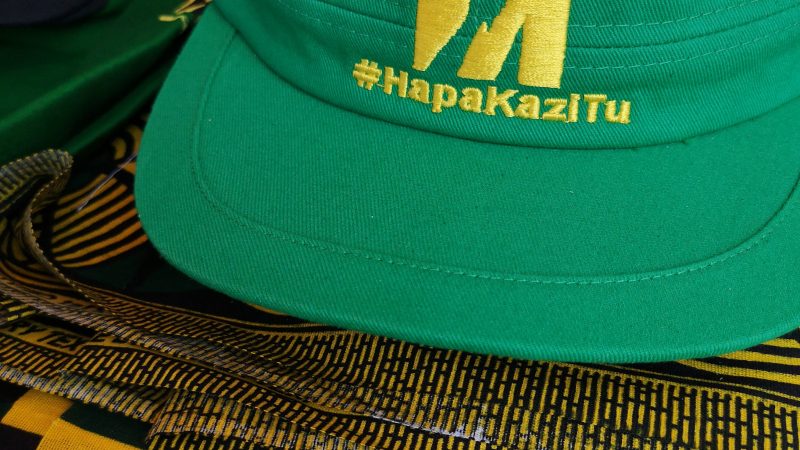 Moving Tanzania forward could not happen fast enough, when President John Magufuli took power in 2015.  “Hapa Kazi Tu,” or “Only Work Here” the slogan of the late Magufuli, seen on a green and yellow cap, featuring the colors of Magufuli's ruling CCM party. Photo by Pernille Baerendtsen, used with permission.

Across Tanzania, thousands of people are crowding into stadiums, airports, and curbsides to catch a glimpse of the late President John P. Magufuli, as his body is flown for week-long ceremonial processions in Dodoma, the capital, the islands of Zanzibar, Mwanza, and Chato, his home at Lake Victoria, where he will be laid to rest.

Magufuli was announced dead at the age of 61, on March 17, in a speech on national TV by then-Vice President Samia Suluhu Hassan, ending weeks of speculation about his health status and whereabouts. He allegedly died of a chronic heart condition:

Death announcement for the president of the United Republic of Tanzania.

Magufuli’s sudden death has, however, left Tanzanians, and others, speculating about the future of politics and power in the East African nation.

On Friday, Hassan was sworn in as the sixth president of Tanzania, making history as Tanzania’s first female president, the first president born on the semi-autonomous islands of Zanzibar, and Tanzania’s first Muslim woman serving in the top role.

Under Tanzania’s constitution, Hassan will serve the remainder of Magufuli’s five-year term through 2025.

In a short video clip, widely circulated on social media, Hassan dismisses any doubt about her ability to lead as a woman:

As Tanzanians mourn Magufuli and process this sudden shift, many have welcomed Hassan.

A very nice history of President @SuluhuSamia in 20 minutes, shared by herself [in her own words.] She says she was an “activist.” She was a public servant. Thanks Chambi for making sure I see this. Don't fail to listen.

Whereas Hassan is commonly known as a consensus-builder, calling for unity and calm during the transition, Magufuli was known as “the bulldozer,” a nickname he initially earned as Minister of Works for his efficiency in getting roads built. 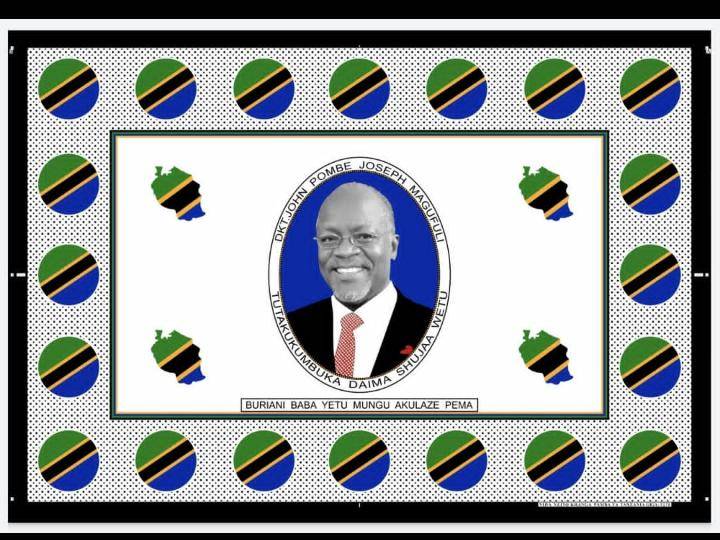 Many Tanzanians  — and Africans — are remembering Magufuli on social media for both “the bad and the good.”

The Bad and the Good of Magufuli are equally undeniable, and it means the legacy he leaves behind is complicated but also valuable. The pro-Magufuli and anti-Magufuli camps will never agree and the debate will go on for years.

Magufuli gained popularity early on in his presidency for his strong anti-corruption promise. His efforts to boost major infrastructure projects and industrialization fed into many Tanzanians’ wishes for self-reliance after decades of international aid dependency.

Last April, for example, Magufuli rejected a $10 billion loan (United States dollars) from China for a proposed mega-port project in Dar es Salaam, saying “only a drunkard would accept these terms.” 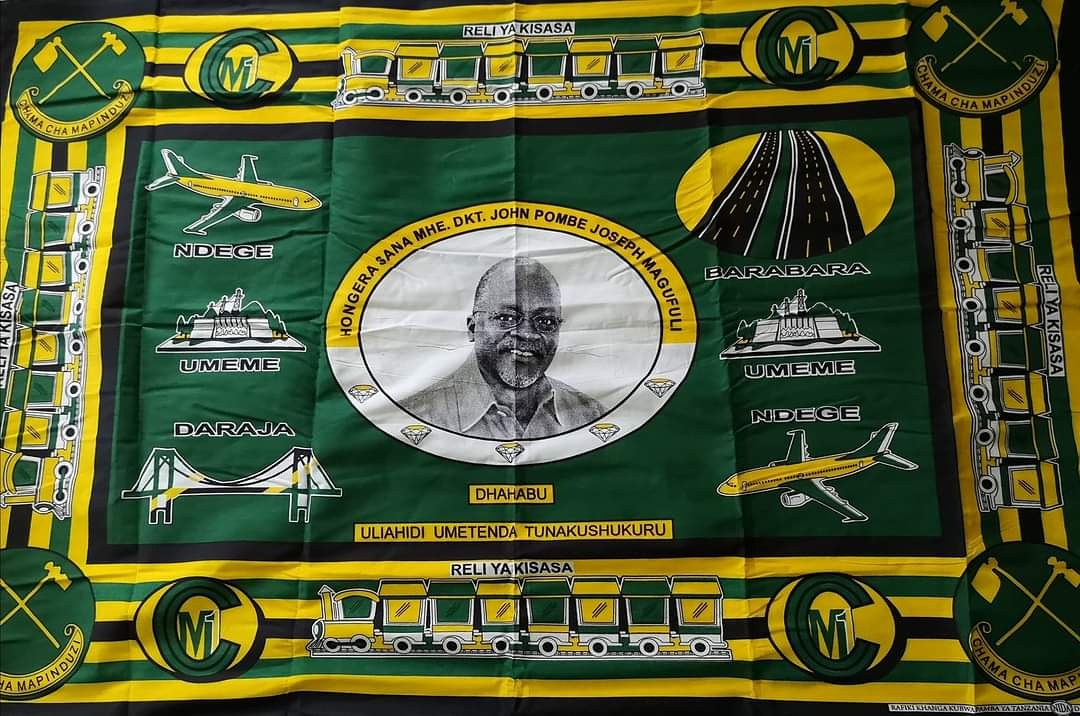 This kanga promoted President Magufuli ahead of last year's elections. It reads: “Uliahidi Umetenda Tunatushukuru,” in Swahili, or “You promised, you delivered, we thank you,” in English. It illustrates Magufuli's achievements road construction (barabara), plane (ndege), bridges (daraja) and modern train (reli ya kisasa). Photo by Pernille Baerendtsen, used with permission.

His anti-corruption focus also appealed to Western audiences, and the media initially covered his ideas positively.

To some, Magufuli is remembered as a “true African statesman” and pan-African putting Africa first. Others remember him as a “populist” president who promoted nationalism above all else:

Been watching Tanzania mourning John #Magufuli. We denounced his autocratic ways, populism & sneered at his unscientific bent, but clearly, with the man and woman on the street, the fellow was quite popular. https://t.co/KOZ15oBK4o

However, Magufuli applied an authoritarian-style rule during which human rights and free speech increasingly suffered.

Over the last six years, Human Rights Watch, Amnesty International, Committee to Protect Journalists, Global Voices and others have steadily tracked the deterioration of the civil and human rights protections.

When parliament in January 2019 debated the Political Parties Act, leading to a restriction of opposition parties, it was interpreted as a bad omen when an owl entered parliament.

Magufuli’s administration often used legislation like Electronic and Postal Communication (Online Content) (EPOCA), or the Cybercrimes Act to clamp down on opposition voices and public dissent. Amended regulations in 2020 prohibited citizens from sharing public information “that may cause public chaos or disorder” and “content with information about an outbreak of a deadly or contagious disease” without the government approval from top officials.

And during the two-week period of wild speculation about Magufuli’s whereabouts and health status in early March, at least four people were reportedly arrested for tweeting about the ill president.

Magufuli reportedly died of heart complications — an issue for which he had been receiving treatment for 10 years. But Magufuli’s sudden death left many wondering if he had perhaps succumbed to COVID-19.

To many — not the least, Western audiences — Magufuli will be remembered for his COVID-19 denial.

Tanzania did initially impose restrictions and guidelines to curb the spread of the virus, but Magufuli repeatedly denounced lockdowns as a greater threat to the economy than the virus.

He actively rebuked international guidance on public health protocols like wearing masks, social distancing and vaccines — urging citizens to use prayer and herbal remedies instead.

After Magufuli halted the publication of COVID-19 data last year in April, he then insisted COVID-19 had been fended off by prayer. Soon after, he declared Tanzania “COVID-19 free.”

Though it is impossible to say exactly how COVID-19 has affected Tanzania, it did not go away.

When a new COVID-19 wave reemerged in January, many Tanzanians shared testimonies on social media of becoming ill with COVID-19-like symptoms. Knowing that it could be punishable to discuss COVID-19, people wrote nimonia mpya or “the new pneumonia” and “breathing problems.”

But Magufuli doubled down with his anti-vaccination stance in a speech from his home in Chato, on January 27:

This was a major departure from Magufuli's predecessor, President Jakaya Kikwete, who served as global ambassador for immunization in early 2016.

Several high-ranking officials from the political elite and close to Magufuli have also died of the disease.

As throngs of people continue to gather to pay their respects to the late president, his death has also brought some relief.

Shortly after Magufuli’s death, writer Elsie Eyakuze came forward on social media to speak openly about what it was like to live through the pandemic in Tanzania, with a president who showed willful disregard for the coronavirus.

Now. For the real story I have been at a loss to tell for too long. #thread.
In March of 2020, the Covid19 pandemic started to rampage throughout the world. It did not spare Tanzania. But in April of 2020 we stopped all public efforts to halt is spread in the country.

In one of her last tweets, she asks:

“Did he die of Covid19, tho”. Yes, he did. And him, and her. And them. Tanzanians. And beyond. But they are not who you want to talk about is it? They are not The Story.

In an open letter to Magufuli, Eyakuze points out the inconsistency of Magufuli's ideas, but also applies the empathy Magufuli himself seemed to lack, at times — and forgives him.

Tanzanians are coming to terms with the complexity and gravity of Magufuli’s death and the legacy he left behind — with a close eye on the future.