'All they need is love without judgement or prejudice' 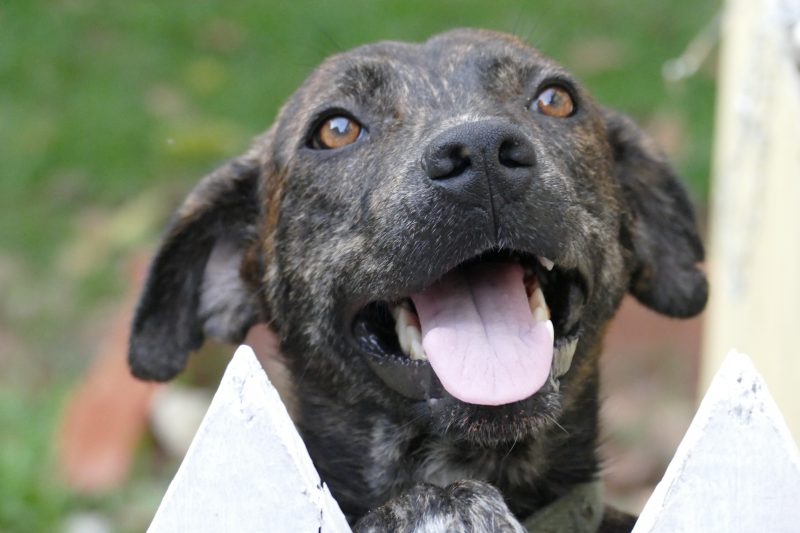 Topaz, who was rescued in Tobago in 2020 has since been adopted by a Massachusetts-based dog lover who has rehomed two other dogs from the island. Jamaica's terriers look very similar. Photo by Elspeth Duncan, used with permission.

Warning: This post contains some disturbing images of emaciated and abused street animals before they were rehabilitated and rehomed.

On March 13, Jamaican news crews descended on Montego Bay's Sangster International Airport as 144 passengers boarded a special charter flight bound for Canada. The travellers, who didn't need passports or visas, were rescued Jamaican Brown Terriers—street dogs—on their way to a new life. The Montego Bay Animal Haven (MBAH), in partnership with the Canadian organisation Save Our Scruff, organised the rehoming of the dogs.

While most netizens seemed to welcome the “feel good” news about the terrier travel event, there were also social media memes and tongue-in-cheek commentary comparing the dogs’ hassle-free relocation to the challenges many Jamaicans encounter when seeking visas.

Most importantly, however, the overseas adoptions focused the spotlight on the plight of street animals. MABH founder Tammy Browne believes that Jamaica's colonial animal cruelty laws are in serious need of updating. She recently tweeted about one of many sad cases:

Safe!!! Thanks to Kingston animal angels, we need to update the animal cruelty laws in Jamaica @AndrewHolnessJM pic.twitter.com/vXbywXie28

The MBAH had simply run out of space, unable to keep up with the number of street animals in need of care because of the neglect (wilful or otherwise) of dogs, in particular. Because the rescue centre does not euthanise animals but relies on adoptions, it had to find other alternatives, so it set its sights abroad.

It turned out to be quite an undertaking, but with support from a dedicated band of volunteers, several local companies, and the government veterinarian, they got the job done.

In a Facebook post, the MBAH noted that it was “heartening to see the responses from the business community, and Jamaicans from all walks of life, to the first ‘mass migration’ of dogs” from the country:

This group of travellers is not made up of specially-reared pure-bred dogs. Far from it. They have all come from desperate situations on the streets of our nation. They are the injured, the abused, the traumatized, the starving, the neglected, the forgotten — the ones covered in mange and eaten away by maggots. […] We heal their wounds, both the physical and the emotional ones, and we take the time to teach them to trust humans again.

We give them dignity. Royal Caribbean Terriers — not mongrels.

We find them forever homes.

We are so proud of them and we hope that this has been a real eye-opener and game-changer for all those Jamaicans who have been accustomed to treat dogs with cruelty rather than kindness, and who have seen them only as something to bark when strangers arrive. 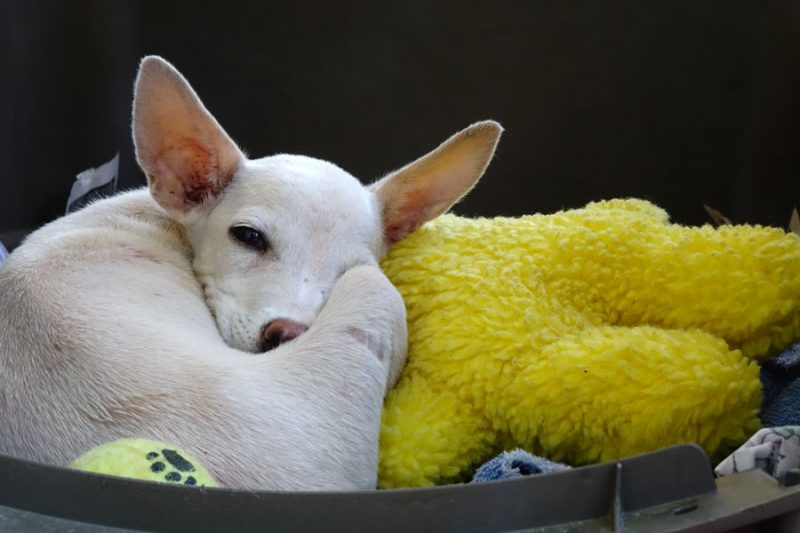 Muri, the first Tobago rescue to be rehomed abroad by the NGO Venus: Doggess of Love. Photo courtesy Elspeth Duncan, used with permission.

Though this is likely the largest ever shipment of rescue dogs from the region, it is not the first time that Caribbean mongrels have been rehomed abroad. Elspeth Duncan, founder of the Tobago-based non-governmental organisation Venus: Doggess of Love, has been relocating rescue dogs to homes in other countries since 2016. Her first pup to travel cross-country was Muri, a “Tobago Terrier” who found her forever home in Massachusetts, in the United States. She estimates that she has since helped rehome as many as 30 dogs and a couple of cats to families based abroad, from the United States to Europe.

In a telephone interview with Global Voices, Duncan said that animal lovers in the Global North find these dogs intelligent, loving and resilient, seamlessly adapting to new climates and new ways of life. Duncan's NGO was recently contacted by a Canada-based animal rescue that had room for up to 40 dogs, but with Trinidad and Tobago's current COVID-19 travel restrictions, it was both difficult and prohibitively expensive to get the dogs out.

The cost for sending one dog abroad, inclusive of the charges for airfare, holding crate and necessary shots, can range from 5,000 to 10,000+ Trinidad and Tobago dollars (735 to 1,500 United States dollars), depending on the destination and required processes. Travel costs from Jamaica, to the north of the Caribbean archipelago, would likely be less expensive.

Duncan has encountered attitudes to animals that are similar to the ones the MABH describes. In Tobago, she says, so-called “brown dogs” are so common that they tend to be overlooked, and the culture is one in which pets are perceived to be nothing more than workhorses. “Dogs have to keep people away,” she explains, “cats must catch rats in order to be worth their keep. Animals are typically not seen as companions.” 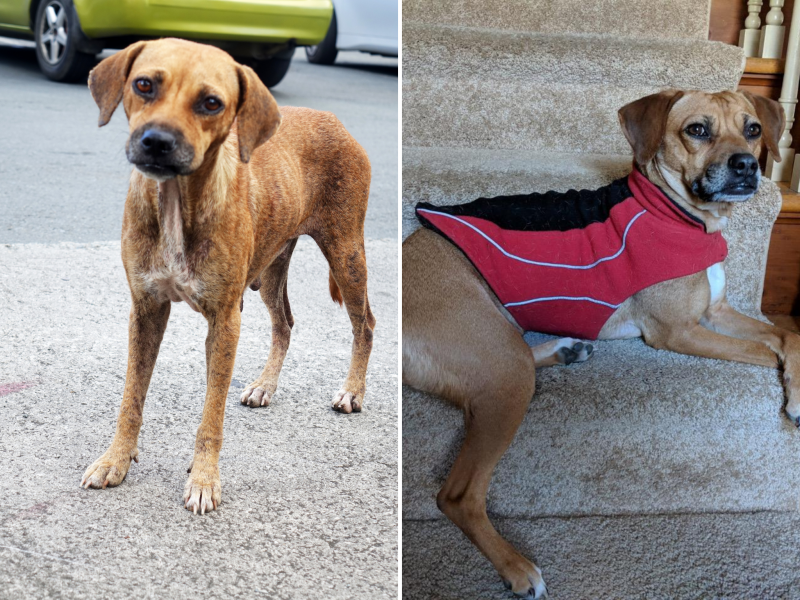 Before and after photos of Bonnie, a “Tobago Terrier” that Elspeth Duncan fostered after she witnessed the dog's distress at having her puppy stolen from her on the streets. Bonnie now lives in New England, where she has won awards in agility and recently completed an extensive dog training course. Photos courtesy Duncan, used with permission.

This is a key aspect of changing the prevailing attitude towards mixed-breed dogs and strays in the Caribbean. Duncan finds it fascinating that every time she features a foreign adoption on the Venus: Doggess of Love Facebook page, so many people express love and admiration for the same dogs that, had they passed them on the street, may not have even noticed them.

“I often think,” she tells us, “that what people see in those photos is more than the great life these animals now have. It's the soul connection they have with their humans. Unless we can see animals as fellow souls as these people do, then our animal culture is not going to change.”

As one Jamaican Twitter user noted, acknowledging Jamaica's large stray dog population and the many instances of animal abuse:

Jamaican brown dog has it rough for the most part, but they're still loyal and trainable with plenty of potential just like their counterparts — all they need is love without judgement or prejudice. (There is a people parallel message here too.)

Meanwhile, some of the Jamaican dogs that have settled into their new homes now have their own Instagram pages. Back home, the appeal of rescue dogs may well be on the rise. There are already several Jamaicans whose beloved pets are local rescues, including a fashion designer and a popular radio deejay.

However, the local landscape remains charged. In November 2020, for instance, there was a high-profile case of a young boy being seriously injured in a dog attack. Although the dogs in question allegedly belonged to someone in the boy's community, the attack happened in a public space, possibly affecting people's perception of street dogs.

Around the same time, the Jamaican parliament passed the Dogs (Liability for Attacks) Act, with the Ministry of Justice seizing the opportunity to remind Jamaicans that they should keep their dogs under control.

Regionally, efforts to educate people about animal rights and the mutual benefits of keeping them as pets continue.

Trinidad and Tobago animal lover Christine Francois, for example, recently launched the Tall Tails podcast, which focuses on animals rights and the benefits of pet companionship, and Elspeth Duncan made an award-winning short film, Venus and Magnet, which told the story of an inter-species friendship. To her, it's just another manifestation of Venus: Doggess of Love's motto—love changes lives.