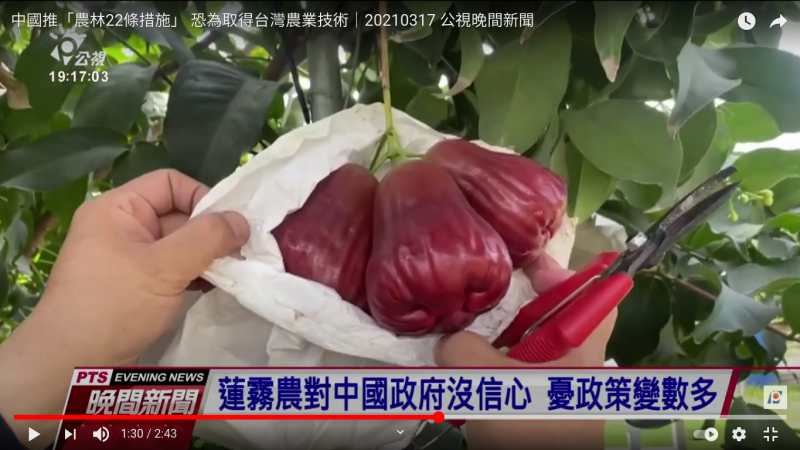 After banning the importation of pineapples from Taiwan on February 26, Beijing has now offered incentives to the Taiwanese agriculture and forestry sectors to invest in rural tourism and plant high-end commercial crops such as tea, fruit and flowers across the strait in China.

On March 17, Beijing announced 22 measures which included access to use agricultural and forestry land in China for Taiwanese agricultural businesses. The package also includes financing support, economic subsidies and infrastructure backup for their investment in China.

In response to such a favorable offer, however, Taiwan's Ministry of Foreign Affairs said it was a trick:

#Beijing just unveiled 22 measures to attract #Taiwan investment in #China‘s advanced agriculture development. They banned our #FreedomPineapple, now they think they can uproot our agriculture sector. Sound familiar? This old trick won't fool us. We're not dumb nor crazy. JW

In response to the concerns, the Taiwan Council of Agriculture (COA) said it would submit a draft amendment to the Plant Variety and Plant Seed Act by June to prevent the outflow of endemic fruits, cultivars, and agricultural technologies, to China.

Beijing’s abrupt ban on the import of Taiwanese pineapples at the end of February has compelled many to reflect upon Taiwan's agricultural policy.

Professor Chen Shih-shiung, president of the Association of Taiwan Organic Agriculture Promotion told a reporter from Liberty Times that in the past three decades, in particular, during the period between 2008-2016 when the Kuomintang’s Ma Ying-jeou was in the presidential office, Taiwan's agricultural sector had transferred more than 2,500 species of agricultural products including fruits, flowers, 800 patented agricultural technologies and farming and aquaculture skills, to China’s Fujian province. A similar transfer of planting skills and technologies has also taken place in other Chinese provinces and eventually, China had taken over Taiwan’s agricultural export in overseas markets such as Japan.

After Ma took office in 2008, he promoted closer economic cooperation with China. Before Taiwan signed the Cross-Straits Economic Cooperation Framework Agreement with China in 2010, experts from the agricultural sector had already fathomed its adverse impact on the sector. For example, professor Yang Ping-shih, former dean of the College of Bioresources and Agriculture of the National Taiwan University, predicted that the agreement would escalate the trade deficit between Taiwan and China, as land and labour costs in China were much cheaper.

Yang cited the transfer of eel aquaculture skills as an example and pointed out that China had beaten Taiwan within 10 years after Taiwan fishermen had started investing in eel aquaculture in mainland China in early 1990. By 2008, Taiwan had imported 760,000 U.S. dollars worth of eels from China, while its own exports to China in the same year were down to zero.

The story of eel aquaculture was repeated in the past decade. Chang Chin-I, deputy director of the Fisheries Research Institute said that upon spending a decade of research on giant groupers, the institute eventually succeeded in breeding the species in 1997. However, in 2008, the government allowed the Taiwan aquaculture sector to invest in giant grouper farms in China and by 2012 China’s output on the new grouper species had outnumbered Taiwan and dominated the market.

In the past two decades, Taiwanese skills in the cultivation of golden pineapples, yellow guava, wax apples, sugar apples, mangoes and butterfly orchids have also been transferred to mainland China and eventually, the Chinese version of the fruit and flora have flooded the market at much cheaper prices.

Against such a background, although the 22 measures cover a wide range of benefits to attract the Taiwanese agricultural businesses to expand their investment in mainland China, the sector remains cautious. Huang Wen-hong, a Taiwansese businessman who had the experience of running a farm in Fujian told independent online media News Market he was skeptical of Beijing’s policy,

It is true that the Chinese government will give you a huge piece of land, but you have to invest a big sum of money to improve the land quality. Then they will learn your skill and you will soon lose your value … they could change its policy whenever they feel like. They could make up excuses to take back the land or even cut your water and electricity supply.

As the Taiwanese government has started strengthening its law against the outflow of endemic agricultural products and technologies to China, it appears the Taiwanese agricultural sector will likely reduce its reliance on the Chinese market and diversify its overseas market.