Protesters never seem to run out of ideas, or audacity 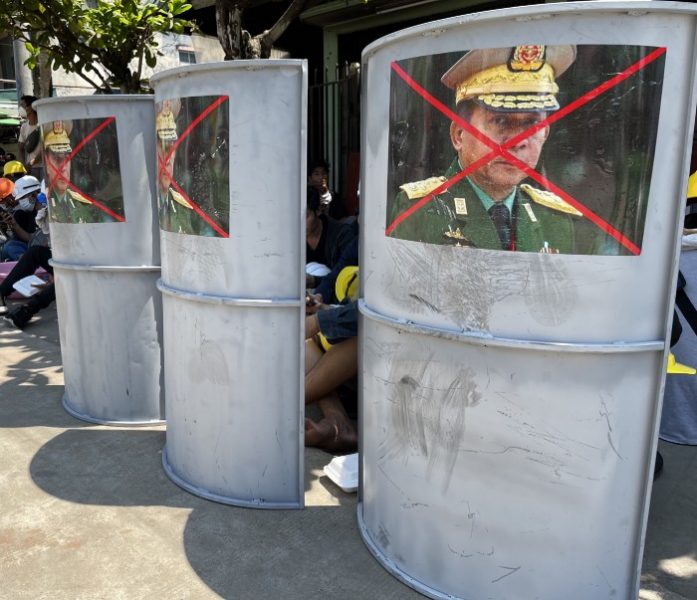 Shields made by anti-coup activists and used on the frontlines of protests. They featured the image of Senior General Min Aung Hlaing to discourage security forces from attacking protesters. Photo by author.

This edited article originally appeared on the blog of a Global Voices contributor who doesn't wish to be identified.

The death toll of Myanmar's protesters had already reached more than 217 by Wednesday, March 17 as the military ramped up its violent crackdown on the anti-coup resistance.

The Myanmar military, led by Senior General Min Aung Hlaing, staged a coup on February 1 and replaced the civilian government with a “military council,” having accused elected leaders of the National League for Democracy of committing massive fraud in the November 2020 election.

READ MORE: Coup and resistance in Myanmar: A timeline of the first month under the 2021 military junta

The military has been conducting nightly raids and arbitrary arrests. Many people have died during these detentions from beatings and torture—acts of terror intended to instil fear. According to the Assistance Association for Political Prisoners, there were 1,873 confirmed political prisoners as of March 14.

Despite the intensified violence unleashed by security forces in recent weeks, young pro-democracy protesters continued to show no signs of fear or slowing down their peaceful protests across the country. They even came up with different physical and psychological defence strategies to deter the riot police.

In Yangon, people set up protest stations in their own neighbourhoods with makeshift defence barriers, rather than going to a massive gathering point as protesters had done in February. The barriers, made of local resources such as sandbags, large trash bins, concrete blocks, bricks and even large PVC pipes, were meant to slow down the soldiers while protesters retreated to safety.

Frontline protectors, mainly local youths, are often the first line of defence. This is a dangerous spot since their DIY shields, made of plastic, wood, or iron from recycled barrels, do not protect them from live ammunition. Wearing DIY vests and construction hats, they risk their lives to buy some time for other protesters to escape before the arrival of police and military forces. The riot police are mostly soldiers dressed in police uniforms. Many frontline protesters were violently beaten [Warning: VIOLENT IMAGERY] or tortured [GRAPHIC IMAGERY] during detention.

Tear gas bombs are defused by frontline protesters by using wet blankets and water bags that have been prepared by residents of the neighbourhood. They also use improvised gas masks, goggles, and other protective gear.

Young protesters showing defiance everywhere in Yangon. It’s clear that the fear tactics of the terrorist junta have failed to intimidate the young people, who show relentless determination to resist the military rule.

Protesters have been placing pictures of Min Aung Hlaing on the streets or on the ground in front of defence barriers based on the belief that soldiers stepping on the face of their leader could be accused of showing disrespect. This tactic aims to slow down the soldiers because they would have to remove the pictures first before attacking protesters. Some protesters put pictures of the general on their shields hoping that soldiers would not shoot directly into the face of their leader.

The tactic worked for a few days as soldiers tediously removed images of the general before advancing toward the protesters. As more crackdowns happened, the tactic has become less effective as riot police ignored the images. The footage of a soldier deliberately goose-stepping on the general's face has become viral.

In Myaung Mya and other cities people placed pictures of the general on tombs as a way to demoralize the coup leader.

ထဘီခံတပ် (“Hta-main-khan-tat”), which means “women’s sarong defence line,” draws from the superstition that male soldiers who go under a clothesline used for women’s clothes, particularly women’s sarongs (ထဘီ/hta-main) and underwear, would fall in battle.

The idea comes from the deep-rooted misogyny within Myanmar's military that regards women or women’s bodies as being inferior or impure. Myanmar's military subscribes to the patriarchal superstition that women's sarongs impair the virtue of men (ဘုန်း or “Hpone”), and thus, soldiers will lose protection in battle.

Indeed, soldiers stopped and tried to remove the clotheslines of women’s sarongs on the streets before they moved forward.

In some cities, protesters have gone as far as publicly putting Min Aung Hlaing’s pictures on women’s underwear as well as menstrual pads.

While these moves are welcomed as effective ways to slow down, people were also urged not to promote misogyny. A Twitter user pointed out that while battling against the violent military, protesters must also battle against internalized sexism.

On March 8, International Women’s Day, Myanmar women protesters marched in front of a rally holding up sarong flags to fight both the military dictatorship and society’s misogyny.

On social media, young men also posted pictures of themselves wearing women’s sarongs on their heads and holding up three fingers to symbolize their rejection of the idea about ဘုန်း (“Hpone”) or male virtue.

An activist, Aung Myo Min, wrote about the opportunity to fight both the dictatorship and misogyny.

The words that my grandma used to say when I was young now became true. She said “don’t low down on women. We will raise our hta-main (sarong) flag.”

This is the day we break down both the military dictatorship and the beliefs that sarongs are inferior and women are weak.

In some cities like Myitkyina, Nyaung Oo and Dawei, protesters picked unusual times such as five or six in the morning to avoid the riot police. Night-time prayers and protests have also been organized across the country. Some cities also tried “guerilla protests” in which protesters evaded crackdowns by showing up on different streets from where riot police were deployed.

Meanwhile, some held protests in rivers where protesters rode on boats, or in farms, while others climbed mountains to protest.

In some cities, a “peopleless protest” was done by leaving placards and other protest materials on the streets. In Mindat, a “completely silent protest” took place where nobody came out on the streets and markets were closed for the whole day.

Ethnic armed groups on the side of civilians

In some states, ethnic armed organizations (EAOs) stepped in to protect the protesters. One of the EAOs, the Karen National Union (KNU), has announced that it will protect civilians from the military.

Despite the atrocities perpetrated by the Myanmar military, protesters have not resorted to retaliation as the majority continued to uphold the non-violent principle of the movement.

However, with the alarming rise of the daily death toll of protesters, some have called for the formation of a preemptive strike force like a civil defence force to fight back against violent oppression. Since March 13, protesters in Yangon and Taunggyi have raised black flags as a sign to retaliate or strike back if violent crackdowns continue.

The Committee Representing Pyidaungsu Hluttaw, which was established by ousted elected members of parliament, announced on March 14 that protesters and civilians, in general, have the right to lawfully use other means of defence against the armed terrorists, i.e. the military.