The ‘tree of life’ that's under threat in Trinidad

Squatting and land clearance are the most pressing concerns 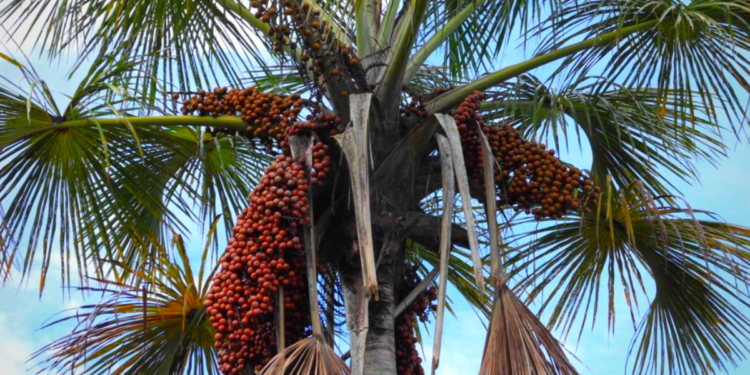 The moriche palm, also known as the “tree of life.” Photo by Linton Arneaud, used with permission.

The majestic Mauritia flexuosa, commonly called the moriche palm, was also dubbed the “tree of life” by the German naturalist and explorer Alexander von Humboldt at the beginning of the 1800s, thanks to the role it played ecologically, as a nest site for birds and a food source for both animals and humans; and socio-economically, as a source of raw materials.

Centuries later, the moriche palm still grows in several South American countries, including Guyana, Suriname, and Brazil, as well as—in somewhat of a restricted range—on the Caribbean island of Trinidad, which once formed part of the South American continent. Its local populations, however, are becoming increasingly vulnerable because of unregulated human impact.

A well-distributed species throughout the Amazon and Orinoco Basins, the palm is thought to have been brought by early civilisations from the Amazon to Trinidad, which formed the northern limit of its range. Today, naturally occurring moriche palm populations exist in only six locations in Trinidad.

They are a keystone species in the Aripo Savanna and Nariva Swamp environmentally sensitive areas where they provide important ecosystem services. Since these locations have densities of adult trees higher than 1,000 per square kilometre, the ecosystems have evolved to depend on them.

The palm is also found in the Arena and Valencia Forest Reserves, and the Erin Reserve and Los Blanquizales Lagoon along the island's south coast. The lagoon's population has fewer than 100 trees per km2, while the densities of all the other populations are fewer than 50 per km2.

Importance of the palm to human development

Because the country's economy is still heavily reliant on the energy industry, as well as the fact that its main moriche palm populations exist only in environmentally sensitive areas, the species is not cultivated for economic purposes in Trinidad. However, palms are believed to have been utilised by early human civilisations. As fire became integral to human evolution and existence, the moriche palm, believed to be pyrophilous in nature, made the species even more compatible with human settlements. Some societies still depend on these palms for their survival today.

In Peru, for instance, moriche palm ecosystems or “Aguajals” as they are called locally, comprise 1 per cent (7,000 km2) of the Amazonian valley forest and contribute millions of United States dollars to the country’s annual gross domestic product (GDP). Products made from the palms include frozen sweets, wines, oils, crafts, jewellery, footwear and toys, as well as sunscreen, deodorant and pharmaceutical items.

The Moriche Palm Diet concept, developed in Brazil, which claims to “accentuate the shape of a woman's figure naturally,” has increased commercial demand for the vitamin-rich fruit. 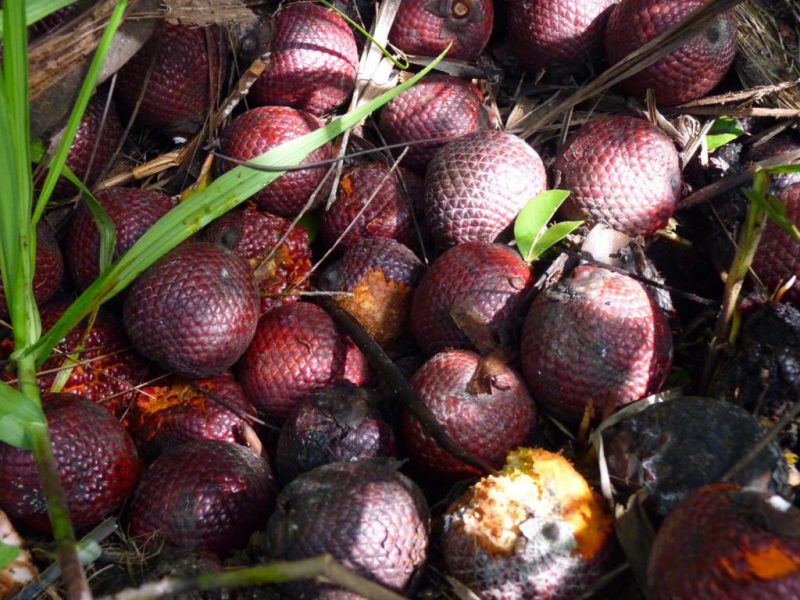 Fallen fruit from the moriche palm. Photo by Linton Arneaud, used with permission.

Humans, however, are not the only ones dependent on the palm. In Trinidad, local indicator bird species such as the fork-tailed palm swift, moriche oriole, sulphury flycatcher, and red-bellied macaw depend extensively on moriche palms to provide both food and habitat for their survival. In this way, the existence of Trinidad's moriche palms is directly related to the richness and diversity of the country's bird species.

On the ground, the red-rumped agouti hoards the moriche's fallen fruit, retrieving them during food-shortage periods. The scaly, dark red fruit is a rich source of nutrients, fats and polysaccharides, and helps ensure the survival of the agouti population during times of famine. 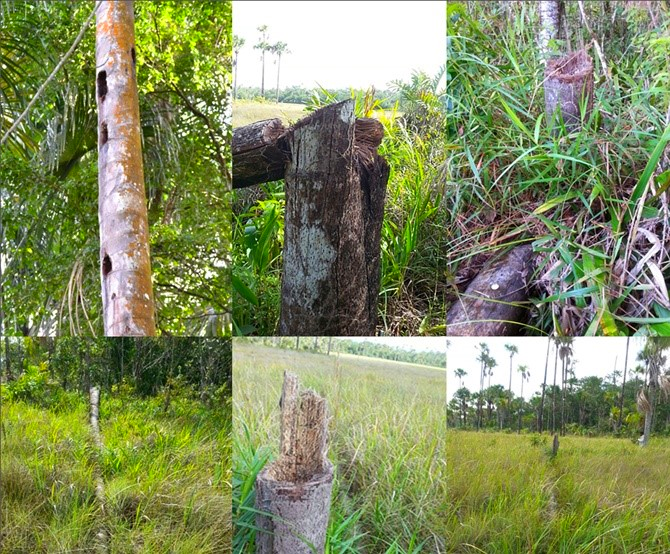 During my surveys throughout the island, I have recorded several threats to the palms, squatting and land clearance being the most serious. Of pressing concern is that the swamp and marsh forests containing moriche palms in the Aripo Savannas, Valencia Reserve and Los Blanquizales Lagoon are being cleared to build shanty houses and to acquire land.

Moriche palms are also being destroyed as a result of slash and burn farming. In the Los Blanquizales Lagoon and Valencia Reserve, for instance, palms are being cut down to propagate short-term crops like dasheen, eddoes, pumpkin, corn, cucumber and pigeon peas.

Poachers for the illegal pet trade cut down dead palms in the Aripo Savannas and the Arena Reserve to acquire red-bellied macaw chicks, destroying valuable nest sites and other palms in the process. If such threats are not addressed soon, there could be dire consequences to Trinidad's moriche palm populations, particularly within the Valencia Reserve along the east-west corridor, and Los Blanquizales Lagoon to the south of the island. 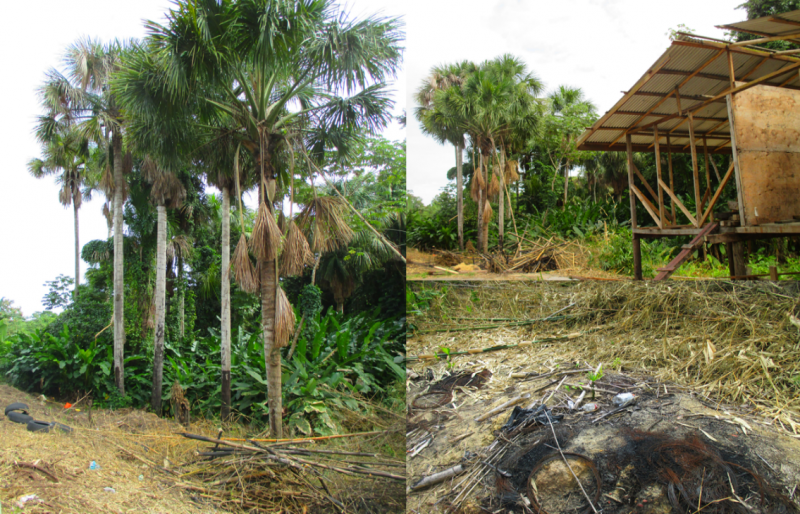 Moriche palms cut down in Los Blanquizales Lagoon along Trinidad's south coast for squatting and agriculture. Photo by Linton Arneaud, used with permission.

A small team of researchers from the University of the West Indies—Dr. Mike Oatham, Dr. Aidan Farrell and myself—are currently conducting research into the population dynamics of moriche palms in Trinidad, in the hope of addressing the existing scarcity of data.

With respect to conservation, frequent patrols by law enforcement agencies on a roster system may be part of the answer to successfully protecting moriche palms in Trinidad. However, the designation of the Los Blanquizales Lagoon as a forest reserve is long overdue.

It is also advisable for the government to partner with local communities to protect this palm species, by enlisting active organisations located near palm populations to help ensure that they are not destroyed. Several villagers and squatters living in proximity to palm stands have indicated their support for the erection of proper signage, directly in front of diminishing stands, forbidding the removal of palms. This would be both an effective and cost-efficient investment for the government.

An iconic symbol of Trinidad's natural savannahs and freshwater swamps, the moriche palm is home to many species, including several birds which nest almost exclusively in it. If properly managed and utilised in a sustainable manner as is the case in other countries, moriche populations may even have commercial applications. In Trinidad, the “tree of life” is worth saving.

Linton Arneaud holds a PhD in Environmental Biology and is the vice president of the Trinidad and Tobago Field Naturalists Club (TTFNC), a volunteer based, non-profit organisation dedicated to the study of natural history.