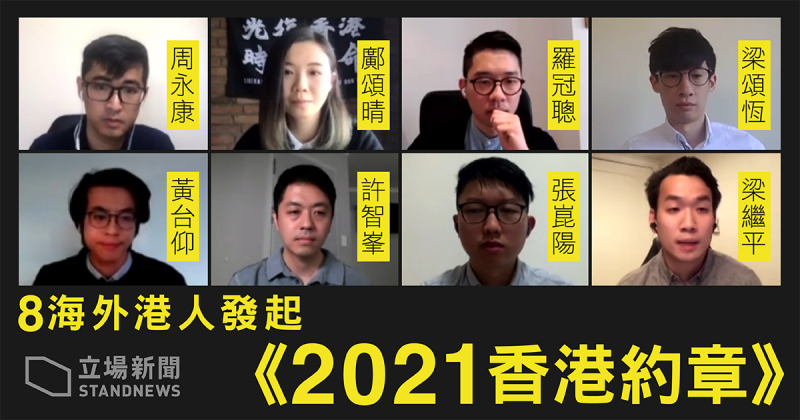 8 activists announced the 2021 Hong Kong Charter on an virtual press conference. Image from the Stand News.

This post was originally published in Chinese on the Stand News on March 15, 2021. This translation is published on Global Voices via a content-sharing agreement.

A group of eight exiled Hong Kong activists launched on 14 of March the “2021 Hong Kong Charter [2],” a pledge to continue the pro-democracy movement for Hong Kong and a framework for international advocacy work.

Against the background of China’s latest moves in arresting the majority of pro-democracy leaders [3] and rewriting election rules [4] in Hong Kong, the group — who comes from a range of pro-democracy movements — stressed the importance of building a nonpartisan front among diasporic Hongkongers.

Nathan Law, a former lawmaker who escaped from Hong Kong after the National Security Law was enacted on July 1, 2020, explained the goal of the 2021 Charter (quote [5] via William Yang on Twitter):

We are here to show solidarity and encourage people fighting against political suppression of the CCP to not give up. We also hope that our overseas community can continue to uphold Hong Kong’s basic values of democracy, freedom and our love for the city.

The charter begins with “the belief of the diasporic Hongkongers,” outlining the duty of those living overseas:

Diasporic Hongkongers shall speak what cannot be spoken in Hong Kong now, utilizing the precious freedom we have, to voice out for those silenced by the rule of terror in Hong Kong, […] stay united and not fall into the trap of internal conflicts.

The second section stresses the uniqueness of Hongkongers’ identity and their rights to determine the future and affairs of Hong Kong. It pledges to continue the international campaign for the abolition of the draconian National Security Law and for a genuinely democratic system in Hong Kong, free from China’s control.

The third section defines the abolition of the “one-party dictatorship” in China an essential step in the realization of democracy and freedom. The international Hong Kong pro-democracy movement pledges to join others against the Chinese Communist Party’s digital totalitarianism, cultural cleansing, and genocide in Inner Mongolia, Tibet, Xinjiang, and against other ethnic minorities, as well as military intimidation against Taiwan.

In its final section, it states that the Hong Kong movement will actively connect democracy, freedom, social and environmental justice advocates around the world to promote the universal values of freedom, autonomy, fairness, diversity, equality, and democracy against the expansion of totalitarian regimes.

Nathan Law sees challenges in building solidarity across the Hong Kong diaspora, as he explained in the conference:

The disaporic Hongkongers are very diverse, some left Hong Kong after 1989, some after the 2014 protests and some after the 2019 protests. Some have spent their efforts on community building, some on political lobbying, some are working in the business field. All these people have different imaginations of the future struggle in Hong Kong.

The eight initiators stressed that solidarity is crucial to sustaining the Hong Kong pro-democracy movement, and that the Charter can provide a common vision for those who will continue the struggle overseas.

Glacier Kwong, an activist now based in Germany, pointed out that the CCP political oppression is not confined to Hong Kong and hoped that the future international campaign can connect with pro-democracy struggles in other countries.

Brain Leung [6] who is now studying political science in the U.S. shared a similar view:

During the 2019 protests, Hongkongers asked the world to listen to their voices. Now we have to dialogue with the world and understand the context of people's struggles in other parts of the world.

Leung says that, in the next 10 to 20 years, the most important agenda for the Hong Kong pro-democracy movement will be to connect with international civil society, find inspiration from each other, and contribute to policymaking in other countries.

Alex Chow, who is studying urban geography in the U.S., says that overseas Hongkongers must engage in a variety of global struggles, including environmental justice and human rights, and lobby other countries to change diplomatic relations with China. He says that the Hong Kong story will not be a tragedy as long as people continue their struggle:

Hongkongers, whether in Hong Kong or overseas, are capable of overriding the script written by the state and instead write their own story.