'The stories behind the images need to be told and explained' 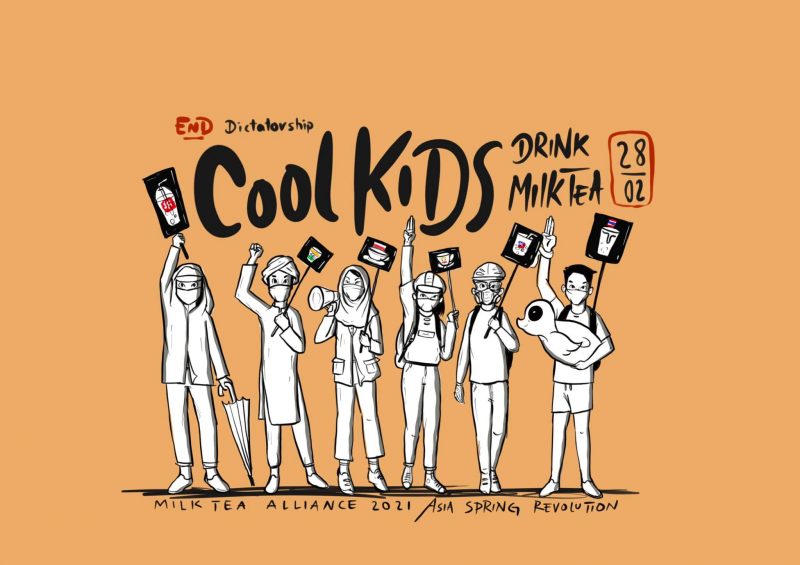 Image from Yangon.design. Free use.

“I have made a lot of friends, both young and [old]. Most of them are active on Facebook, where they post about their life and news about Myanmar,” Crox told me via email. During the pandemic, he started learning Burmese, which led him to pay extra attention to stories coming out of Myanmar.

And when a military coup took place in Myanmar on February 1, he began posting — on social media and various online platforms — news and information about the ensuing protests.

I interviewed Crox about his efforts in enhancing communication between the two countries and his observations on the political situation in Myanmar. His responses have been edited for brevity and clarity.

Oiwan Lam (OL): Why do you feel the urge to bring news and information about the ongoing protests in Myanmar to Hong Kong netizens?

Ben Crox (BC): Myanmar is not very connected to the world. Even though Hong Kong is a major trade partner with Myanmar, most of my peers in Hong Kong never talk about Myanmar. But in recent years, the country has been a new tourist site for young Hongkongers. For a few, they may also travel to Myanmar for religious retreat or for causes related to humanitarian aid.

The COVID-19 pandemic has hit Myanmar hard and I have been donating to help some of my Myanmar friends. But when the military suddenly takes over, the money wiring channels are blocked. The only thing I can do is to help Myanmar people spread their voice and news.

I believe what has happened in Myanmar would echo in the minds of many Hongkongers, because our rights, our freedom, our hope for the future are also being deprived by similar institutionalized state violence.

The protest scenes in Myanmar look similar to Hong Kong. Many of my Burmese friends are eager to learn from Hong Kong’s protest experience and they have been trying to link with the Milk Tea Alliance, an online network of pro-democracy netizens coming from Taiwan, Hong Kong, Thailand and India.

People from many Asian countries share the dream of establishing a clean and democratic government, with which fair opportunities and variety will be ensured. And I share this dream as well.

OL: The internet in Myanmar has been disrupted since the military coup. How do you get the latest updates? How do you make sure that the information is reliable?

BC: The internet in Myanmar has been disrupted, but it has not been completely cut off. The Junta want to keep the foreign factories and facilities running. At the same time, a lot of small businesses also heavily rely on the internet. In the first phase of disruption, only the mobile network was affected, while wifi and some fibre networks were still functioning. We later learnt that the mobile internet has been filtered with some old version of Chinese-style Great Firewall. But that has not stopped people from connecting through VPNs. Recently, the military is trying to set a new norm with a complete shutdown of the internet after midnight from 1 a.m. to 9 a.m. But internet access during office hours has not been compromised yet.

So I can still receive a lot of instant updates from multiple sources. Most are shared on Facebook groups, personal feeds of my connections. Many English-speaking Myanmar netizens, especially those with journalistic background, also use Twitter as a civilian reporting channel.

Myanmar people are well aware of the Junta tactic of spreading disinformation. Quite frequently, they would warn each other against the so-called “psy-war” — the term refers to the psychological effects of disinformation. Most people are willing to take down the news if others have expressed doubts. I have also edited or taken down information on my social media timeline upon getting messages from my Burmese friends. If possible I would share videos that could be verified with other videos taken with different angles on the same spot from different sources. Usually, such verification process only takes a few minutes since many protesters recorded or live-streamed the protest scenes with their smartphones.

OL: In the past few days, reportedly the Myanmar military government has open fired and killed more than 50 protesters. How do you feel about the situation? Do you think the protests will still go on?

BC: Bloodshed happens every day. Some stringent sources have estimated over 50 martyrs, while hearsay said the figure was double. Videos and photos circulating online have proven that the military crackdown was extremely bloody and brutal. However, such a bloody crackdown is not new in the history of Myanmar and people are not backing off.

I still remember in January 2017, one day right after I landed in Yangon, Ko Ni, a prominent Muslim lawyer and an advocate of constitutional reform, was fatally shot outside the airport. A few of my friends were close to Ko Ni and were hit by the loss of a dear friend and a great leader. But they live with the pain and take it as drive for their continuous fight for a better future. They were not ruined in 2017 and now their ire is turning into fire.

In addition, Myanmar Generation Z is fearless and they have full support from the older generation. The junta cannot stop them and now the younger generation is joining them. The solidarity among protesters is invincible.

OL: You have participated in several rounds of discussion on Myanmar protests on social media platforms such as Clubhouse. What has been accomplished through this cross-border dialogue?

BC: During the discussion I tried to help people from outside of Myanmar to better understand the country’s situation. I shared with them what I had learnt from my friends and my working experience in Myanmar and tried to explain the historical and political context of the protests. I also explained the relationship between the protests in Hong Kong, Thailand and Myanmar, in particular on how Myanmar protesters were eager to be connected with the Milk Tea Alliance and other pro-democracy movements in Asia.

I believe that Hongkongers can help Myanmar’s protesters and bring more international media attention to the situation in Myanmar. While a huge amount of visual images about the military coup and people’s protests have been circulating on Twitter and Facebook, the stories behind the images need to be told and explained. Hongkongers can play a good role in distributing and bridging the information.

OL: You have been paying close attention to protests in Hong Kong, Thailand, and Myanmar. How do you compare the pro-democracy movement in the three countries? Do you observe any interactions among protesters or pro-democracy activists across the three regions? Will such interactions bring positive changes in Asia?

BC: Protests in Hong Kong, in Thailand and in Myanmar are quite different as the three regions have different political systems, but protesters from the three regions share common goals. Exchanges among activists could help reflect on the inadequacy of local protests and develop a wider horizon in understanding the significance of the pro-democracy movement in Asia.

For example, the divide between pro-independence and moderate democrats in the Hong Kong protest movement has destroyed the internal communication of strategies and tactics within the movement to the extent that no one could bargain or negotiate with the government. The pro-democracy sector in Myanmar used to have a lot of racial conflicts. But now more than 90 percent of people are united against the coup, that's their advantage.

I believe that protesters in Asia can learn, inspire and support each other in future struggles for democracy. The democracy movement against authoritarian regimes in Asia is up and evolving, a new generation of activists has shown their determination and capability. The future is on their side.