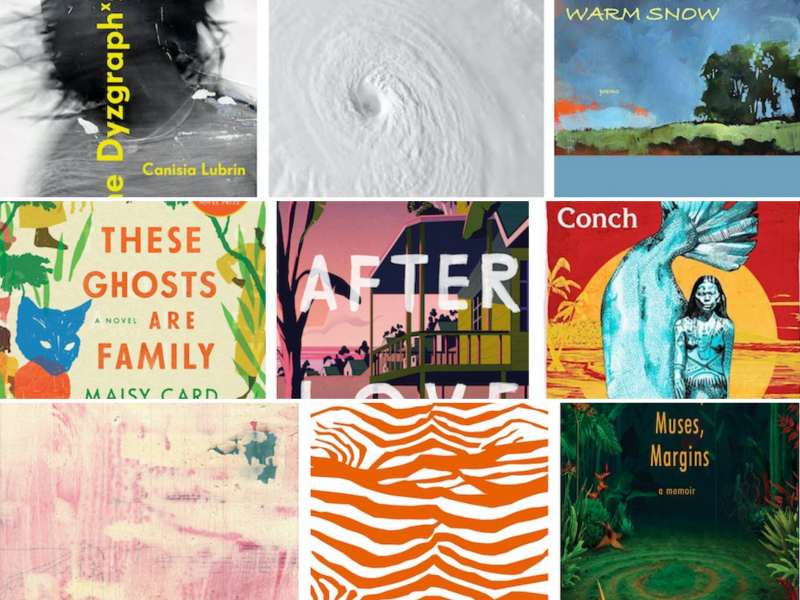 Covers of the books that made the longlist of the 2021 OCM [One Caribbean Media] Bocas Prize for Caribbean Literature. Image courtesy Bocas LitFest, edited and used with permission.

Although writers from five different Caribbean territories have been longlisted for the 2021 OCM [One Caribbean Media] Bocas Prize for Caribbean Literature, writers from Trinidad and Tobago have secured the lion's share of places for a prize, now in its eleventh year, that is widely considered to be the foremost literary award for Caribbean writers.

Worth $10,000 United States dollars, the prize celebrates books in three genres—poetry, fiction, and literary non-fiction—published by Caribbean authors in the preceding year. Of the nine that have been longlisted for the 2021 prize, five are by Trinbagonian writers, with the others by authors from Dominica, Guyana, Jamaica, and St. Lucia.

The festival itself, which because of the COVID-19 pandemic will happen virtually for the second year in a row, will take place from April 23–25. The overall chair of this year's panel is Vahni Capildeo, winner of the 2016 Forward Prize.

The poetry longlist ranges from a debut writer to a literary veteran, with the chosen collections covering a range of topics. “Guabancex”, named for a Taíno storm deity, is the first collection by Celia Sorhaindo, a poet from Dominica. Her book was inspired by the devastating impact on the island of 2017’s Hurricane Maria.

The judges for the poetry panel, which include Jamaican poet and panel chair Opal Palmer Adisa, Trinidadian poet Danielle Boodoo-Fortuné and Guyanese-Canadian writer Kaie Kellough, felt that the form and expressions of Sorhaindo's poems captured “the vastness and the vulnerability of life on an island [by] convey[ing] a collective trauma that moves through and beyond pain and loss to what is valuable and possible.”

“The Dyzgraphxst”, the second offering by Canada-based St. Lucian Canisia Lubrin, was described by the judges as “a journey where meaning is often an unpaved road, but the ride is richly satisfying”, while “Country of Warm Snow”—the sixth book by Trinidadian Mervyn Taylor—explores the experience of living between two countries over five decades. The judges described the collection as “a rare book that reads with deceptive ease […] mov[ing] fluidly across time and borders while being rooted deeply in place.”

Wasafiri editor Malachi McIntosh chaired the fiction panel, the judges of which included Roland Gulliver, director of the Toronto International Festival of Authors, and writer Tiphanie Yanique from the US Virgin Islands.

The longlist for this category included two debut novels and the latest book by a former winner of the OCM Bocas Prize. “These Ghosts Are Family,” the first book by US-based Jamaican Maisy Card, delves into the entanglements of a family over the course of several generations. The book impressed the judges for the innovative way in which it tackles “the story of Caribbean enslavement and the legacy of trauma it has passed down from generation to generation.”

The UK-based, Trinidad-born writer Ingrid Persaud was lauded for “creat[ing] characters that we truly care for” in her debut novel “Love After Love,” while her compatriot Monique Roffey, also based in the UK, made the cut with her latest offering, “The Mermaid of Black Conch,” which has been very well received and recently won the Costa Book of the Year.

No stranger to literary acclaim, Roffey won the OCM Bocas Prize back in 2013 for her novel “Archipelago.” Of her latest book, the judges said it “reads like the work of a novelist in command of her material and focused on using a mythic ‘then’ to speak to now.”

United States-based Trinidadian Katherine Agyemaa Agard‘s memoir “of colour,” which cleverly incorporates visual material into the narrative, was deemed “boldly experimental,” while Andre Bagoo‘s “The Undiscovered Country” resonated as a “wonderfully intelligent” collection of diverse essays on everything from art to politics: “Where else would you find Trinidadian street food in the same volume as an appraisal of Thom Gunn's poetry, or Dylan Thomas rubbing shoulders with soca?”

Finally, the eminent Guyanese-born, Trinidad-based literary scholar Gordon Rohlehr‘s memoir “Musings, Mazes, Muses, Margins,” came across as an autobiography told through a split personality and a dream diary juxtaposing J'ouvert, the pre-dawn ritual that heralds the start of Trinidad and Tobago Carnival, with the “gleeful frenzy” of the main Carnival stage, and the solemnity of Ash Wednesday—the official start of the Lenten season that seals off the country's annual street festival.

The shortlist for the OCM Bocas Prize will be released on March 28, with the winners being announced on April 24, during the virtual festival.