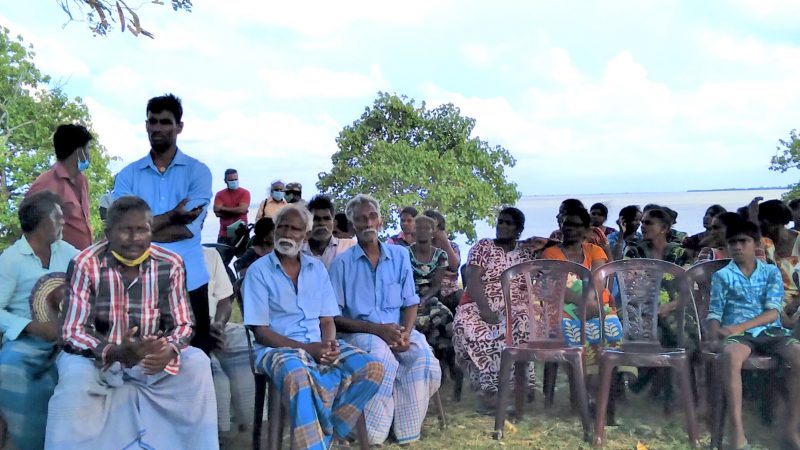 A section of people from Iranaitivu island, located in the Gulf of Mannar in northern Sri Lanka. Image by Ruki Fernando via Groundviews [1], used under a content-sharing agreement.

On March 2, the Sri Lankan government announced that it would allow the burial [2] of COVID-19 victims from Muslim and Christian communities at one location—on the “thinly populated” island of Iranaitivu in the Gulf of Mannar, 300 km from the capital, Colombo.

This decision came after the country lifted an 11-month ban [3] on the burial of COVID-19 victims, on February 26. The ban had been in place partly on the premise that burying those who had died from the disease might lead to contamination [4] of the groundwater, but it went against religious practices [5] of the Muslim and Christian minorities in the majority Buddhist country.

However, the islanders of Iranaitivu, home to around 360 families, protested against [6] the government’s decision to use the island as a burial site, many claiming that this would create a division in the solidarity between the ethnic Tamil [7] and Muslim [8] communities — the government had ignored areas suggested by the Muslim community, choosing instead a Tamil area, that is still reeling from the effects of prolonged military occupation and the Sri Lankan Civil war [9].

Dr Kumaravadivel Guruparan, Former Senior Lecturer in Law at the University of Jaffna tweeted in agreement:

Correct. The intention is to divide the new found solidarity between the Tamil and Muslim communities on the very same issue that brought them together. https://t.co/iLQDwOlLds [10]

On March 5, Fisheries Minister Douglas Devananda came out in support of the villagers saying that [12] the Iranaitivu island was not suitable for the burial of COVID-19 victims. Three days later, he confirmed [13] that the government had suspended the decision to bury victims of the disease on the tiny twin-island.

On March 8, government authorities stated [14] that they were no longer considering Iranaitivu as a burial site and started [15] burying COVID-19 victims at Oddamavadi [16], a town located in the Batticaloa district in the Eastern Province of Sri Lanka.

Why people in Iranaitivu protested 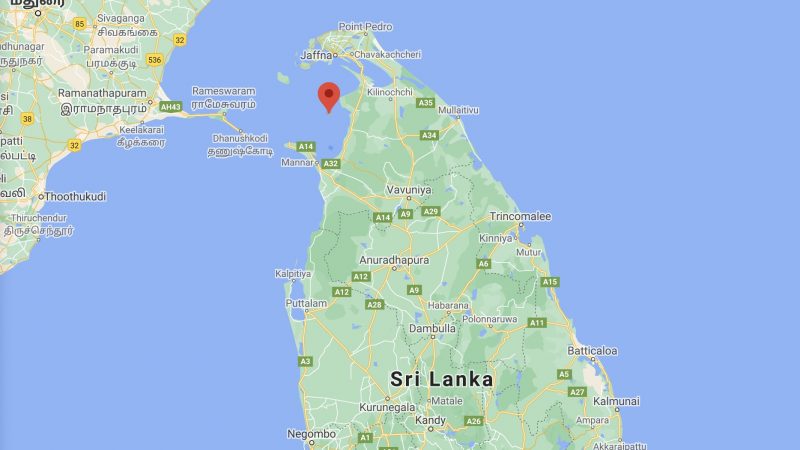 Iranaitivu [18] (or Iranaitheevu) is a double island, and its north and south parts (Periyathivu and Sinnathivu) are joined by a small piece of land. During the 30-year long Sri Lankan Civil War [9] (1982-2009), the island, mostly inhabited by a community of ethnic Tamil [7] fishers, was within the area of military conflict. In 1992, a naval base [19] was set up there and the islanders were relocated, forced to abandon their homes and cattle.

In April 2018, a predominantly female group of about 300 former islanders accompanied by Roman Catholic priests, fishers, local journalists and civil rights activists in a 40-strong fishing boat flotilla [20] had arrived on Iranaitivu to re-establish residence there. But they were sent back by the navy. However, after a month, the government allowed the former inhabitants, even those without land titles, to stay. During the following years, the government and the navy began to rebuild some infrastructure for the population.

The locals raised several concerns [6] in their protest against the decision to use the island as a COVID-19 burial site.

The people of #Iranaitivu [21] appeal to the Govt to withdraw the decision to bury Covid-19 victims on the island. They state this would destroy the land which they rely on for cultivation & cattle breeding and raise concerns over transporting infected bodies 20km across the sea. #lka [22] pic.twitter.com/B6YTkmOW8H [23]

The villagers continued their protests [25] even as the navy started digging the graves.

Graves dug in #Iranaitivu [21] by #lka [22] #Navy [29] to bury victims of COVID-19, are being closed up by local villagers today, in protest of the Govt. decision to bury COVID victims on the island. pic.twitter.com/LQd2cpZtyI [30]

Journalists and activists were prevented from visiting the island amid the protests.

Happy to visit #Iranaitheevu [35] today & join residents in protest (day7) against using the island as a graveyard for COVID dead. “We will jump into holes dug to bury COVID dead bodies” said some women. They await official notification COVID dead will not be buried in the island pic.twitter.com/77lHz7eISr [36]

Fernando also highlighted the withholding of basic infrastructure development on the island by successive governments in a photo story published [1] in Groundviews. 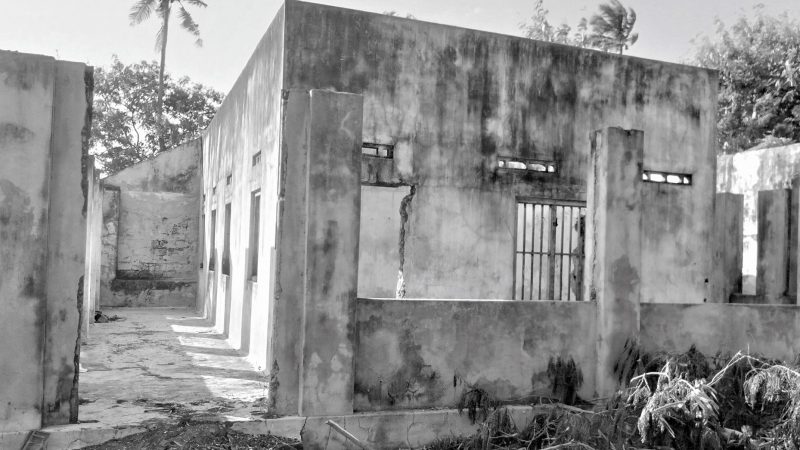 The Holy Family Convent is now in ruins. Image by Ruki Fernando via Groundviews [1], used under a content-sharing agreement.

The ban on burials

Despite opposition [38] from the Muslim community [8] (10 per cent of the population), Sri Lanka amended [39] the Quarantine and Prevention of Diseases Ordinance in April 2020, to make cremation compulsory for those dying from COVID-19. Some health officials cited the fear of groundwater contamination [4] behind the decision. Leaders from the Muslim communities and the civil society pointed out [5] that Islam prohibited cremation and the decision contravened the World Health Organisation (WHO) guidelines on COVID-19 deaths which allowed both cremation and burials.

Sri Lanka's requirement to cremate anyone who dies from Covid-19 goes against public health guidelines and discriminates against the Muslim community, whose tradition requires burial. @WHO [40] guidelines dispute the government's claim of a health threat. https://t.co/P20CyGtrka [41] pic.twitter.com/I1vTtRYVu4 [42]

There were numerous online and offline protests [44] in the country demanding burials be allowed. Blogger Amalini De Sayrah [45] tweeted about one such protest in December 2020.

THREAD: Today a group of 30 people—masked and distancing as best as possible—tied white cloths on the gate of the Borella Kanatte crematorium, asking GoSL to #StopForcedCremations [46] and in solidarity with Muslim families whose loved ones were forcibly cremated. #lka [22] #srilanka [26] pic.twitter.com/kOk8DI84hi [47]

After months of pressure from local and international communities and the U.N. [49], the government reversed [50] the controversial order on February 25. Amnesty International said in a statement [51]:

“The decision (reversing the burial ban) is a testament to the tireless struggle of families of victims, activists, and members of the Muslim community.”